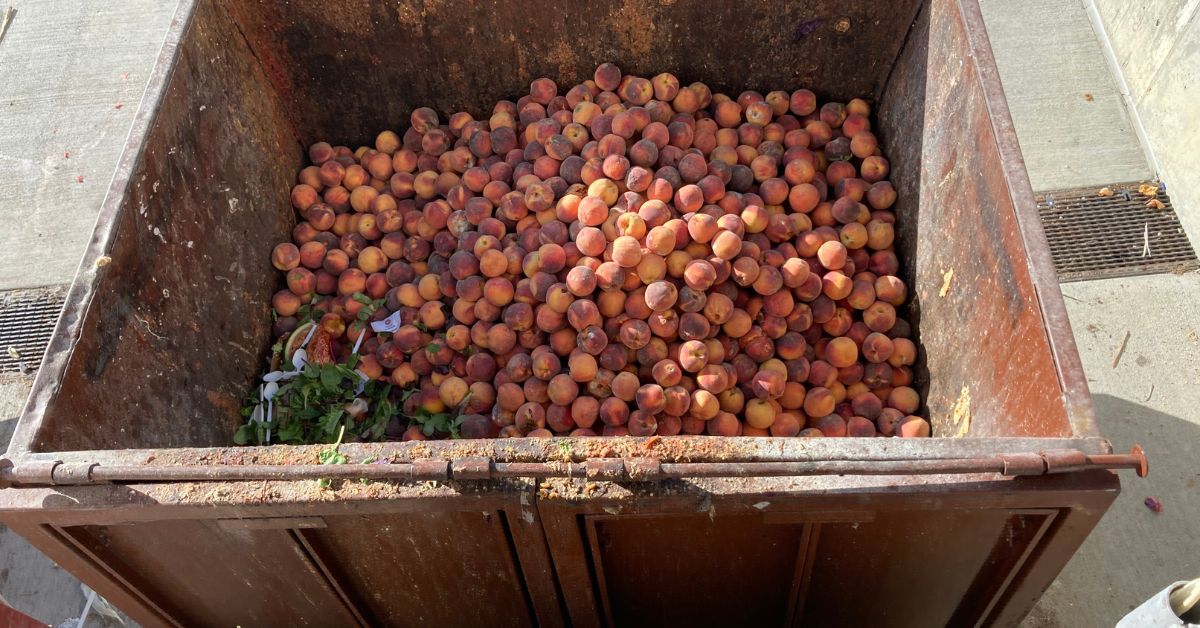 The push to compost as much food waste as possible in Boulder County suffered a setback earlier this year. The largest composting facility on the Front Range started turning away truckloads of food waste due to contamination. Some of those trucks were carrying food from school cafeterias, including from the Boulder Valley School District.

On a Wednesday afternoon in the produce washroom at the Boulder Valley School District’s Central Kitchen, Barbara Macleod was chopping celery and putting the butt ends of each bunch into a five gallon bucket at her feet.

“So I’ve got some parsley and green onions that are gonna be for Mediterranean rice and this celery is going in the marinara sauce,” said Macleod, a Kitchen Satellite Lead for the district’s food service.

She’s part of a small team with a big job: 17, 000 meals a day at over 50 schools.  That’s a lot of food and a lot of food waste: the district composted over six tons of it in October.

Another food service staffer, Mary Rochelle, takes me over to the loading dock where we peer down into the central kitchen’s compost dumpster.  We look over the edge of a loading dock  into a dumpster full of peaches.

“It looks like we have some peaches that went moldy in our storage, “ said Rochelle, the Communications and Fundraising Manager for the school district’s food services department.  “It’s such a bummer to see food thrown away.  These peaches were grown in Colorado, local farmers worked really hard…but it’s a much bigger bummer if it goes into a landfill.”

So instead of rotting in a landfill, these peaches are going to rot in a compost pile.

Kim Orr coordinates the school recycling and environmental education programs for local nonprofit Ecocycle. She says organic material in a landfill concentrates methane, a potent greenhouse gas.  That type of concentration does not happen in composting.

“In a landfill, it’s an anaerobic situation where there’s not a lot of oxygen present and that’s why the methane production is so much higher,” Orr said.  “Over the course of the landfill’s lifetime, methane production spikes and stays that way throughout the rest of its lifetime.  That doesn’t occur in a compost pile.  So if we can keep organics out of the landfill, we’re helping our environment immensely.”

Plus, Orr says the finished product is an important contribution to healthy soil.

“If we’re composting them instead of landfilling, we’re creating healthy valuable soil amendments for a state that has really crummy soil.  If we can keep that soil healthy, we can grow nutrient-rich foods as well as our soils being able to retain more water in a state that doesn’t have a lot of water,” she said.

But to get good compost, you need clean food waste without a bunch of other stuff mixed in.  That’s been a growing problem for large scale composting on the Front Range.  The school district’s Mary Rochelle says she saw the problem when she obtained some compost for her own garden.

“I got compost for the beds in my community garden.  I got buckets of it and we started spreading it out and my partner and I were horrified at the amount of glass and plastic and trash that was in their compost that we were putting into our garden,” Rochelle said.

“What we find is a lot of contamination of the front of house commercial and residential streams,” said A1 Organics Marketing Manager, Clinton Sander.

“The contamination is increasing to the point where we can’t manage it on our site.  We do have some amazing equipment that helps remove contaminants but we can’t get it all out.  And we’ve actually had a lot of expense this year in returned product and debris management on the site.”

So, just before the start of the school year, Ecocycle and the school district got word that A1 Organics had a new zero tolerance policy for contaminated compost. The school district stopped asking students to compost their lunchtime food waste in the cafeterias.  They still collect compost from the school kitchens and the central facility—like that dumpster full of peaches—but the 41 schools that used to ask students to compost their leftover lunches no longer do so.

Food service staffer Barbara Macleod says it’s no surprise that sometimes other items got thrown in with the food waste.

“Lunchtime is pretty hectic and those kids are in and out as fast as they can be. And I think that a lot of times when they are bussing their trays at the end of lunch, forks get missed or plasticware,” she said. “It’s a great program for students to understand where their food waste goes but unfortunately unless there’s someone there to police it, sometimes things just get missed.”

Over at Southern Hills Middle School in South Boulder, Chicken Ramen Bowl, Mac n Cheese and a fresh salad bar are all on the lunch menu.  While they wait in the lunch line, many of the students are not shy about sharing their opinions on the change in food waste collection.  Kate says it was hard for some students to get it right:  “It was too difficult because the students would throw all their plastic in there and all their like noncompostable containers, plastic bags and everything.  And so they just couldn’t sort through all of that.”

Annie says better signage would help kids understand what can and cannot be composted: “If they had signs that were like “These are the things you should compost” and then you would know what to put in the bin cuz it just takes an extra five seconds if you know what you’re supposed to put in there.”

Leo and Nate just wish the compost bin would come back: “It’s really wasteful cuz it used to go to useful places where they could make dirt out of it and help to grow more food.  But now it’s just nothing.  It might have been hard for some people to understand but it helped our environment and I would rather have some people throwing stuff in the compost and helping save our environment than having everything go to the trash.”

The end of cafeteria composting cut the district’s compost numbers almost in half.  Numbers from Ecocycle show that, in October, the district still collected almost 13,000 pounds of food waste from for composting.  But that’s a sharp decline from almost 24,000 pounds back in October, 2019, a pre-pandemic time when most school cafeteria’s were asking students to compost.

“We would love to bring it back to the cafeteria,” said Ghita Carroll, who oversees a wide range of sustainability issues for the Boulder Valley School District.  “I think we would need to make sure we had staff or students or green teams—which we know exist in our schools—monitoring that waste collection. So that’s a big part of it because we know that even people with the best of intentions make mistakes.”

Carroll says there’s no specific timeline for returning composting to Boulder Valley school cafeterias but the district wants to be part of the community-wide effort to help make clean compost.

“We also really want to be working with the community to figure this out so that the schools are in line with what people are seeing in restaurants and in their homes and everywhere else,” she said.  “We don’t want to make any of these decisions in a silo.  We want to be supporting the community effort around zero waste and figuring out the best way forward.”

Because of compost contamination, the city of Boulder also dropped a requirement that food businesses have a compost bin in their public space. It’s possible the kids in the schools will figure it out faster and get back to composting before the grown ups do.