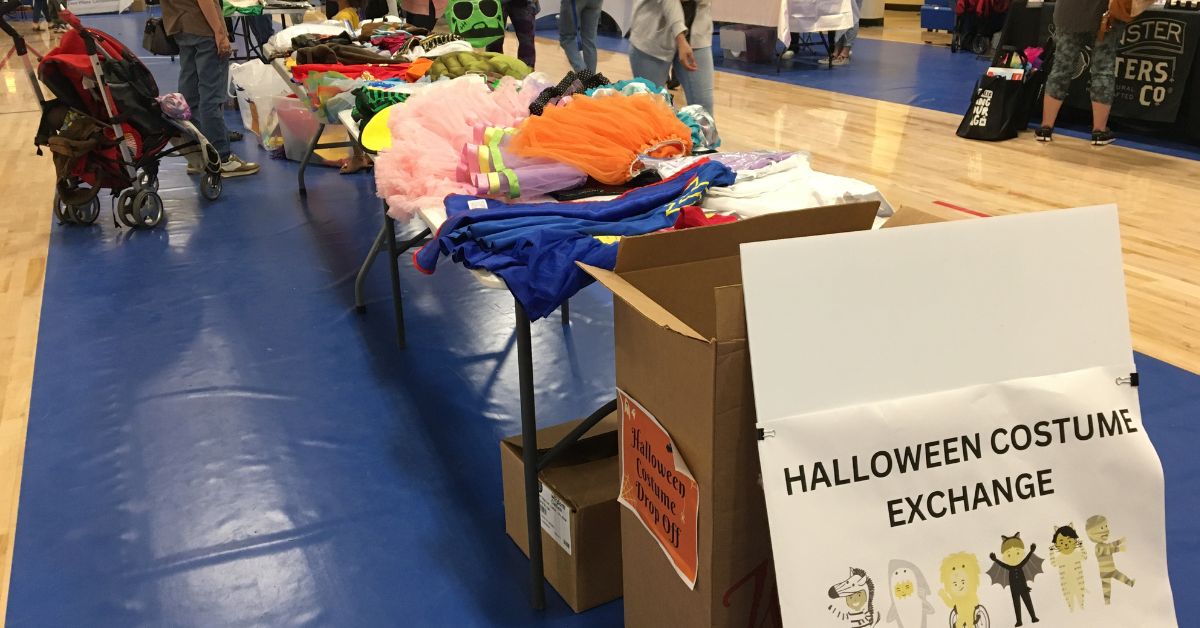 Holiday celebrations can produce a lot of trash. Think gift wrapping on Christmas or those plastic Easter eggs or balloons on Valentines Day. The aftermath of the next annual celebration heading to a landfill near you is Halloween. From plastic candy wrappers to styrofoam decorations, not much is recyclable. But some local organizations launched efforts this year to at least reuse key elements of the holiday. Shannon Young has the latest installment in our “Follow the Waste” series.

Crowds mill about tables set up in the gym of Centaurus High School in Lafayette while attendees chat with representatives from local groups and environmental organizations. The so-called EcoTober fair occurred earlier this month as a way of connecting Boulder County residents with local efforts to reduce carbon footprints and waste.

One portion of the gym had two long tables, racks and a donation box filled with clothing…but not the kind you’d wear every day.

Elizabeth Szorad, Sustainability Manager for the City of Lafayette, says her office is hosting its first-ever Halloween costume exchange, “to promote reuse and also to educate about fast fashion and also to give families costumes that they can wear for this year’s festivities.”

“We really want to promote reusing costumes,” notes Szorad. “A lot of people go out, buy costumes and then it sits in your Halloween bin for years and years to come because your children outgrow your costumes. It’s not in trend anymore. So this is an opportunity to reuse them.”

The cities of Lafayette and Louisville and the town of Superior teamed up to put costume donation drop boxes in strategic locations during the month of September. Szorad says they ended up with more than 200 costumes and were excited about the effort’s popularity.

One of the drop off locations was the Louisville Public Library. “We’ve had lots of really great response,” says library Community Engagement and Support Specialist Erin Owen. “We had so many costumes that were dropped off and people were really thankful that it was at a central location, somewhere that they’re all at anyway and it just made it really easy.”

The costume exchange table stayed busy throughout the EcoTober event; both with kids picking items out and adults dropping costumes off.

Among them was four and a half year-old Beau Benim, who selected a mixed ensemble of a pharaoh outfit, costume shoes and demi-mask sunglasses featuring the likeness of a popular animated dog. He says he liked the exchange, but that there were, “too many options.”

Beau’s mother, Kristina Martin, says she appreciated all of the various sizes and variety and will make sure to donate costumes for next year’s event.

The pilot project of the costume exchange was so successful, Sustainability Manager Elizabeth Szorad says she plans to do it again…and may even expand its scope to include Halloween decorations.

So if you’re not sure what to do with leftovers from this Halloween, you may want to look for drop boxes next September.