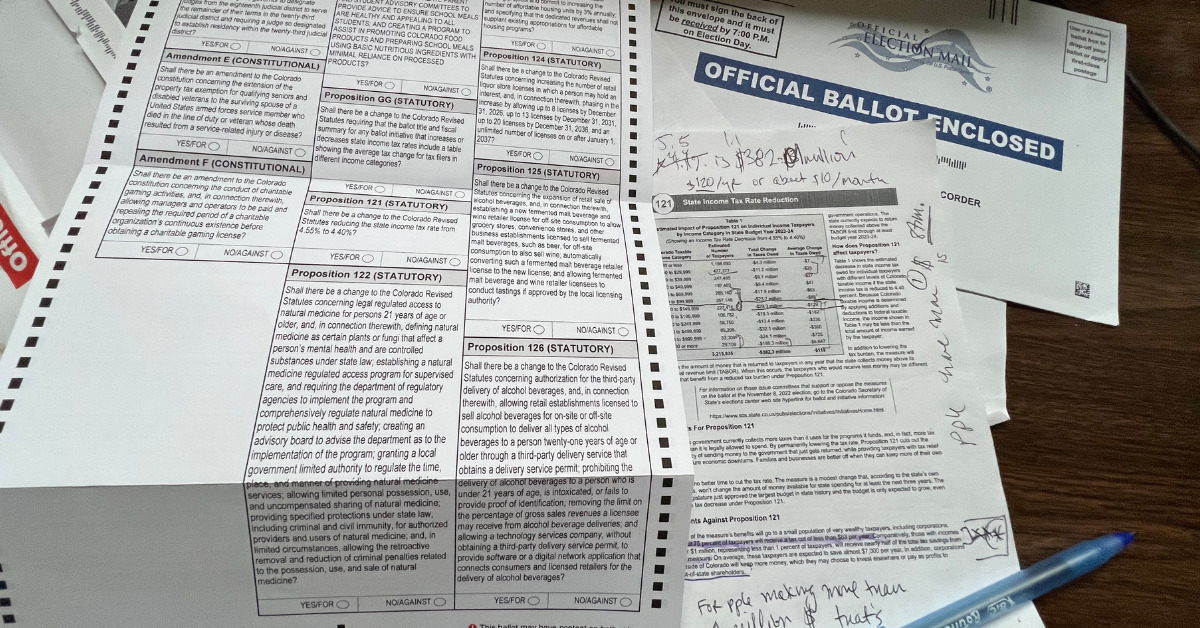 State Ballot Proposition 121 asks Colorado voters if they would like to decrease the state income tax rate. Supporters say the cut will put money into people’s pockets. Opponents say the tax decrease is actually a tax increase for most Coloradans.
They are asking voters to weigh in on another measure, Prop GG which will add a table to all income tax-related ballot measures in an effort to clarify how taxpayers will affect different socioeconomic groups. Alexis Kenyon has more. 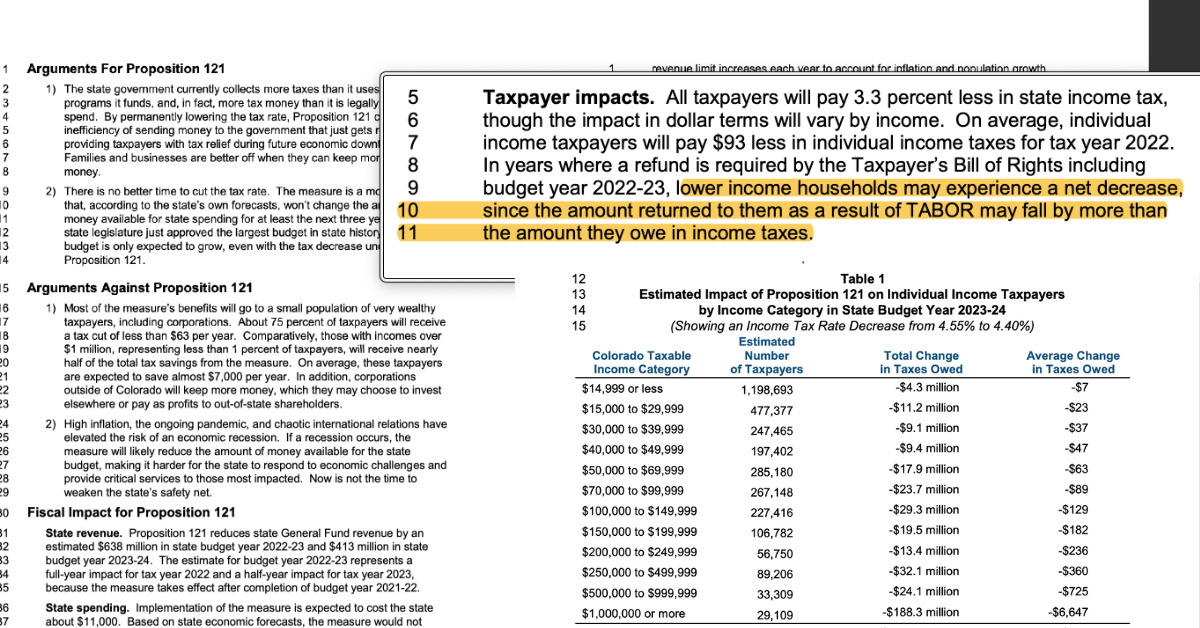 Alexis Kenyon: The passage of the Taxpayer Bill of Rights or TABOR 30 years ago created restrictions on the state income tax code in Colorado by design. One of those restrictions mandates that voters approve of any income tax increase. Another is that when the income tax proposal gets on the ballot, it must be written in specific language.

Elliot Goldbaum: “It has to be in all capital letters. It has to spell out the dollar amount of the tax increase, even if it were only paid for by super-rich people, would still have to say, ‘Shall taxes be increased by as many zeros as are in hundreds of millions of dollars?'”

“And so, a tax cut might sound appealing to a voter. That has a significant impact on voters’ willingness to support it, and it’s by design.”

Alexis Kenyon: Another thing TABOR codified was Colorado’s flat income tax rate. This flat tax rate means everyone pays the same rate regardless of income. Right now, that rate is 4.55%. Proposition 121, on this year’s ballot, asks voters to change that rate by about 0.11%, downto 4.4%. But Goldbaum says the wording of the question is tricky.

Elliot Goldbaum: “Proposition 121 looks fairly straightforward, ‘Shall your income taxes be decreased by this amount.’ Unfortunately, Voters do not get the whole story when they are asked that question because the amount of tax cut that somebody gets is wildly different depending on their income.”

Steven Byers: “What’s happening, really, is it’s taking away government revenue, but it’s increasing private sector savings. There will be more jobs generated by the private sector as they face a lower corporate income tax.”

Alexis Kenyon: And while the 0.11% tax decrease would mean private sector savings of about $383 million, Kristin Myers, a tax expert and editor-in-chief of thebalance.com, a personal finance and tax policy website, says Prop 121 would save Coloradans making $36,000/year, right around the state’s average income, about $3 a month or, annually, $36.

The bulk of the tax savings, more than half of the state’s lost revenue, would be returned to the top 1% of Colorado taxpayers.

Kristin Myers: “And so, again, in this idea of giving tax cuts because the money is going to trickle down, right? Trickle-down economics. In theory, it could work. The reality, however, is that’s not actually a hard and fast truth. What we do see regularly is that oftentimes corporations will take tax cuts, and they will run with them.”

Kristin Myers: “So we can do the math. You know, if Colorado loses $10 million in tax revenue from those tax cuts, then you’re essentially going to have 40 jobs created.”

Alexis Kenyon: But Proposition 121 isn’t the only tax question on this year’s ballot.Proposition GG attempts to clarify measures like Prop 121 by requiring that all income tax-related ballot measures include a table that breaks down how changes to the tax code would impact eight different income brackets, information that’s already included in the ballot blue book. Goldbaum says, especially this year with Prop 121 on the ballot, voters deserve to understand what they’re voting for.

Elliot Goldbaum: “Right now, voters are gonna be asked, ‘Shall your income taxes be cut?’ and if they vote yes for people who make under $91,000/year, they will probably actually get less money from the income tax cut than if they just voted no, or if the law didn’t change at all because of the TABOR rebates that are scheduled to go out next year.”

“And I’m not sure whether GG would actually give them that particular information or not. However, at the very least, they should know the dollar amount that they would perceive from a tax cut or, on the other side, whether they would actually be subject to a tax increase if it was to pass.”

Alexis Kenyon: Stephen Byers of Colorado’s Common Sense Institute says as far as adding a tax table to spell out how taxes would affect different income levels, he can see why people would want that.

Steven Byers: “I think it depends on where you stand. If you’re in the camp that taxing people who make good incomes is a good thing then, you probably want to, uh, show these income categories. But if we’re in the other hand where it’s like, well, you know, continuing attacks is not a good thing, then you might want it to be more opaque.”

“I mean, personally, I think people oughta have to take a little test to make sure they understand what the ballot measure even says before they can vote on it. And I think a lot of people just see headlines like ‘Free Lunch’, ‘Oh wow, that’s a good deal. Let’s do it. So, it’s like Margaret Thatcher said, ‘Socialism’s great until you run out of other people’s money.'”

Alexis Kenyon: Elliot Goldbaum of Colorado’s Fiscal Institute says he doesn’t think it’s a coincidence that the people who are for Prop 121 have come out against Proposition GG.

Elliot Goldbaum: “I would just say to conservative groups that are annoyed by Proposition GG, why are you proposing these measures that aren’t actually helping people that you say that it’s gonna help? All you gotta do is come up with tax policies that actually give the most benefits to the people who need it and not to rich people.”

Alexis Kenyon: A recent poll by Strategies 360 found that 65% of Republican Democrats and independent voters in Colorado support adding a tax table to the ballot. Whether that poll majority translates to policy changes that the ballot box remains to be seen.