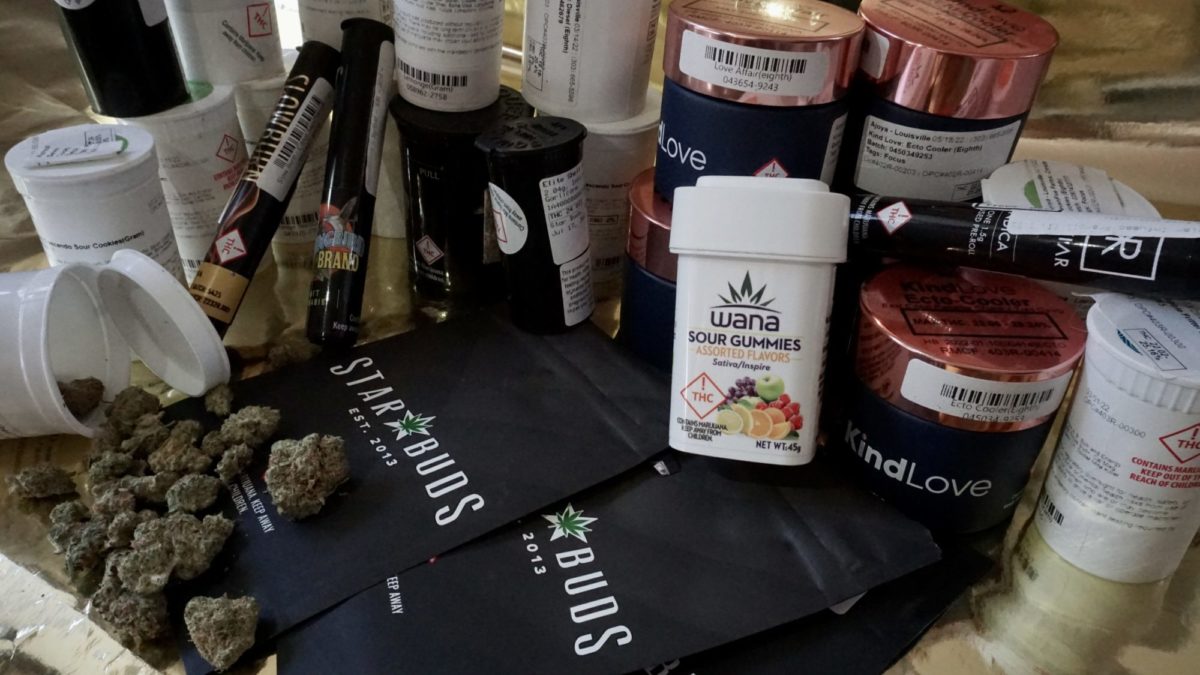 The cannabis industry and its fans have a reputation for being treehuggers and earth lovers. Despite its green image, legal marijuana has a massive waste problem, but the industry’s unique passion for the environment may motivate cannabis businesses to inspire changes in package norms well beyond the dispensary. As part of our Follow the Waste series, KGNU’s Hannah Leigh Myers reports.

Visit almost any dispensary, like the Star Buds in Louisville, and you’ll end up standing in front of a massive assortment of multicolored containers. Edibles, joints, flower, vapes and concentrates – all sold in uniquely designed packaging made of all sorts of materials.

Considering Colorado is predicted to sell around 1.8 billion dollars of marijuana products this year, and that’s a three year low, the amount of these containers going out dispensary doors across the state is pretty staggering.

According to the Colorado Department of Public Health and Environment, in 2019 the cannabis industry was producing around 7.3 million pounds of marijuana plant waste per year. The year before, Denver officials found cannabis grow operations accounted for 4% of the city’s overall electricity use.

But when Wahdan says there is tremendous waste in the marijuana industry, he isn’t even specifically referencing any of that plant or energy waste. He’s just talking about the packaging. Packaging that, at least in Canada and possibly in the U.S., is outpacing the sale of the actual cannabis products per gram.

”Just thinking about how many joints are sold in the state every day. You know, we’re constantly buying these cases of 600 to 900 units of tubes, they’re called ‘dube tubes’, and it’s a waste, it’s a big waste in this industry. And where are those tubes going? We’re not reusing them. Obviously, we do it for the right reasons. We do it for safety, right? But, there’s gotta be a better way.”

Wana Brands, based in Boulder, is likely the largest edibles manufacturer in North America and they are trying to find a better way. “We, as Wana, are dedicated to leaving this earth as best we can,” says Joe Hodas, chief marketing officer for Wana Brands. According to the Calyx website, an “organic additive that attracts microbes” helps to accelerate the degradation of their containers in “biologically active” landfills.

But ask recycling center leadership, like Marti Matsch, Deputy Director at Eco-Cycle in Boulder, about those “accelerated degradation” containers and you’ll likely be met with a sign of disappointment. Matsch and other recyclers have serious concerns about containers like these and others they categorize as bioplastics.

“When you landfill them, or if they become litter, biodegradable plastics will eventually *quote, unquote* ‘Biodegrade’ in that they will break down and seemingly go away and disappear. Which might sound great, but now we’ve introduced an even greater polluting threat to the environment because while the plant-based polymers biodegraded and disappeared the petroleum-based elements didn’t biodegrade, they’re still there and are now microscopic microplastics.”

Matsch says humans can end up inhaling, consuming or otherwise absorbing these microplastics. Calyx Containers distances their product from biodegradable plastics. The company claims their product breaks down into biomass not microplastics. However, Ecocycle’s Matsch adds that plastic recyclers are often reluctant to repurpose biodegradable and any bio-infused plastics because they are designed to be less durable than traditional petroleum-based plastics.

“So they have the potential to weaken the structural integrity of new recycled plastics. So while it sounds like a great idea, biodegradable plastics that use both plant-based and petroleum-based polymers, really aren’t better for the environment or for recycling and in fact they might be worse for both.”

Joe Hodas says Wana is trusting Calyx to take on the heavy lift of staying in touch with what recycling experts suggest for eco-friendly containers. Wana is pretty busy keeping up with the massive amount of regulation in the cannabis industry; Regulation Hodas says is also a major contributor to the waste problem.

“Each state tends to like to mess with the regulations on a regular basis,” Hodas explains. “So when we have the artwork that has, let’s say, fruit on it and the state says, well, we’ve decided that fruit is not a picture that we can have on the packaging, well, suddenly we’re holding 50,000 units that already have fruit on it. That’s where a lot of the waste in this industry comes into play is every time there’s a change to regulation, Wana and every other manufacturer out there, probably has a lot of packaging that’s already been built and a lot of that ends up going to waste, and that’s a real, real problem.”

So while marijuana companies try to comply with regulations requiring everything from child-safe seals to containers you can’t see into, it seems cannabis companies may be unknowingly producing millions of pounds of packaging unsuitable for single-stream recycling. That’s where companies like Green for Green come in.

“We’ve captured roughly around 25 tons of plastic, and that’s specifically plastic, and then there’s glass that weighs a lot more,” says Shawn Naughton, founder of Green for Green, a company that puts receptacles in dispensaries where consumers can dump their various cannabis containers.

The Green for Green team sorts through those containers and determines what’s trash, what’s only suitable for repurposing into something else and what can be reused.

“We created a proprietary process that removes the labels, then we clean them, sanitize them and reboxed and put back in the market,” Naughton explains.

But, Green for Green, Eco-Cycle and Wana Brands all seem to agree with something Bob Wahdan from Star Buds dispensary said earlier…there’s gotta be a better way.

Two ideas come up again and again – creating a set of standardized, regulator-approved containers of various sizes designed for recyclability and/or the possibility of personal containers cannabis users can get refilled at the dispensary. Both ideas would require an enormous effort from all parties to get approved but there is unique interest within the cannabis industry to take on the challenge considering the potential to initiate broader change in packaging norms within and outside the cannabis industry.

“We here in Colorado could come up with a solution for the entire industry that others could follow suit,” says Marti Matsch from Eco-Cycle. “We could create something that really could also set a great example for other industries and other packagers. If we can work together with the cannabis industry to find a reuse refill model that we could then share elsewhere that would be amazing. And I think there’s tons of potential for us to do that.”

Confusion over what containers are best for the environment and the proper way to dispose of packaging is a problem that touches all industries, not just the cannabis industry. That confusion is felt at all levels, from the consumer standing by the bins all the way up to the product producer and even at the recycling center. So, maybe the message is this wild west of packaging, where every product is made out of who knows what and recyclers scramble to take what they can, isn’t working well … for anyone, but certainly not the planet. And, maybe the cannabis industry can lead the way to something better.