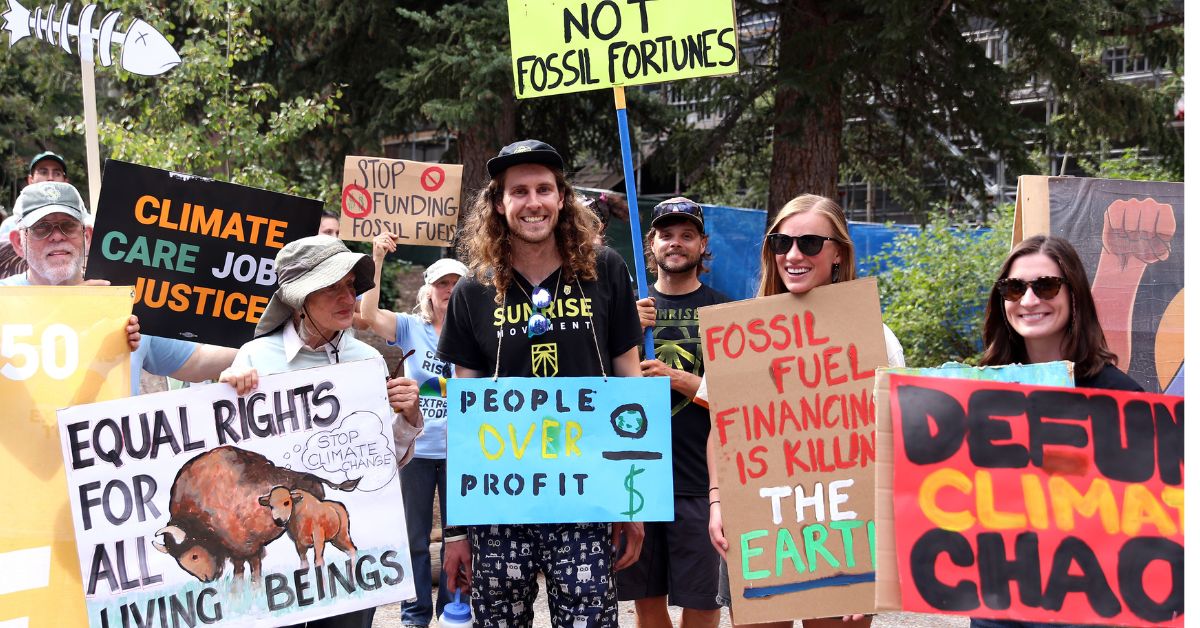 Central bankers and economic policy makers met in Jackson Hole, Wyoming over the weekend for the Federal Reserve of Kansas City’s annual symposium. Environmental organizers from Colorado and Wyoming gathered outside of the lodge in Grand Teton National Park to call for economic policies to transition away from fossil fuels. Kyle Mackie of KHOL Jackson reports for Rocky Mountain Community Radio.

Several dozen climate activists gathered Thursday outside of the Jackson Lake Lodge in Grand Teton National Park, where the Federal Reserve held its annual Jackson Hole Economic Policy Symposium through Saturday. The event is one of the most important conferences for economists and central banking officials from around the world, and it was even more closely watched this year as record inflation continues to hurt the U.S. economy.

Chanting slogans like, “Hey hey, ho ho, fossil fuels have got to go,” the activists came to deliver a clear message to Fed leaders.

“We would like to see stronger action from the Fed influencing the banks on limiting their fossil fuel financing,” said Emily Park, an organizer with 350.org’s Fossil Free Federal Reserve campaign. “There have been $4.6 trillion poured into fossil fuel funding since the Paris climate agreement [which went into effect in 2016], and the banks are showing that they are not going to stop unless some outside force makes them because they care about their profits first and foremost.”

Park and other speakers Thursday said the Fed should use its power to discourage banks from investing in fossil fuels and encourage investment in the communities hardest hit by climate change, namely low-income Americans and people of color.

“The Federal Reserve started having this meeting here in Jackson in 1982… in their literature, they were like, ‘D.C.’s so hot this time of year–it’s miserable,’” Yazzolino said. “So, they decided to move to Jackson for the symposium because you could still fish, it was cold enough to still fish the waters, [it’s a] beautiful place.”

“But what they came here to enjoy–the hiking, the fishing, the beautiful mountain views–are unfortunately changing,” Kerr added during her remarks to the crowd. “Just last summer, smoke from the historic wildfires in California and the Pacific Northwest completely masked the Tetons. Sweltering heat and ongoing drought depleted streams and river levels, and fishing was required to stop by early afternoon.” Protestors were restricted to a roped-off section outside of the Jackson Lake Lodge and were not allowed to congregate or demonstrate inside of the building. (Kyle S. Mackie/KHOL)

While the activists weren’t allowed to congregate or demonstrate inside the lodge, Park, of 350.org, said she hoped their presence will remind the academics and bureaucrats attending the conference that everyday Americans are “more than data points on a spreadsheet.”

For his part, Federal Reserve Chair Jerome Powell seemed to acknowledge the pain Americans are feeling from inflation–he used the word twice in his speech at the conference Friday, according to CNN. Analysts interpreted Powell’s speech to mean that the Fed is willing to raise interest rates again at its September meeting in order to rein in rising costs. A climate demonstrator holds a sign referencing fossil fuels that reads, “Keep it in the ground.” (Kyle S. Mackie/KHOL)