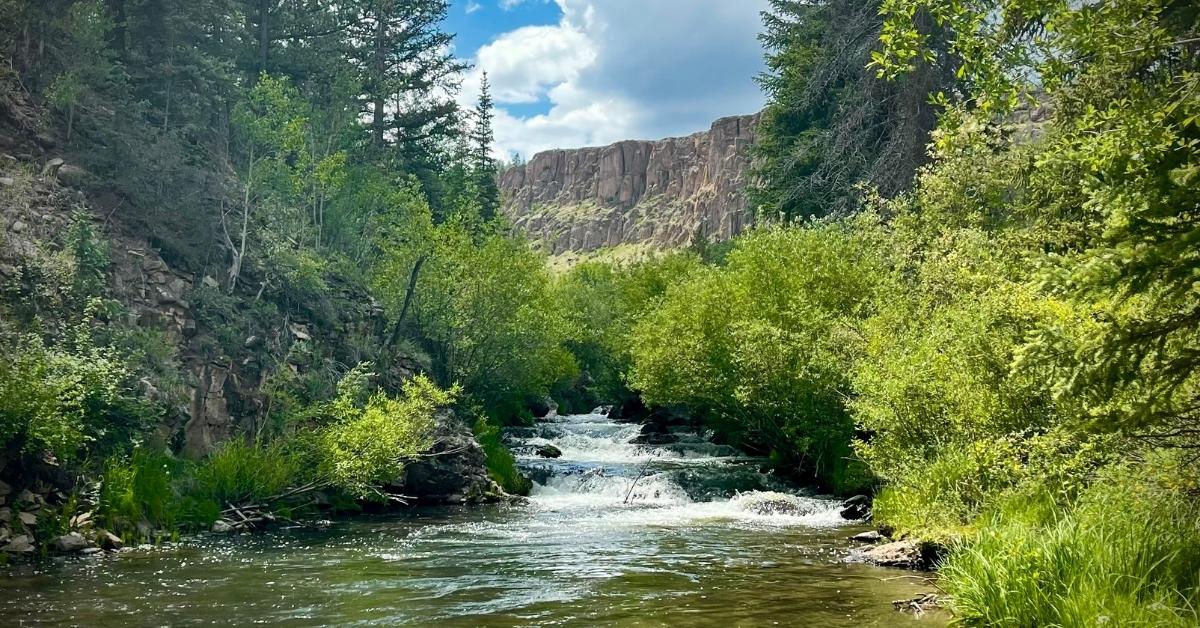 Prior appropriation is the water law in the West that determines how water is divided among users. The problem is most of Colorado’s water goes to agriculture and what’s left is becoming hard to find. Stephanie Maltarich of KBUT reports.

In the Upper Gunnison River Basin, the majority of the water that melts from mountains is used for agriculture. Fields are irrigated for pasture and hay to feed cattle on the nearly 100 ranches in the region. A centuries-old system determines who gets their first and who gets it last.

Just off of Highway 50, about 15 miles east of Gunnison, Greg Peterson toured = his family’s ranch, Peterson Ranch. The land is an intricate system of water-filled ditches that runs through thousands of acres. The property has about 15-20 ditches in total.

“So this is Tomichi Creek and the water is diverted out of it into the ditch that we irrigate with,” said Peterson.

Peterson’s parents bought the property in 1962, but the water rights tied to the land go back much further – all the way back to 1882. The ranch is one of nearly 100 small operations in the Upper Gunnison River Basin, most of which raise cattle and grow hay.

On a spring day in May, Peterson is awaiting peak water runoff, so far runoff has been slow to fill the ditches so he can irrigate his property. He explained how the water moves from the ditch onto his property.

“So we’ve created a dam in the river,” said Peterson. “And then the water goes down the ditch to where we turn it out in different places and irrigate with it.”

About 80% of the water that runs through the Colorado River Basin is used for agriculture. In and around the Gunnison Valley, the number is even higher, about 95%.

Colorado’s water law is called prior appropriation, and it dates back to the end of the 19th century. And in theory, it’s pretty simple. To get a right to water, it had to be diverted from a stream or river and put to use, like irrigating fields. The right was made official after a court process.

The system goes by ‘first in time, first in right.’ Those who came first have senior water rights. Latecomers were given junior water rights. On dry years, those with a senior right may use all of the water, and, junior users may not have access to any. It’s not a perfect system, but Greg Peterson said it works.

Peterson explained that when the water is short in the river, senior water rights holders control the system.

“If it wasn’t for that, it’d be chaos,” said Peterson. “So yeah, I’m a strong believer in the prior appropriation system.”

Stacy McPhail is the executive director of the Gunnison Ranchland Conservation Legacy. The organization was founded in 1995, and since then has helped ranching families conserve their lands and water from development.

“It helped keep ranching here, and agriculture as a part of our kind of rural economy,” said McPhail. “But it also helped make sure that the water could not be moved out of our basin.”

Keeping water in the valley tied water rights to the land, and prevented water from being shipped across mountains to an increasingly thirsty front range. McPhail says although a lot of water is used in agriculture, much of it is reused as it flows downstream toward Mexico.

“I’m not certain that everyone in the community or in the larger system of the state knows how recyclable that resource is, and how much we’re putting back into the river,” said McPhail. “It’s not just taking it out, you never see it again, it goes back and is reused and recirculated throughout.”

In the past, creeks have run dry, which kills aquatic life like fish and insects. They require a minimum amount of water called base flow to survive.

Enter Colorado’s Instream Flow program, which started in 1973. Instream flows give legal water rights to rivers and streams and has helped protect almost 10,000 miles of waterways around the state.

One family in the Gunnison Valley is teaming up with the state’s instream flow program. Jesse Kruthaupt’s family also owns a ranch along Tomichi Creek, and he is the upper Gunnison project manager for Trout Unlimited. About a decade ago, the ranch did something unique: it agreed to lease its senior water rights to the river during periods of low flow.

“So our irrigation right becomes instream flow for a period of time,” said Kruthaupt.

In response to the ongoing drought, the state has offered to pay ranchers to leave their water right in the river when levels sink to critically low levels. Kruthaupt said the program, which is facilitated by the Colorado Water Trust, has worked for his family. In addition to running a successful ranch, they also have an interest in the fishery through his work with Trout Unlimited.

But, Kruthaupt said every year it’s a continuous balancing act.

“We were compensated for leaving water in the creek,” said Kruthaupt. “But we have to purchase hay or rent pasture to make up the difference that year.”

Kruthaupt said leasing water to the instream flow program may not fit the bottom line for every ranch. But, creative approaches like this will be essential as an already stressed Colorado River system struggles to meet water demands.

KBUT’s Headwaters series was made possible by The Water Desk, an independent initiative of the Center for Environmental Journalism at the University of Colorado Boulder.