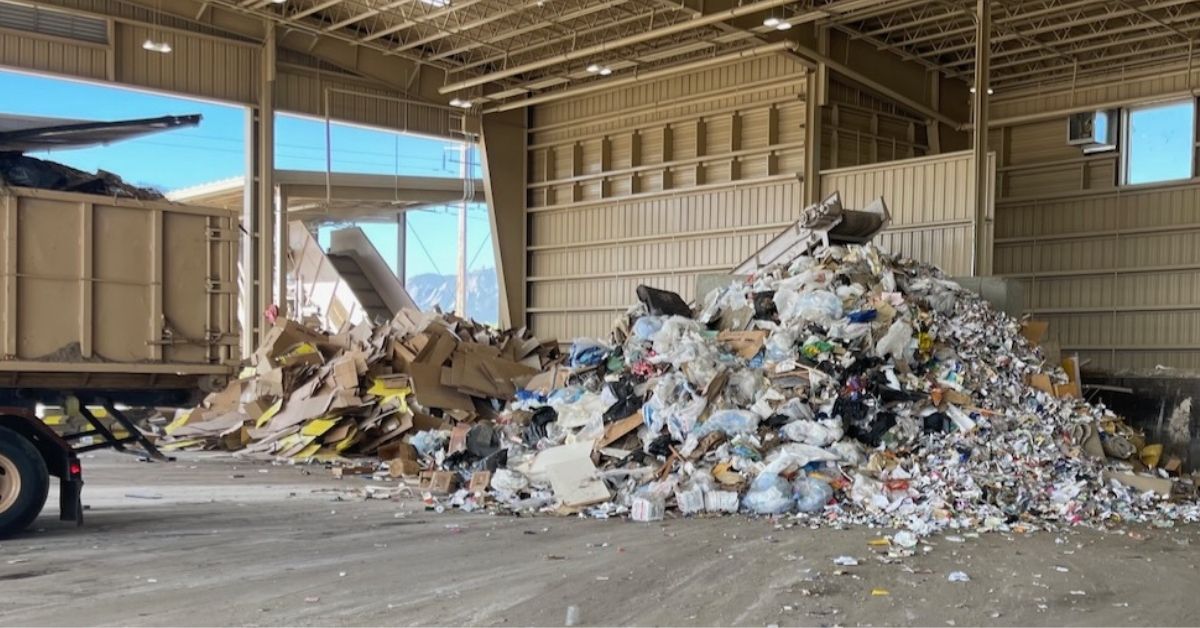 When the University of Colorado’s Spring semester ended in May, many students left town and also left behind tons of trash. As part of our Follow the Waste Stream series, KGNU’s Sam Fuqua looks at what happens to all the stuff.

Kathy Carroll, Community Relations Manager for Western Disposal, and I follow a trash truck as it starts and stops along an alleyway in central Boulder during what the city and Western Disposal Services call “the six-day review.”

The “six-day review” is what Western Disposal calls the six-day college move-out periods that occur twice a year in Boulder. During these times, in May at the end of the Spring semester and in August, as summer winds down, the students get rid of hundreds of thousands of tons of stuff.

It’s up to the commercial property owners to remove the trash and make sure the heaps of garbage don’t get too big or last for more than a day. They most often call Western Disposal services, which sends out a garbage truck like the one we are following.

Behind a small apartment building in the Goss Grove neighborhood, the truck stops at dumpster after dumpster, overflowing with stuff.

“It’s a pattern of moving in,” Carrol says. “Students buy everything they need from sheets to trash cans to dressers to hangers, all different types of furniture. When it’s time to move out, they don’t take those things home with them.”

Carrol and I follow the trash truck east to Western’s collection facility on 63rd. We stop in front of what looks like an open-air pavilion with a 20-foot-high mound of garbage beneath it. Carrol says they call the mound the tipping floor.

“So the trash trucks come in here, and they tip—they dump their load,” Carrol says. “Looking at these piles, I see quite a few mattresses. I see some furniture, some wood material that probably came from the six-day review. And, we collected over the weekend, so it’s very likely this is some six-day review trash.”

Off to the side, a pickup truck with a trailer is unloading next to a jumble of shelves.

“Look at all those bookshelves,” Carrol says. “That’s a lot of bookshelves just going to the landfill.”

Almost everything here on the tipping floor ends up in the Front Range Landfill about 15 miles east of Boulder in Erie.

It’s a different story on the CU campus. The dumpsters are bigger, but so is the recycling effort.

Angie Gilbert stands outside a dorm next to one of those big dumpsters you see at construction sites. It’s graduation day and the last day for students to move out of the dorms.

“It was completely full,” she says about the dumpster. “That’s been flipped four times today. So that’s 40 yards of trash. Some of them are 30 yards, going four or five times a day,” Gilbert says.

Gilbert runs the Zero Waste Program for CU’s Environmental Center. She’s been working twelve-hour days all week, coordinating a campus-wide effort to recycle and reuse as much of the student move-out stuff as possible. We head inside to the lobby of the dorm called Libby Hall. Gilbert leads me to a large clothing rack full of salvaged hangers that they plan to reuse in August. She points to another area in the room filled with stacks of books and personal care items. “It looks like a bit of a mess now,” she says, “because it’s pretty much done. But we will get all of this out, clean it up, and it’ll be ready for next year.”

Zero Waste volunteers will store items like hangers and mirrors for students to use when everyone moves back in August. The program passes unused personal care items and non-perishable foods to places like the Emergency Family Assistance Association in Boulder. They will send clothing, shoes, furniture, metal objects, and everything else they can to nonprofits or businesses that can reuse or recycle the materials.

Altogether, Gilbert says they find ways to either recycle or reuse almost one-third of the would-be move-out trash. “So in 2019, we sent about 130 tons to the landfill and salvaged about 44. So that’s a pretty good average, about 30%,” Gilbert says.

The last two years of the pandemic weren’t so good. When students moved home in the middle of the Spring 2020 semester, fears around COVID-19 transmissions meant everything ended up in the dump. The same thing happened last year at the end of the Spring semester in 2021 says Makayla Ortiz, an environmental studies major who volunteers with CU’s Zero Waste Program.

“I remember last year, my roommates were just throwing everything out and were just going to buy brand new things next year, which is kind of a waste,” Ortiz says.

Ortiz is one of the about 15 students helping Angie Gilbert organize reusable items. Ortiz says she was frustrated by how many reusable things her roommates threw away.

“They said, ‘It’s alright, doesn’t matter, just buy new things.’ And I was like, OK. Not much I can do at that point but tell them to at least donate it,” Ortiz says.

About 7600 first-year college students live in CU-Boulder’s 26 campus dorms. Will Thomas of Atlanta, and Mary Fancher of Vail, were two of the last to leave Farrand Hall this year. They said they weren’t aware of the effort to reduce move-out waste.

“I had to throw a lot of stuff away because I’m packing everything into my car, so I couldn’t take much,” Fancher said. “Everyone just left stuff in the hallway. Walking in there, there’s just trash everywhere.”

Inside Farrand Hall, white trash bags full of stuff lean in front of most dorm rooms. Unlike the organized effort in Libby Hall, two students rummage through a jumbled pile of discarded goods.

Soon-to-be sophomores Nathan Petrick and his friend Nick are pretty happy to find a skateboard and a Nerf gun in the pile.

Petrick, an engineering major from Boston, says he didn’t know there was a formal recycling program. He says he saw others leaving items, so he did, too.

“I saw that people were leaving stuff in the lobby,” he says. “My friends left a couch right here. It either got picked up or thrown away. There were bins up there for clothes and stuff. I put a bunch of my clothes that I’m never gonna wear again in there. “

Reusing and recycling 44 tons of material is a big deal but the fact that well over 100 tons is still going to the landfill prompts this message to her fellow students from move-out helper Makayla Ortiz: “I would say be mindful and smart in your shopping,” Ortiz says. “Think ahead in the future when it comes to move-out. And, do you really need that? Try and save some things. Things can be reused. You don’t need to buy the newest thing every year.”

Most off-campus rental leases are up at the end of July. So in a couple of months, neighborhoods with high numbers of student rentals like Goss Grove and University Hill will have a lot more things in the alleys and on the curbs to either reclaim or send to the landfill.