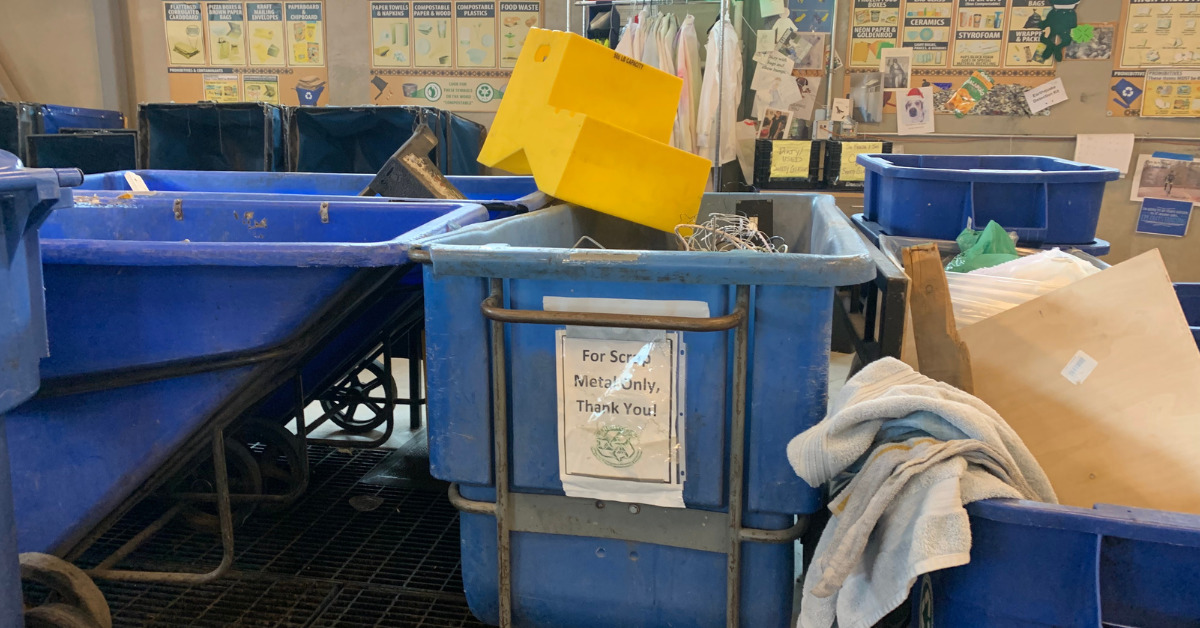 CU Boulder is its own jurisdiction within Boulder city limits. The campus has its own police force and its own fleet of garbage trucks. CU Boulder was also an early adopter of Zero Waste principals. So, what happens to the waste? Is it treated differently that the rest of the trash the city of Boulder generates? In our latest installment of our “Follow the Waste” Series – KGNU’s Ellie Stuckrath investigates how one of the most prestigious schools for environmental studies handles its trash.

Both CU Boulder and the county that surrounds it have expressed intent to reduce their waste streams to as close to zero as possible. The two entities share physical and geographic space, but the demographic of CU is significantly younger – and arguably more environmentally conscious – than that of Boulder County overall.

Jessica Bradley has been working with CU Facilities Management and Recycling for over 20 years. She began collecting office paper to recycle as a student at CU and now helps to manage the university’s Recycling Operation Center; also known as the ROC.

Students staff the center and sort the waste. “We’re a living, learning lab here at CU in multiple ways,” says Bradley. “So this is just one other facet of a student’s education or just learning about how intensive it is to sort through waste. And then also learn where it goes and also just promoting buying back post-consumer content, you know, close the loop.”

The ROC receives recyclable waste from all of the campus’s educational buildings, but Bradley notes dorms are an exception.

“For the residence halls, we have single-stream recycling at the docks or enclosures outside the rest halls and those are collected twice a week,” she says. The rest are delivered directly to the Materials Reclamation Center – aka “The MuRF” – otherwise known as the Boulder County Recycling Center.

Rick Kattar works there as a recycling operations analyst. He says their resources help CU recycle more products and achieve a greater yield: “That allows the university to expand their bucket of plastics from ones and twos to ones, twos, fours and fives, because we can now sort those very efficiently, which helped the university look at it differently and go, ‘Hey, we now have opportunity to yield more of those resins that we get.'”

Kattar says the partnership results in better recycling yields because the MRF has more advanced machinery and a more permanent trained staff able to properly train the students on efficient recycling techniques. The Boulder Recycling Center is able to recycle around 90% of incoming materials compared to the average of 20% to 30% at other recycling centers.

For the products that cannot be recycled, CU attempts to compost as much as possible, but the rest goes in the trash. CU’s Jessica Bradley says the university does not sort through trash or compost due to safety reasons.

While CU does have its own fleet of garbage trucks, the waste ends up at Western Disposal which consolidates it with other waste from Boulder County.

Cathy Carroll, the community relations manager for Western Disposal, says CU waste undergoes the same process as their other customers: “The material that CU brings in on their own trucks; they’ll bring it into our facility, which is our materials management center. It’s located at 2051 63rd street in Boulder. And they come in, they go over our scale, they tip their material in our transfer station, along with the rest of the material and the weigh out. So it’s really the same way that we treat the rest of the trash that comes into the facility.”

Western Disposal does not sort through the trash or compost either. Western Disposal will take the consolidated trash to the Front Range Landfill in Erie, and deliver compost to A1 Organics which takes it to their industrial composting facility in Keenesburg.

However, CU does document how much waste it produces. In 2020 to the 2021 year, CU had 3,630 tons of total waste; 923 tons were diverted from landfills for recycling and 732 tons for composting. Their overall diversion rate was nearly 46%, but Bradley said their goal is to eventually reach a 90% diversion rate.

She admits it’s a big goal, “but we’re trying to promote ways to minimize and also just education, making sure that students, staff, faculty – anywhere, anyone – on campus, try to make recycling as convenient as possible.”

While recycling has been a concerted effort on campus for years, it still is not always easy to recycle and recycle correctly. Sama Kareem, an Residential Assistant for the on-campus Sterns East dorm say, “it’s actually very difficult to recycle and compost in the dorms because there’s only two areas where they put them and. Further away from the trash, further away from the building, then the trash bins are so it’s much easier to just throw everything in the trash.”

Based on her observations, convenience is key to a successful waste diversion strategy: “They definitely could make more of an effort to put recycling bins in an accessible location. A big area where they could improve at least last year with COVID. I remember this was huge because we would have to use takeout boxes for the dining halls. And there was no compost on the way out of the dining hall. So everyone was just using recyclable and compostable bins, but putting them in the trash because you would have to go from the dining hall, building down through the basement and then to the back door, to the back area of where the composts are. So they just need to place them in easier locations.”

CU’s Associate Director for Campus Building Services Jessica Bradley says one of the biggest challenges to diverting waste and recycling is educating people about how to do it correctly.

Kareem suggests that RA’s could play a role in this. “I’ve never done anything to educate residents about it,” confesses Kareem. “I’ve never been told to. So I think they definitely could make more of an effort. Cause that’s the kind of thing that they could have as an event on, or like add more into one of the floor meetings.”

Bradley says that CU is always looking for new ways to educate people about waste diversion and recycling because it is most effective when individuals feel empowered and knowledgeable on actions they can take. And while still a ways off from its Zero Waste goal, CU’s self-reported diversion rate is 11 percent higher than the 35 percent Boulder County reports for its own Zero waste progress.