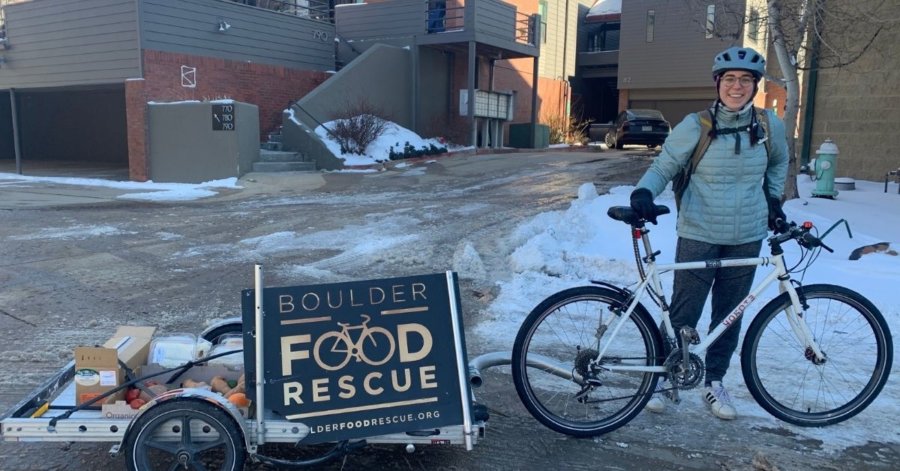 Food waste in the United States produces as much pollution as 37 million cars per year. That’s according to a report by the National Resources Defense Council which also found that redirecting just one-third of the country’s total food waste would be more than enough to provide food security for communities in need.

Boulder Food Rescue is a local organization working to reduce food waste through strategic – and energy conscious – redistribution efforts. KGNU’s Ellie Stuckrath has the latest report in our “Follow the Waste Zero” series.

Boulder Food Rescue volunteer Katy Tyler walks into Lolita’s Market, one of many local businesses that works with the nonprofit to help reduce food waste.

Boulder Food Rescue’s partner grocery stores set aside edible food with bruises or other cosmetic defects to redistribute to local residents in need. BFR volunteers pick up the food and then sort through it to discard whatever may be spoiled or unsafe to eat. They then drop the food off at a conveniently located community hub.

“I think BFR, as a whole, has a goal that they are meeting is that 90% of shifts are done on bikes,” says Tyler of her pedal-powered shift. Bikes are her preferred mode of transportation anyway, but a dedication to limit emissions is also part of the organization’s ethics.

To see how it’s done, I jumped on my own bike and tried to keep up with Tyler as she pulled a wagon behind her, soon to be full of food.

Our first stop was Natural Grocers where they gave us a box of produce to sort through.

“We sort through all the donations to make sure we are giving all edible food to the recipient,” says Tyler. Erring on the side of caution can prevent waste in the long run because sometimes clients will toss entire boxes of food over a few bad apples. “Sort of a rule of thumb is like only keeping stuff you would serve to your kids or thinking if something looks like it’s on the edge, we still would want the stuff to be edible in two days time.”

After a second stop, Tyler’s trailer is loaded with food and we head over to the nearest distribution site.

One local recipient of these food drop offs is Liliana Gayoso, who lives in an income restricted apartment complex. Speaking Spanish through an interpreter, Gayoso explains she started receiving groceries from Boulder Food Rescue during the pandemic and it’s made her and her family value food all that much more.

All of the drop off sites are selected by grocery program coordinators, who are members of the community on the receiving end of the food.

BFR Executive Director Hayden Danksy says involving community members in the distribution plan helps eliminate logistical difficulties for accessing food. “They can set it up in a way where people don’t have to go through those additional hoops,” like coordinating transportation or having to schedule their day around operating hours, Dansky explains. “That helps people access food both in a dignified way and a way that’s easier for them.”

Although Danksy and the entire Boulder Food Rescue team are extremely proud and passionate about what they do, they dream of a day where their efforts to prevent food waste and insecurity are no longer needed.

After dropping off all of the food recovered during her shift, Tyler returns the BFR bike and trailer to its starting point. She then answers a survey about her shift so BFR can keep track of how much food is going through the system.

Tyler said she averages 50-60 pounds of rescued food a week. According to their annual report, Boulder Food Rescue diverted nearly half a million pounds of food in 2021, and reached around 6000 people.

Boulder Food Rescue is also helping other cities and communities develop similar programs in their area through the Food Rescue Alliance; a nationwide collaborative effort.

BFR Executive Director Dansky says it’s these seemingly small, volunteer-powered efforts that can make a big cumulative dent in both hunger and the waste stream.

“There is so much happening in this community in the margins, in the depths, in the cracks, right, and it’s so vibrant and it’s so beautiful.”