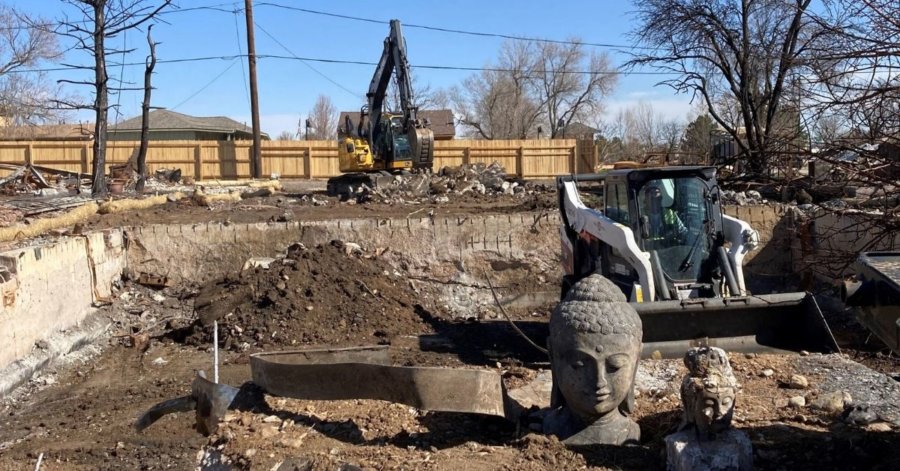 Large scale clean up is finally underway for properties completely destroyed by the Marshall Fire. As part of our 2022 Follow the Waste Stream Series, KGNU’s Stacie Johnson presents her coverage of the debris removal journey and if there is a second life for any material that gets cleared away from the Marshall Fire zone.

As heavy machinery grinds away and semi trucks with long trailers snake through the neighborhoods of the Marshall Fire zone, some may be asking how exactly are the cremated remains of a treasured home or property being cleared away, and where does it all end up?

“Any ash from the fire, any debris, any burned vegetation is being treated as if it contains asbestos,” he says. “We haven’t been putting asbestos in insulation for decades now. It’s still in other buildings, supplies like epoxies and glues and some sheet rock codings, or drywall coatings have asbestos in them. So when things burn like that in the fire, we got guidance from CDPH that, essentially, we just need to assume that all of the fire debris and ash is asbestos-containing and we’re treating it as such.”

Some property owners of destroyed structures turned to private contractors to get a jump on their rebuilding and recovery efforts.

This option seemed especially appealing as Boulder County faced delays and lawsuits challenging its choice of a contractor to handle the publicly funded and large-scale debris removal program.

Grand Lake Excavating was one of the first contractors hired directly by property owners in Superior who chose not to sign on to the county’s debris removal program.

Grand Lake Operations Manager, Brad Bauman says they are aware of the asbestos concerns and handle the debris accordingly.  “We just want the process to be as clean as possible to keep the ash in one area,” explains Bauman. “From that point, we’ll get our water truck or wet down all the ash, get that concealed into a foundation where the house is burned. So we have one controlled area where all the ash and debris is at, and then we’ll start cleaning the concrete. We’ll start cleaning the metal. If there’s metal and concrete that we can recycle. If not, it gets shipped off to the landfill with the ash and debris that is treated like hazardous material.”

The transport of hazardous material involves dumping the waste in a semi-truck trailer bed lined and draped with plastic sheeting and then wrapping the material with the same lining. When finished, the wrapped hazardous load looks like a gigantic plastic burrito.

Bauman says once the wrapped load meets his company’s standards and the requirements of the Colorado Department of Public Health and Environment, also known as the CDPHE, the truck driver can then place a screen over the load and haul it off to an approved landfill.

Each load going to a landfill must be accompanied by a manifest, which is a fancy term for a carbon copy form that compiles information on the load such as weight, the location origin of the waste, what entity generated the waste, and what trucking company is hauling the waste.

Bauman says all parties who interact with load, including the landfill, will sign the manifest: “At the very end of this process, I’ll take all of the manifests and I’ll scan them in and then submit them to the county, so they can see exactly how much came out of each individual site that we’ve worked on.”

For Grand Lake Excavating, which landfill the waste ends up in often depends on the turnaround time of hauling and the availability of manifest paperwork from a given location.

From his own audit observations of landfills, Boulder County’s Cody Lillstrom says landfills do handle asbestos loads responsibly. “They dug a hole, buried it in that hole and covered it back up so that there was no possibility of anything getting out,” he adds. “So they do take it very seriously.”

Another form of contaminated waste that will also be added to the plastic burrito is soil and organic matter from the ash footprint of a destroyed property.

Both Lillstrom and Bauman described a process of an initial scrape of three to six inches of soil from a site.

After the initial scrape, different locations at the site will be tested for any remaining heavy metals or other toxins. Pending the outcome of the soil tests, more soil could be removed.

Bauman said the lab results by his company’s own soil engineer are also compiled and examined by the county.

Another big question is if anything can get a second life from a destroyed property, and if so, how much.

Cody Lillstrom says it largely depends on the age of the home. “There aren’t as many metals as you might think from a burn site,” he notes. “Automobiles that burned out can be recycled. Propane tanks that you know, were in the fire and exploded, unfortunately. And, uh, other appliances in the house like water heaters and furnaces that are made of metal will be scrapped and recycled.”

Another type of Marshall Fire waste that can be diverted from the landfill are burned or damaged trees.

The Federal Emergency Management Agency reached out to a BioChar facility in Berthoud that heats wood feedstock multiple times the temperature of fire in a gigantic kiln.

The kiln can hold 11 cubic yards of wood waste that is heated in a non-oxygenated and vacuumed environment.

This process goes on for several hours and is called pyrolysis.

The end result is a black shiny carbon which can be used for commercial purposes like in soil amendments, cleanup material for superfund sites, and mining remediation.

The feedstock that goes in the many kilns at the Berthoud BioChar facility includes beetle-kill pine trees, trees thinned from forests, pallets, crates, and now burned or damaged trees from the Marshall fire zone.

“We embraced the non-uniform feedstock and then we keep it at temperature long enough to make sure everything is at the same quality in the same consistency,” says James Gaspard, CEO of BioChar Now. He was told to expect more than 300 truck loads of damaged vegetation from the Marshall fire.

Gaspard, who is proud of his company’s clean emissions and many patents, explains more about his company’s unique spin in producing biochar that cleans superfund sites and municipal wastewater: “At the molecular level, when we go through our process, we actually create electrical charges into the wood. So we have, we’re the only carbon, according to the USDA labs that have both positive and negative charges.”

Gaspard says most of the carbon from the bio-charred Marshall Fire trees will likely go to a customer that has developed a process for treating grey water handled by water utilities. And with that, if there is one positive that can come from the negative nasty Marshall Fire is that some of its waste in a new form will help prevent grey water from entering streams and watersheds.

Metals and concrete free of asbestos and other contaminants are also expected to get a second life.

But for all the other remaining debris, ash, and contaminated soil, it’s inevitable it will all end up in the landfill, deeply buried, and situated in an enclosed wrap of plastic material that ultimately becomes more waste.

Just how much of the waste from the Marshall Fire will have a continued journey or will make its way to an ultimate resting place is information that may take some time to tell.