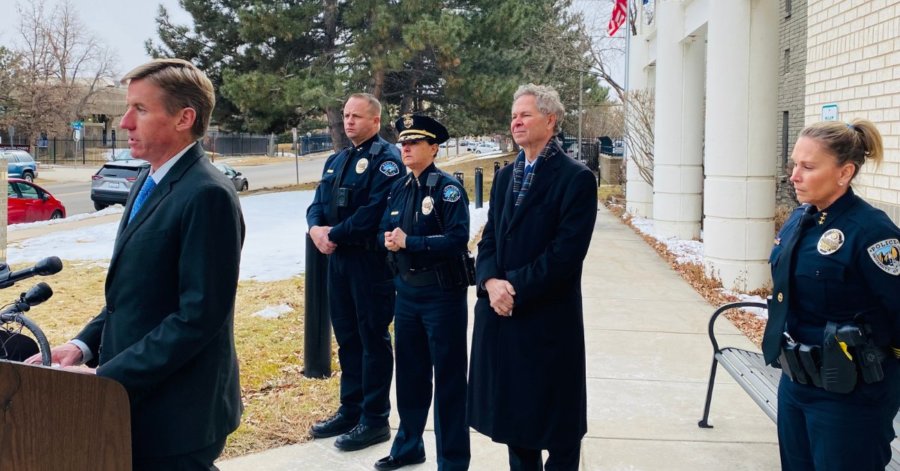 Boulder Police put out a shelter-in-place order Tuesday for the University Hill neighborhood after police learned of a suspect that forced an evacuation of the area’s elementary school.

Boulder Police Chief Maris Herold said in a press conference Tuesday afternoon they arrested the suspect after California authorities alerted them of an 800-page manifesto the suspect had sent out on Monday threatening violence in Boulder.

“We identified thousands of references to violence, stating things such as death, murder, shootings, bombs, schoolyard massacres in Boulder, and phrases like ‘burn and attack Boulder outside of the university,” Herold said.

Boulder Police activated the regional SWAT team at 7:52 AM and set up a perimeter outside of of the suspect’s Boulder residence.

According to officials, investigations found the suspect attempted to purchase a firearm in Jefferson County in November but was denied because of a California-based protection order.

Chief Herold identified the suspect as 31-year-old Matthew Christopher Harris. Harris is a former UCLA lecturer and philosophy post-doctoral fellow who left UCLA last year after widespread complaints about his behavior. According to The Los Angeles Times, in a video sent out to UCLA members, he threatened a mass shooting, and “to hunt down and kill” a UCLA professor.

“The level of violence that we saw in the manifesto was obviously so alarming. There were definitely references to Boulder in the manifesto and a university setting and a school yard setting. This is 800 pages we’re going through, but, I can tell you, it was very violent, and it was very disturbing,” Herold said.

Boulder District Attorney Michael Dougherty said quick reaction to the threat likely saved lives. “I recognize that today was a scary day for the people of Boulder. This happened very quickly and, as the chief indicated, they learned about that on Jan. 31. That’s yesterday. We have a safe and peaceful resolution today, and I want to acknowledge that what they did and how they went about it is why there were no injuries and no casualties associated with this event,” Dougherty said.

The Boulder Valley School District sent out alerts to parents of University Hill Elementary students around drop-off time Tuesday morning. Some parents left with their kids. Those whose parents had already left evacuated to a reunification point at the BVSD Education Center on Arapahoe Road.

KGNU will continue to cover this developing story as details emerge.