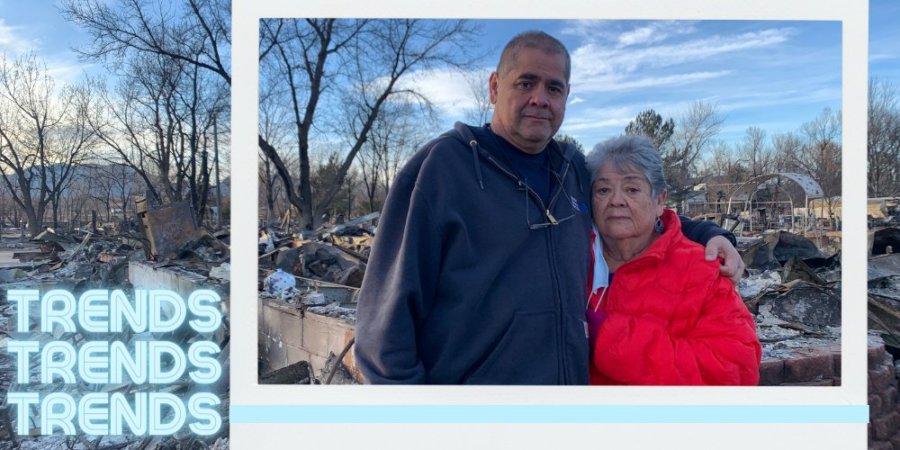 More than 900 homes were destroyed and more than 1000 more were damaged in the Marshall Fire that ravaged Boulder County on the second to last day of 2021.

While this is a tragic event for everyone who lost their homes, even a fire such as this can lay bare the inequities of our society. For those who had already lost their jobs because of the pandemic, for those who are uninsured or under-insured, or for the undocumented, who cannot even qualify for federal aid from FEMA, the consequences of the fire seem disproportionately worse.

Such is the case of the Chavez family who lost their parents’ mobile home in Old Superior, where the family had occupied the land for 80 plus years. “Well, it means a lot. So, there were five generations in that group. On this land, my great grandfather homesteaded and built three houses. Five generations of our family have been there since, and, I mean, since it’s been more than 80 years that we’ve been on this land one way or another, one family or another, we’ve always been occupying this land,” says Arthur Chavez.

Subscribe to TRENDS on iTunes to get new editions automatically. Also on Spotify and Stitcher.

The TRENDS podcast is a collaboration between the Community Foundation of Boulder County and KGNU. It dives deep into the community’s most pressing issues and explores the changes happening throughout Boulder County through the experiences of community members, especially those often rendered invisible by commercial media, to shed light on community challenges, solutions, and pathways forward for the county and the country.

The TRENDS Podcast series is made possible with support from the KGNU Listener-Members and the Community Foundation for Boulder County.

The biggest struggle the whole Chavez family is experiencing now is that they found themselves underinsured. “First of all, we found out that everybody is underinsured: said Chavez. “So, even though we fill the home’s worth a lot more than the insurance is going to pay out, it’s because we weren’t knowledgeable enough to get with our insurance agent every two years and reevaluate our land and our property and what we’ve improved. So we basically lose all that. We didn’t know that we needed to do that. So I would advise everybody, you know, from a house to a trailer, always check your insurance every couple of years.”

Elsie Chavez, Arthur’s mom, was the holder of the family photos — now all gone. “My mom, she was the holder of all that memorabilia. Albums, family pictures from my dad’s side and her side from our grandkids, her nieces or nephews. I mean, every picture you possibly could imagine was in that house and is no longer there. And that’s what breaks my heart is the history that we won’t be able to show our grandkids — those of our great grandparents,.” says Chavez.

Just like the Chavez family, there are others in the same situation of being underinsured, says Abi Ocampo, who works as a lead bilingual advocate at Sister Carmen. “I did encounter folks that were under-insured. So they had to apply for FEMA. And again, that’s great. But if you are someone who has insurance and is undocumented–you’re out. You’re again left in that limbo where you just don’t know where to turn. So we were asking FEMA, if they have any other resources and it looks like Southern Baptist is there and they’re an organization that helps people in case they’re under-insured or not insured,“ says Abi Ocampo.

Ocampo has also heard a lot of victims saying that they have been paying their insurance thinking that they were completely covered and now that they do not have a home the insurance is offering to pay only 60 percent of what they lost and it is going to take at least two years to rebuild.

“The people who can, will build new homes and continue to be settled in Superior and Louisville and our communities who are most vulnerable will be pushed out of East Boulder County. We are going to loose a lot of our Latino population or our working class because they are just not able to build back,” says Ocampo.

Ocampo explains that there are various barriers that prevent Latino communities from accessing the support they need and deserve.

Back at the Old Superior neighborhood, Elsie Chavez shares memories of the day of the devastating Marshall fire and reflects on its hard lessons.

“As I opened the door, the smoke and debris ashes just came through. I had double doors on this side. My daughter Loreta locked the door and said, “I locked the door mom so nobody can come in.” We really thought we were going to come back home. We’re going to build this thing even stronger. We’re going to get closer to our neighbors. This was some kind of a warning that we need to love each other. something good should come from this and for everybody around us,” says Elsie Chavez.

Our panelists are Berenice Garcia Téllez Board Chair of the Latino Chamber of Commerce Boulder County y Jaime Moreno Nunez treasurer LCC and business owner Frontera Group and they talk about what it means to be underinsured, a topic that has raised lately after the aftermath of a devastating wildfire the Marshall Fire.

Our panelists are Berenice Garcia Téllez Board Chair of the Latino Chamber of Commerce Boulder County y Jaime Moreno Nunez treasurer LCC and business owner Frontera Group and they talk about what it means to be underinsured, a topic that has raised lately after the aftermath of a devastating wildfire the Marshall Fire.