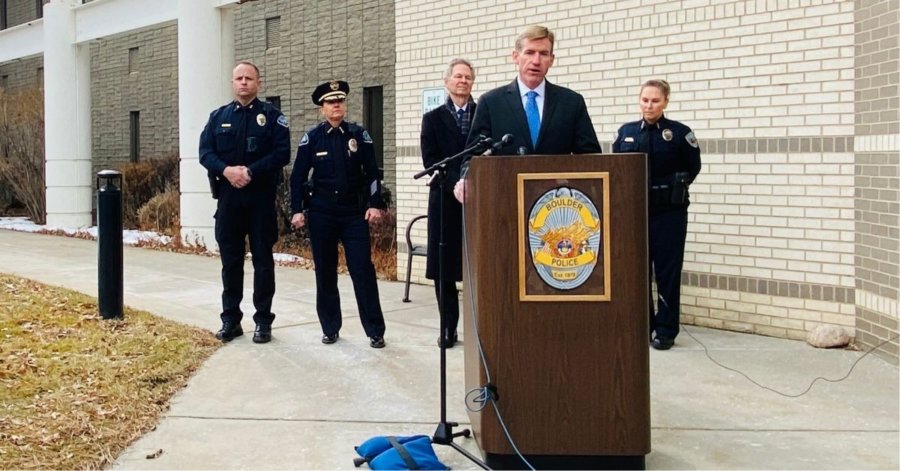 Last Tuesday, a security situation led to the evacuation of University Hill Elementary Elementary school and shelter-in-place orders for much of the surrounding neighborhood near CU Boulder campus. The evacuation came in response to threats allegedly sent by a former university lecturer suspected of writing an 800 page manifesto filled with violent references. After the school evacuation, reverse 911 calls were made to many neighborhood residents ordering them to shelter in place. By the end of the morning, Boulder Police had taken the suspect into custody.

Boulder County District Attorney Michael Dougherty was at KGNU’s Boulder studio Monday and sat down with News Director Shannon Young to answer questions about the case.

District Attorney Michael Dougherty: Well, it was a very scary situation for a lot of our community members, and I’m just glad it was resolved as quickly and peacefully as it was. What I can tell you is, and it really does highlight the great work done by law enforcement here, the day before Monday the individual in question is believed or alleged to have sent an email with an 803 page manifesto to individuals at UCLA. He had been in California previously. He had connections to California,  he had a  history in California and he sent that email with the manifesto from Boulder county.

So, when he sent it to UCLA and it was reported to the UCLA police department on Monday, UCLA pinged his phone, tracked his phone to Boulder, and notified the Boulder police department. That notification came in at  6:30 on Monday evening. And I would just point out how many of us are going to look through an 803 page manifesto that we receive at 6:30pm? Well, the Boulder PD did. And they went through that manifesto as quickly as they could; and it contained very serious and concerning threats about violence, murder, schoolyard, massacre, shootings on campus and so on. And those are all directly from the manifesto that was sent.

So, the Boulder Police Department worked overnight to locate the individual, make sure he was within his apartment, make sure he was kept under surveillance that entire time. And the next morning, when the sun came up, started to employ SWAT forces to make sure that they could take him into custody safely. They worked very closely from the beginning with the District Attorney’s office, the Federal Bureau of Investigation, also the US Attorney’s office. And the reason the US Attorney’s office was and is involved is because the threats were made over state lines and the victims are located in California.

News Director Shannon Young: My understanding is also that there were some threats against Boulder or referencing acts of violence outside of the campus. Why not also add state charges on to that?

The state charges were filed that day, but this case is better prosecuted at the federal level, by the US attorney’s office, given the charges that could be brought by federal prosecutors when it’s an interstate threat and the victims are located in California. So we have state charges pending. We worked on a search warrant with the Boulder Police Department, but from the very beginning, I reached out to my counterpart at the US attorney’s office, because I recognized that since the threats were made across state lines, that the US attorney’s office could and should be involved. And I fully support them filing charges in federal court. The charges that they filed in federal court for interstate threat carries with it a 20 year sentence in federal prison.

SY: Prior to transferring the case to a federal jurisdiction, there was a search warrant issued and executed. What was found on the premises?

MD: So, law enforcement is still going through the things that are recovered from the apartment, and a lot of it’s going to be digital evidence that remains to be analyzed.

MD: It would likely take place in the state of Colorado, but that’s a question better answered by the US attorney.

SY: Okay. Anything else that you’d like to add, or that you can share about this particular case?

And I think that’s exactly what we need to see when it comes to reducing gun violence in this country. Stronger background checks and the ability for gun store owners and for law enforcement to  better identify who’s ineligible to purchase and possess a firearm. So, he was denied the purchase of a firearm in November, and that was something that was on Boulder PDs radar that Monday night into Tuesday morning; that he had attempted to purchase a firearm. And it’s part of the reason why a concern was ratcheted up as quickly as it was the next morning, leading to the evacuation of the school for example.

SY: What was the cause behind the protection order?

MD: He had a history over the past year of threats made to other people at UCLA. He was not connected to Boulder at all, he was not living in Boulder at the time. He was a philosophy professor at the University of California, and he was actually dismissed from the school as a result.

SY: Are there any other firearm measures that have been implemented since the mass shooting at King Soopers that may have contributed to the denial of this attempt to purchase a firearm?

MD: That’s a good question. So, no, this was in place before the King Soopers attack took place. And when I say this was in place what I’m referring to is when someone tries to purchase a firearm every gun store owner is supposed to put that person through a background check that’s run through the Colorado Bureau of Investigation -it just takes a few minutes, but is obviously critically important. He failed the background check, given that protection order from the state of California, he was denied the ability to purchase the firearm.

SY: Michael Dougherty, Boulder County District Attorney, thank you so much for stepping into the Blue Studio with me today.

MD: And I will say, just as I do every time I talk to members of the media, that the individual charged is innocent, unless, and until proven guilty, and the charges are merely an allegation. I’m required to share that anytime I talk about an open case.