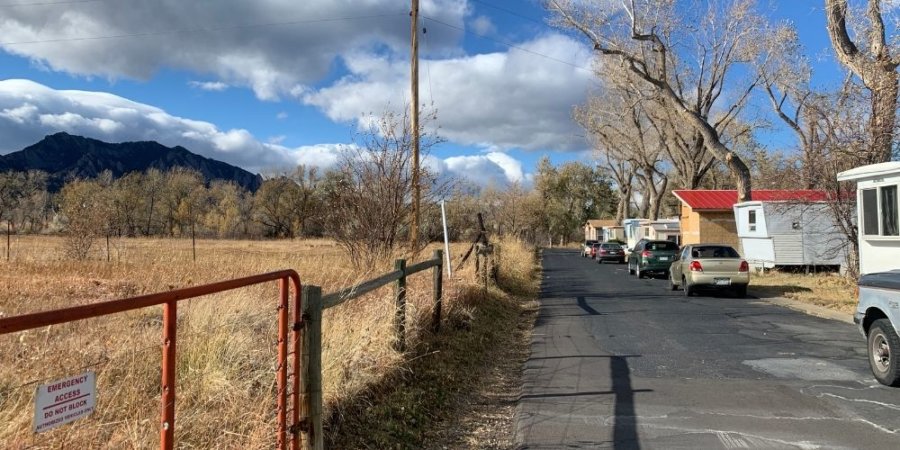 Residents of the Sans Souci mobile home park just south of the City of Boulder recently closed a deal to collectively purchase the land upon which their homes sit, thereby becoming one of the few resident-owned mobile home parks in Colorado. The purchase was made possible due to recent changes in state law.

Listen to the story:

Those changes include Mobile Home Park Act Updates that provided more protections for residents and Opportunity to Purchase legislation, which now provides mobile home residents with an opportunity to purchase the land upon which their homes sit.

Sans Souci resident Michael Pierce, President of the cooperative that purchased the park, says prior organizing efforts around the lack of potable water allowed residents to react quickly when they learned their landlord was considering selling the land.

Pierce says a national housing organization called ROC USA helped them navigate the process of making a counteroffer. Revisions to the Mobile Home Act put residents in a favorable position to make a counteroffer. But they had to act quickly. The law gave them 90 days.

“We received notice that our landlords had intended to accept the purchase offer. Our 90 day period was triggered. And so we have the ability to get everybody together, get more than 50% of the residents on board. We went through due diligence and finally finalized and closed the sale.” says Pierce.

Residents of San Souci purchased the land as a cooperative and had to structure their organization under a set of bylaws. This may provide a model of the other manufactured home owners seeing greater autonomy with their communities.

Renée Hummel is on the steering committee of the Colorado Coalition of Manufactured Home Owners and she says mobile homes are known as the major subsidized affordable housing available in this country as well as in Colorado. She adds that mobile homes in the state are seen as a lucrative investment as mom and pop parks get older and go up for sale. According to Hummel, there are lots of buyers looking to cash in on mobile home acquisition.

Hummels says Mobile Home University has openly said owners of mobile home parks can raise rent because residents are “captive tenants” and cannot do much to oppose the cost increases. In Boulder, most of the mobile home parks are corporate-owned with the notable exception of Mapleton.

Hummel says residents of manufactured homes parks across the state are coming together to organize for improved conditions, but authorities need to do their part to ensure new laws are enforced.

“We can organize all we want and get laws on the books to help us… but if there is no teeth, it doesn’t do a lot of good,” says Hummel

The cost of the land where Sans Souci is located was not cheap. Residents will not see a reduction in their rent, but rather the purchase of the land is seen as protection against future unexpected rent hikes. Considering how the rental markets are now in Boulder, it’s a small – but important – victory for some of the area’s most vulnerable homeowners.