Moms Demand Action – the East Boulder Chapter gathered with the public over the weekend to build momentum around the passage of gun safety measures like universal background checks, a ban on high-capacity weapons and legislation to disarms domestic abusers. Gun law reform advocates and their families came together in Cottonwood Park in Louisville to hear from speakers and march together.

KGNU’s Rossana Longo brings us this excerpt of a speech by Maisha Fields, a Denver gun sense activist with the Brady Campaign to Prevent Gun Violence.

Maisha Fields spoke to the large multigenerational crowd about what needs to be done to combat gun violence and how the public can get involved before leading the group on a 2 mile march to the Louisville Rec Center. 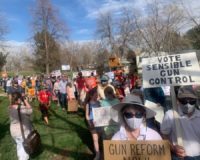 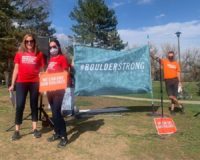 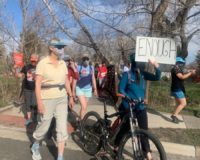