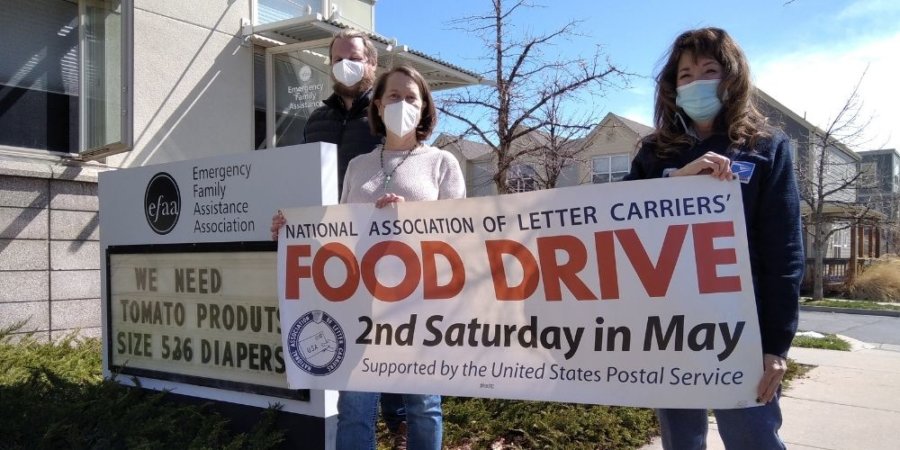 Every corner of the Emergency Family Assistance Association (EFAA) is bustling even before its food pantry opens to the public. A truck filled with donated food backs up to a loading dock while volunteers stock shelves ahead the afternoon rush.

Listen to the story:

“We’re open Monday through Friday and we see about 40 or 50 people a day,” says Walter O’Toole is the food bank manager at EFAA. Since the start of the pandemic, a broader range of individuals are now seeking out food assistance. “We recently completed a food bank survey and about 25 percent of the people who are coming in now, their first visit to the food bank has been in six months or less.”

Stigma can often be an issue when people come to a food bank for the first time and EFAA has implemented a couple of measures to make the ask easier for those in need.

“Currently, we’re not asking for any documentation during this time,” says food bank assistance Shari Mukundan. “That might change…but right now, anybody who needs food can come.”

EFAA’s Communications Director Ashley Rumble adds that another recently implemented program is a participant volunteer policy, “so it really becomes less of a hand out and more of a community model of getting food to people who need it.”

The inside of the food pantry resembles a small grocery store. Before the pandemic, clients were able to grab a shopping cart and pick out what they wanted. But as a precautionary measure due to the enclosed space, volunteers now fill orders based on selections clients make on a menu of what’s available.

Food bank manager O’Toole says the food comes from various sources. Eighty-three percent is donated. The US Department of Agriculture provides around ten percent of the inventory. Another part comes from “different community organizations, schools, faith groups, the postal service, to host food drives in the community to get the things that we need.”

One of those food drives is underway now, organized by the National Association of Letter Carriers.

Diane Santoyo is a letter carrier in Boulder and the NALC’s local food drive coordinator. For 27 years the letter carriers would collect bags of non-perishable food from doorsteps on their mail routes, but the pandemic forced the drive into an online space this year and the last.

“In its place, we put together a donor drive which is online that people across America have access to and can make a monetary donation,” says Santoyo. “All they need to do is go to NALC.org/food choose their state and a list of food pantries will come up nearest to them. And that will direct them to the website of their food pantry and then they will be able to make their donation in cash.”

The letter carriers time their drives for the Spring because that’s when a lull tends to occur and stocks of non-perishable items at food banks dwindle after the holiday high season donations.

Santoyo says letter carriers are uniquely positioned not only for donation pick up during normal years, but also for outreach efforts in times of need: “The reason why this whole food drive has happened by the letter carriers is that we do go into our communities six days a week. There’s thousands of us who come face to face with the faces of our communities.”