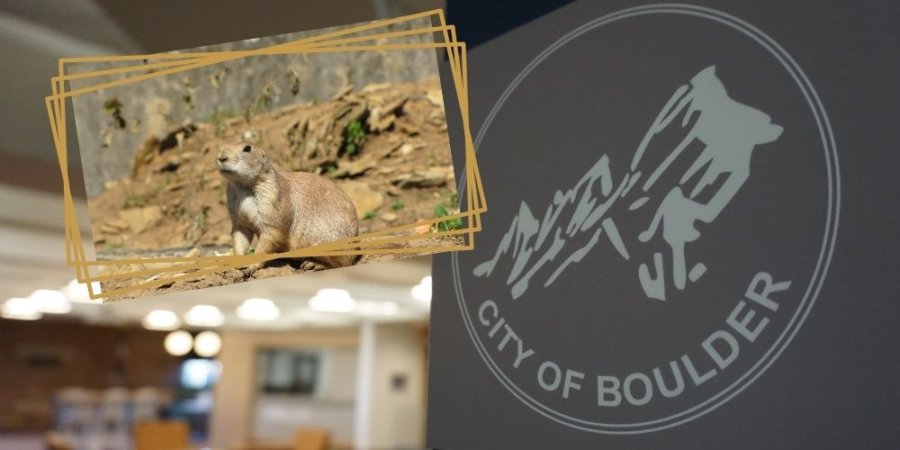 The postcard included a group photo of the city council with the caption “The Boulder C.C. “Nazis” – Deciding the Fate of the Native Prairie Dogs.” Mayor Sam Weaver said the anonymous postcard sent to council deserved a response.

“The postcard and public commentary on the subject caused pain and harm to our community when they learned about it,” said Weaver.

The community might not have known about the postcard, but prior to the start of last week’s meeting streaming to the public, Council Member Mirabai Nagle, a strong animal rights supporter and proponent for the use of nonlethal forms of prairie dog management, said she understood the comparison between Council and the Nazis. Nagle said, “What makes us different? We’re gassing 30,000 prairie dogs.”

In covering the meeting, a local reporter tweeted the comment, which led the mountain states region of the Anti-Defamation League and the Rose Community Foundation to release statements condemning the comparison.

At last night’s meeting, Nagle, who is Jewish, apologized.

“I had no intention to minimize the immense human suffering that resulted from the murders perpetrated during the Holocaust,” said Nagle. “I regret my statements caused pain to those listening and to those who read incomplete accounts of them and I am sorry. I believe the Holocaust and events surrounding it, are some of the most abhorrent events of all time.”

“We explicitly reject the false equivalency that compares the Holocaust, the largest recorded genocide in modern human history, to other historical or current events,” said Friend. “ Importantly, the reflexive use of such harmful comparisons degrades the significance and power of never forgetting. We have a collective duty to remember.”

At the end of the meeting, Nagle shared more of her views on the issue of prairie dogs and the environment.

“Animals and the environment are something I’ve stood for since I was a child,” said Nagle. “This passion has only grown. Helping preserve our natural world is one of the main reasons I ran for council.”

Nagle also took issue with the media reporting her comments.

“Tweeting this incomplete conversation was a reckless use of the media to spread misinformation and hatred and decrease the humanity already lacking in our world today,” said Nagle.

But blaming the media was a bridge too far for councilman Aaron Brockett.

“I did see the relevant tweets and they were just your quotes,” said Brockett. “In this time of the media being called ‘fake news’ and the ‘enemy of the people,’ those were quotes tweeted out and not a misinformation campaign.”

Incidentally, the postcard was postmarked in September 2020, about the time Council decided in an eight-to-one vote, with Nagle dissenting, to use lethal control on prairie dogs on city-owned open space designated for agriculture use.