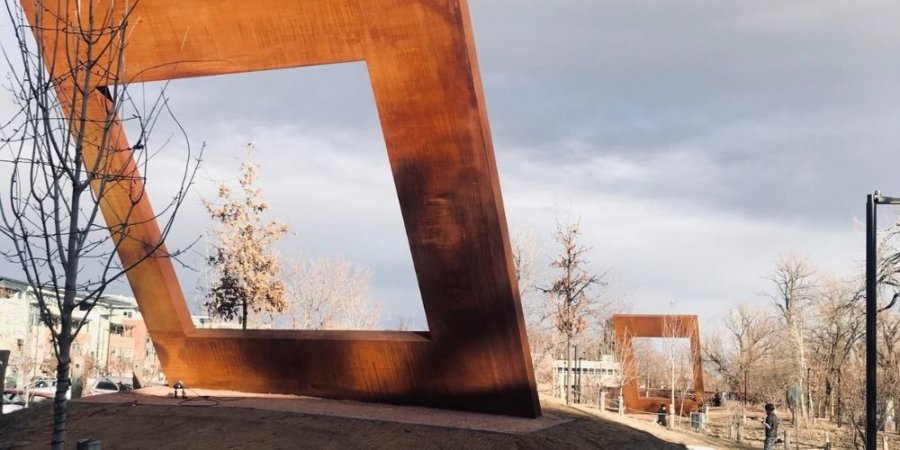 If the pandemic has kept you from traveling to central Boulder lately, you probably missed the arrival of 30-thousand pounds of steel to the civic park last year. KGNU’s Roz Brown says when spring arrives, finishing touches will be allowed on a large-scale public art sculpture oriented toward the Flatirons called “55 Degrees.”

“The angle of the sculptures is 55 degrees, which is the average angle of all the Flatirons,” said Adam Kuby, the artist behind 55 Degrees, which is actually three sculptures weighing 10-thousand pounds each hoisted into place by a crane at the civic area in front of the Boulder Public Library on Canyon Boulevard.

“I think the pieces can be experienced on multiple levels,” said Kuby. “They can be experienced as dynamic, dramatic abstract sculptures, but I think most people who see them get that there’s some relationship to the Flatirons – that’s what they’re about.”

Mandy Vink is Boulder’s administrator for the Public Art Program and says 55 Degrees goes all the way back to 2017.”

“Because it was a large-scale construction project it took time from the selection process to getting it into the ground,” said Vink.

“There were five artists who had proposals out of 280 qualified applicants,” said Vink. “Adam came in and wanted to acknowledge the park in its entirety rather than isolate the project to one location.”

According to Vink, the sculptures function as interactive windows, framing the sky, the park, and the Flatirons beyond.

“The Flatirons are a symbol that’s so important to anyone who’s everyone who has ever lived here,” said Vink.

But Kuby, a resident of Oregon, says he initially worried that the Flatirons were overworked, or too cliché.

“I was taken with the Flatirons and was aware of how big a presence they are for Boulder and also how ubiquitous they are on coffee shops and bank signs, so I was a little hesitant because I thought maybe people were tired of them,” said Kuby. “But I wanted to see if there was a way I could transmit their angle and geometry into downtown Boulder and create a deeper dialogue between the city and mountains.”

After a survey of the site last September, Vink says there was only one area that made sense for the massive sculptures.

“The three sculptures were dictated on their placement because those are the highest elevations in the park and they are out of the 100-year flood plain and high-hazard zone.”