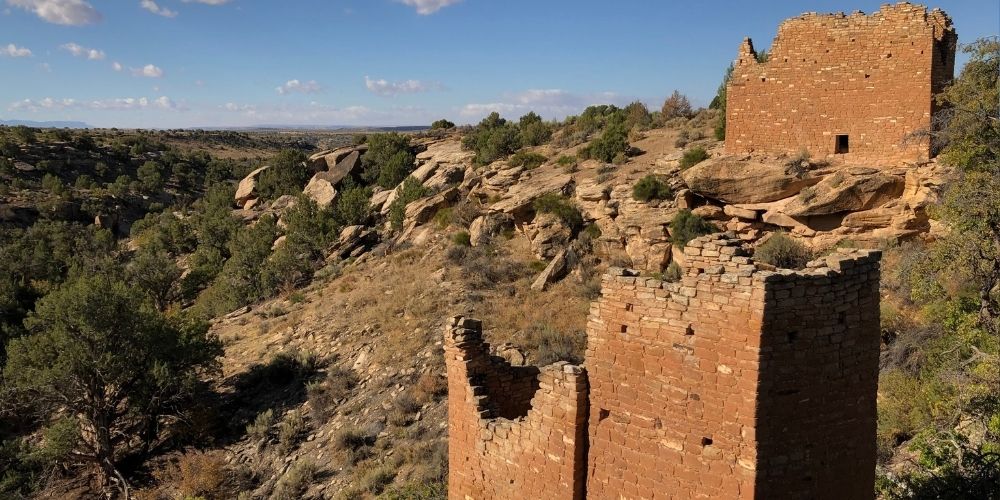 Photographers, migrating animals, and cultural histories all share a reliance and admiration for one thing: clear, dark, starry skies. But the preservation of dark skies is threatened by development, including evergrowing cities and the infrastructure needed for oil and gas production. As KSJD’s Daniel Rayzel reports, southeast Utah is just one of the places where advocates say mitigation for light pollution is often ignored.

By day, visitors to Hovenweep National National Monument can marvel at structures still standing hundreds of years after Ancestral Pueblo people built them. But by night it can be mind-blowing says Erika Pollard, associate director for the southwest region of the National Parks Conservation Association.

Pollard doesn’t just love dark skies, she wants to see them protected. Dark skies have many benefits, like for migrating wildlife, and their impairment also means a cultural loss for many people, including Native American tribes who continue to fight for dark sky preservation.

“Coming to these places in Utah, including Hovenweep, they’re some of the last remaining truly dark places in the lower forty-eight,” she says.

At the NPCA, Pollard works as a sort of watchdog for anything that could impact national park land and the areas around them. And those areas often include oil and gas drill sites. Landon Newell, a staff attorney with the Southern Utah Wilderness Alliance, has kept an eye on these sites, too. “They would light up a drill rig like a Christmas tree,” says Newell.

That’s because a lot of development can go into a lease sold to an oil and gas company. Roads, drill rigs, and pipelines can all be part of the process. Plus, “flaring” to burn off excess gas as a safety measure, or if a company doesn’t have the infrastructure to capture and later sell it.

Fixtures can be installed to direct light downwards, rather than flooding it to the sky. As for the flames, drillers could pipe that excess gas away as another product. But, companies don’t always take these options. Newell points to one example in Big Flat, an area surrounding the road that leads to Canyonlands National Park. There, flaring continued even after the Bureau of Land Management allowed for gathering lines to pipe the gas away.

“People travel from around the world to see the red rock canyons and the Colorado River and the Green River. They don’t travel to see industrialization in these areas,” says Newell.

Whether or not companies have to follow light pollution mitigation measures comes down to the rules of a lease. Newell says leasing from the BLM generally breaks down into three steps: First, the agency prepares a resource management plan and decides where and when operations can occur.

In the second step, the agency offers areas for leasing to energy companies. And in the third step, the lease is issued and the company can operate or develop within the stipulations of the management plan. But even early on, environmental impact statements don’t always address light pollution from these developments. “In such a dark and remote area, that’s visible for miles and miles around. But it’s something that’s not being considered by the agency,” says Newell.

The best option, Newell says, is instead of mitigating light pollution as it’s taking place, changes need to happen in the first step. Like restricting surface occupancy, which would prohibit development in areas known for dark skies. Pollard calls this a “smart from the start” approach.

“There really are some places that are too sensitive and special to move forward with oil and gas development.”

Under the Trump administration, the BLM has been encouraged to ramp up leasing and development. That prompted a 2019 lawsuit from the Southern Utah Wilderness Alliance and another organization, that ultimately suspended leases sold around Hovenweep and elsewhere in southeast Utah. Prior to that sale, the National Park Service’s Southeast Utah Group wrote a letter to the BLM saying they, quote, “feel our concerns were not fully evaluated.”

Utah’s Community Development Office even published a study guiding localities in preserving dark skies for recreational and economic benefits, and warning of the harm otherwise.

“I’m hopeful that, particularly, in that landscape in southeastern Utah around Hovenweep that we’re going to be able to figure out some good long-term solutions for protecting it,” says Pollard.

As the Biden administration prepares to take office, Pollard and other advocates hope to see that smart-from-the-start approach become standard, and echo the Obama administration’s Moab Master Leasing Plan, which put restrictions on leasing around national parks there.