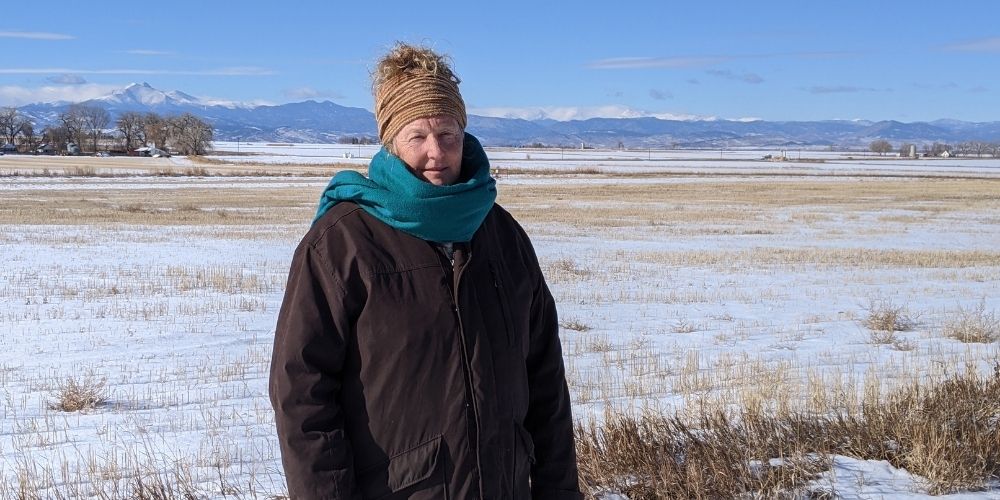 New rules around oil and gas development go into effect in January. This comes after months of debate at the Colorado Oil and Gas Conservation Commission, the state’s regulatory agency, which was tasked with overhauling rules after legislation was passed in 2019. One central part of SB 181 was giving local communities more authority to regulate the industry, but as we hear now, two Front Range counties have radically different ideas of what local control means.

Featured image: Amanda Harper at her home on the border of Weld and Boulder Counties.

Where Weld and Boulder Counties meet, it’s hard to see where one jurisdiction ends and another begins. It’s where Amanda Harper and her family live.

Harper and her family moved here because of the landscape, the chance to have a small farm, and the opportunity to live a rural, peaceful life.

“That’s how we wanted to raise our child in an agrarian situation with open spaces and clean air.”

But that peaceful rural life was suddenly interrupted 6 years ago when Harper learned that her idyllic farmhouse would soon be in the midst of an oil and gas development.

“When I found out completely haphazardly that there was going to be a 12 well site placed 1,000 feet west of me, and then another one three quarters of a mile north, I spent four and a half years trying to fight that through many, many means….going to the Weld County government, going to the Boulder County government.”

Harper lives right on the border of Boulder and Weld Counties, but her home is just to the east of county line road, putting her in Weld County. She soon found out that the different counties have very different attitudes to drilling.

“Boulder County at least is trying to do the right thing, they really are, from a climate perspective, from a neighbor perspective, they just have a bigger picture, Boulder County does. Weld County has a very narrow picture of oil and gas, as much as we can, now.”

Weld is the number one producer of oil and gas in the State. 87% of all crude oil production and 43% of all natural gas production in Colorado comes from Weld County and it welcomes the industry.

Boulder County on the other hand has tried to stop drilling. Voters in Longmont voted to ban fracking several years ago, something that put them at odds with the state and its previous rules about local control.

The differences between Weld and Boulder counties have become even more apparent in the wake of Senate Bill 181, passed by lawmakers in 2019. Instead of fostering the industry, the mission of the Colorado Oil and Gas Conservation Commission is now to regulate it and to prioritize public health, safety and the environment.

It also affords local communities more control, something Boulder has tried to enforce in recent years. But that issue of local control is being interpreted in a very different way by Boulder’s neighbor to the east.

Speaking on the steps of the capitol in Denver in June 2019, Weld Commissioner Barbara Kirkmeyer said Weld County would use local control to allow them to be even more welcoming of the oil and gas industry.
“We are going to force local control back down their throats, the same way they forced (SB) 181 down our throats, and that would be the Weld County way.”

Just weeks later the Weld County Commissioners approved the creation of the county’s Oil and Gas Energy Department (OGED) with a stated goal of serving residents and the energy industry.

That is in sharp contrast with Boulder County’s attitude to drilling. Dale Case who heads up Boulder County’s Planning and Permitting Department says the county’s approach is to be protective of the environment and the residents in the county.

“The county has been pursuing regulations that really do try to achieve that level of protection,” says Case.
In December Boulder County Commissioners voted to increase setbacks between people and wells to 2,500 feet in most cases. That’s even more than the state’s new setback standard of 2,000 feet. This year Weld County approved its own setback rules…500 feet between wells and homes.

Dale Case says having a neighbor like Weld County with such a different approach to regulation, can create problems.
“Oil and gas development, has impacts beyond county borders, it doesn’t stick within a line like some other types of development, air pollution, water pollution, those are things that don’t respect boundaries, so it does create some issues with two different regulatory structures looking at it in different manners.”

The fight is still not over. Remember Barbara Kirkmeyer the Weld County Commissioner we heard from earlier? She herself is headed to the legislature. She was elected to serve in the state Senate starting in 2021 where she says she’ll work to repeal legislation like SB 181.