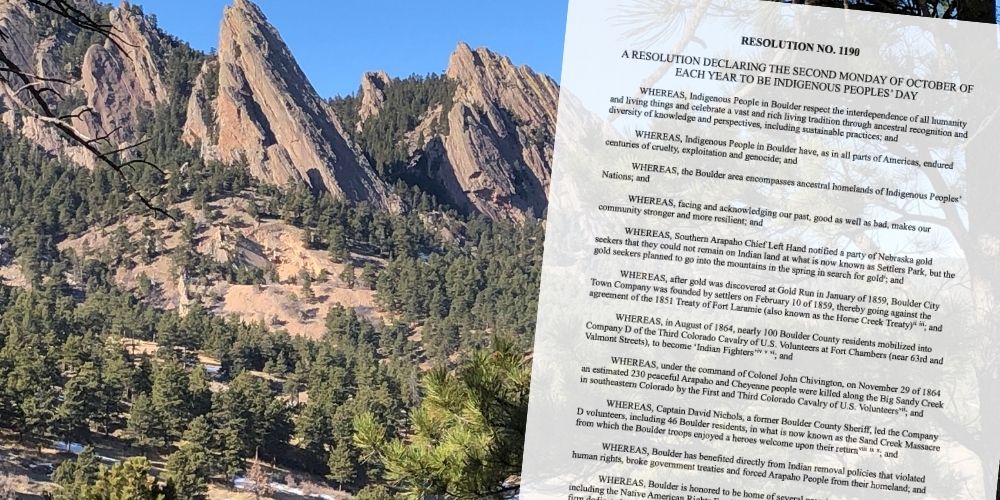 Indigenous Peoples Day, a call to honesty and action

A commentary by Paula Palmer

It moves toward action, directing “the City Manager to work with City departments, Native Americans and historians to correct omissions of the Native American presence in public places, resources and cultural programming.”

We have a unique opportunity to take this action now, at a time when people throughout the country are rethinking how we should memorialize our history.

Whose voices, stories, and images have been erased or denigrated? Whose stories have been sanitized and mythologized?

In our public spaces, how can we reckon with the terrible injustices and legacies of slavery, genocide, colonization, and racism? How can we face our history together with a common commitment to truth, respect, and justice?

Here’s our opportunity: In 2018, the city purchased a 110-acre property on 63rd Street between Valmont and Jay roads. This land lies just north of Valmont Butte, a sacred site to many indigenous nations. For more than 14,000 years, their ancestors hunted, traded, held ceremonies, lived and died on this land.

Euro-American settlers came to Boulder Valley as miners in 1858. At that time, Chief Nawath (Left Hand)’s band of Arapaho people were living here in their territory, recognized in the Fort Laramie treaty of 1851. The miners violated this treaty and forced the Arapaho out of the Boulder Valley. Settlers built sod stockades anticipating resistance from native people. One such stockade was Fort Chambers, built on the 63rd Street land that the city purchased two years ago.

What happened at Fort Chambers? In 1864, the territorial governor, John Evans, recruited settlers as “Indian fighters” specifically to kill native people and further white settlement. Boulder area recruits mustered into service, drilled, and trained at Fort Chambers. Col. John Chivington led Boulder’s regiment to Sand Creek, where they carried out the grisly massacre of more than 230 Cheyenne and Arapaho people — mostly women, children, and elders — who were peacefully encamped under protection of the Union flag. Chief Nawath died of his injuries there. A congressional investigation determined it to be a military massacre.

The Cheyenne and Arapaho people who survived the Sand Creek Massacre were forced out of Colorado to reservations in Oklahoma, Wyoming, and Montana, where most of their tribal members live today.

This is how Boulder “has benefited directly from Indian removal policies that violated human rights, broke government treaties and forced Arapaho people from their homeland,” in the words of the city resolution. So how can the city now “correct omissions of the Native American presence in public places, resources and cultural programming”?

One immediate way is by protecting and developing the Fort Chambers site as a place to teach the history and presence of indigenous peoples in the Boulder Valley, to honor the 1851 Treaty, and to welcome the Arapaho people back to their homeland.

Southern and Northern Arapaho leaders have offered to guide and direct this process to ensure its authenticity, integrity, and adherence to tribal protocols.

They have shared their visions of spaces for remembrance, reflection, and education, as well as spaces for camping and lodging. The Fort Chambers site, including the large beautiful Queen Anne-style house, open land, and cottonwood groves, provides ample and appropriate spaces for all these possibilities. It remains for the city’s Open Space and Mountain Parks department to commit to dedicating the Fort Chambers site for this unique purpose.

This is an urgent and timely call for honesty and action. A local organization, Right Relationship Boulder, is urging the city to protect and develop the Fort Chambers site under the direction and guidance of the Arapaho and Cheyenne people. Together, let’s transform a site of racist violence into a place of remembrance, learning, dialogue, reparations, and right relationship.