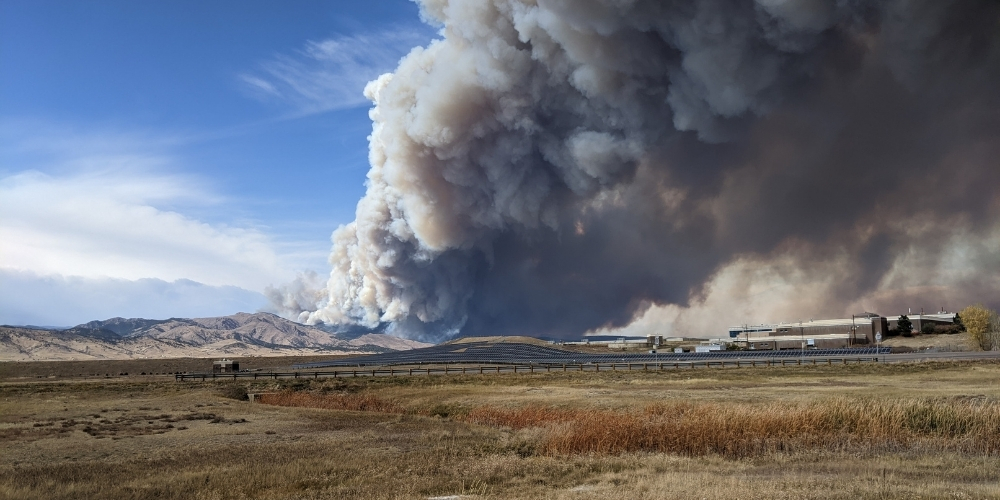 Two fires are currently burning in Boulder County — the Cal-Wood fire north of Boulder and the Lefthand Canyon fire to the northwest of city limits.

**For updates on the East Troublesome Fire check KGNU’s weekday headlines in English and Spanish.**

Officials said Tuesday they have pulled some resources off the Cal-Wood Fire in Boulder County. The fire has experienced “minimal growth” with up to 14 inches of snow blanketing the area in places.

The Daily Camera reports that crews are on patrol status, and as of yesterday they were going to monitor the fire from a distance.

On Tuesday afternoon, the Cal-Wood fire remained at 76% containment and 10,105 acres. Some of the resources fighting the wildfires will be moved to other locations in the state.

The cause of the Cal-Wood Fire, the largest in Boulder County’s history, remains under investigation, as is that of the Lefthand Canyon Fire which is fully contained.

Up to eleven inches of snow fell over the Cal-Wood fire Sunday according to the official Facebook page for it and the Lefthand Canyon Fire.

Freezing drizzle and treacherous roads made travel extremely dangerous. Firefighters took the day to fix equipment and will be ready to go if conditions allow.

The Lefthand canyon fire in Boulder County is now 100% contained. Late Thursday local officials announced that the fire was still at 460 acres but was under complete containment.

The Cal-Wood fire is at 10,073 acres and is 55% contained. Several evacuation orders were lifted yesterday and US Highway 36 was reopened between Lyons and Boulder. Some road closures remain in effect, including the closure of Hwy 7 between Lyons and Raymond and access through the peak to peak highway.

The Boulder Office of Emergency Management announced this morning that residents withing the Cal-Wood and Lefthand Canyon fire evacuation areas may return and stay home. However, officials are asking those residents to “remain on alert and be ready to evacuate again should fire conditions change.”

Residents are asked to check-in with law enforcement they will encounter enforcing “soft road closures” in their neighborhoods and should be prepared to show ID proving residency. Those living in areas with severe fire damage may be asked to leave their homes by 6 p.m. A limit of “fewer than a dozen” residents in a single home is in effect in the fire areas so the roads are not congested and kept open for firefighters.

The Cal-Wood fire is now 10,073 acres and 24% contained. Crews were active around the fire on Wednesday. Firefighters had aerial support and firelines held even as winds increased across the area.

The Lefthand Canyon Fire, it is now 460 acres and 43% contained. The majority of that containment is on the southern side of the fire area.

Access to evacuated areas has not yet been granted. People are being asked to avoid the area until further notice.

Earlier today an evacuation order was issued for Lyons Park Estates ­due to fire behavior observed on the Cal-WoodFire and the forecasted wind event for overnight hours.

Fire officials said the order is being made out of an abundance of caution. The evacuation orders went into effect at 2 pm. to allow residents time to safely evacuate and prevent any evacuations being needed in the middle of the night.

The evacuation order is not for the town of Lyons but for Lyons Park estates, a subdivision south of Lyons.

Fire officials say the CalWood Fire has not grown and is not advancing to the north or northeast. The northeast corner of the fire remains inside the established perimeter and fire behavior remains moderate.

Tuesday night in a virtual community update (video below) the County Sheriff’s office said that they had made progress on the fires.

Sheriff Joe Pelle said no additional structures have been destroyed or damaged beyond the 25 announced Sunday night.

Combined, both fires are burning more than 10,000 acres in Boulder County.

Officials said at the virtual community meeting that the weather is forecast to get worse before it gets better. Derek Williams, the Incident Meteorologist, said today will bring critical weather conditions from noon until 8 a.m. tomorrow. He said a strong cold front will then move over the fire area dropping temperatures and rising relative humidity.

Many residents asked about the status of evacuations in Lyons and Jamestown. Sheriff Pelle said that, if officials decide to evacuate Lyons, residents would be notified via cell phone, a reverse 911 and from deputies canvassing the town.

According to Pelle, the status of Jamestown, which is under an evacuation warning, was made based on the topography of the town and the ability to evacuate through two paths.

All National Forest lands in the Front Range from Jefferson County to the Wyoming border were closed to visitors last night at midnight due to the fires. According to the US Forest Service, the closure will be re-evaluated daily.

A representative of the Forest Service said that people, who live in a national forest and are not under an evacuation order, will not be evicted and access to their property will be managed.

This afternoon, the Cal-Wood Fire has been more active on the south side, being fueled by this morning’s stronger west winds. Firefighters are actively building containment lines as the fire backs southward down the slope. There has also been some activity on the northeast side of the fire, mostly from interior fuels burning. Crews continue working in all divisions constructing containment line and patrolling established lines. The contained portion of the fire near Highway 36 is holding.

The Cal-Wood fire is estimated to be 9372 acres.

The US Forest Service is temporarily closing all National Forest land in Clear Creek, Jefferson, Gilpin, Boulder, and Larimer counties, effective midnight tonight. The decision will be re-evaluated daily.

The Boulder Office of Emergency Management has created an interactive map for residents impacted by both fires.

An interactive fire map has been created. You can input an address to see relation to fire perimeter. There is also a ‘measure tool’. That map can be found at https://t.co/p9X2nwC34D (3/3) #CalWoodFire #LefthandCanyonFire

There was just a small amount of growth in the two fires in Boulder County on Monday. The Cal-Wood Fire is 9,365 acres and 17% contained while the Lefthand Canyon Fire is 470 acres and 4% contained.

Yesterday afternoon some road closures on US 36 north of Boulder were lifted and now US 36 is open from Broadway in North Boulder to Neva Road.

Higher elevation winds are expected at times over the next two days.

Gold Hill and Jamestown Elementary Schools are closed this week due to the fires.

BVSD has reached out to families who are impacted saying that it is important, especially during traumatic situations like this, to keep things as normal as possible for kids. BVSD says they are working to move students to schools outside of the evacuation area. Students will be able to temporarily attend Nederland or Flatirons elementary schools, depending on their situation.

The Cameron Peak fire west of Loveland and Fort Collins is more than 200,000 acres and grew again on Monday with the level of containment dropping to 51%.

Evan Direnzo, a meteorologist with the National Weather Service in Boulder said Monday that warm temperatures are in the forecast for the coming days and low humidity. There will be widespread smoke mainly after 3 PM continuing into tonight.

The Cal-Wood fire is already the largest wildfire in Boulder County history.

Northwest parts of the county are still under mandatory or voluntary evacuation orders.

Firefighters were able to limit the growth of the Cal-Wood Fire in Boulder County yesterday but Boulder County Sheriff Division Chief Mike Wagner said Sunday evening that the northern edge of the Cal-Wood fire was an area they were paying close attention to due to, “really difficult, really steep, rocky terrain and there’s just a lot of fuel availability in the area.”

The wildfire was first reported at noon Saturday near the Cal-Wood Education Center on County Road 87.

As of last night the cause of the fire and its point of origin had not been determined; but there were no lightning strikes in the area, so it was likely not started due to weather.

Boulder City Manager Jane Brautigam declared a local disaster emergency and issued an order closing the Boulder Reservoir to the public while it serves as an operations center and campsite for firefighters for both fires in the county.

Wagner said that of the 26 homes they know were destroyed, 19 were on Mountain Ridge Road near US 36 and Nelson Road; but they suspect more structures have been burned. He said that fire crews were able to prevent more loss yesterday through suppression efforts.

A federal incident team will be taking over command of the fire Monday morning.

In total, Boulder County officials said about 1,700 residences were within the mandatory evacuation area including a population of about 3,000 people.

An evacuation point has been set up at Boulder County’s North Broadway Complex at 3460 N. Broadway where evacuees can find information.

Boulder Valley School District announced Sunday evening that Gold Hill and Jamestown elementary schools will be closed today as a result of the fires. Monday is a planned day off for St. Vrain Valley students.

Many roads remain closed and officials advised people to avoid the area to give room for first responders to work.

Firefighters were made aware of the Lefthand Canyon fire Sunday afternoon but the cause of the blaze remains unknown.

An areal firefighting team was called in Sunday afternoon that successfully slowed the spread of the fire however it remains unknown if any structures have burned.

The Boulder Office of Emergency Management reports a minimum of 145 homes have been evacuated and evacuation orders are in effect for Ward and homes north of Ward, Gold Hill and the Sunshine Canyon area. An updated evacuation map can be found here.

There is an evacuation center at the Nederland Community Center and the Gilpin County Fairgrounds is accepting large evacuated animals.

As of this morning, an incident management team is now in charge of Lefthand Canyon firefighting efforts.