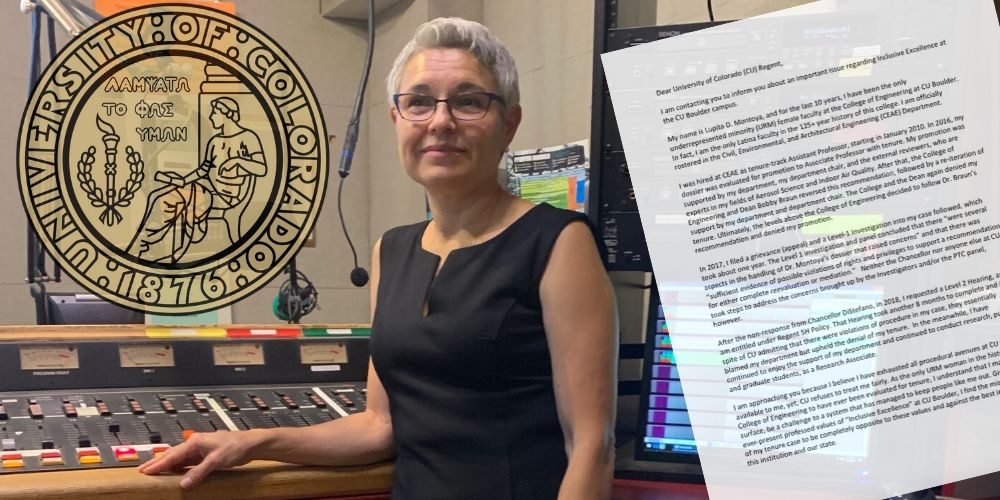 Lupita Montoya is a Research Associate at the University of Colorado Boulder in the Environmental Engineering Program.

In December she wrote to the Regents at CU expressing her dismay about how her promotion has been handled. She says that despite recommendations from her colleagues in her department, her department chair, as well as from external reviewers, she was not granted tenure.

In her letter, she writes, “All these events have been documented and paint a disturbing picture of discrimination in my tenure case. I have now filed a discrimination case with the U.S. Equal Employment Opportunity Commission and I am ready to officially file a lawsuit on these charges.”

She spoke with KGNU’s Rossana Longo about what she says are barriers facing people of color at the university.

Listen to the interview below:

She adds, “Given the ever-present professed values of “Inclusive Excellence” at CU Boulder, I find the mistreatment of my tenure case to be completely opposite to these values and against the best interest of this institution and our state.”

KGNU reached out to the University of Colorado about this case and last week we received a statement from CU Boulder that said:

“Dr. Montoya received a fair opportunity to be considered for tenure. Those who considered her case did so fairly and without prejudice. The faculty committee found that any minor procedural flaws in her case did not affect the ultimate determination.

For a closer look at the issue of local lack of diversity tune in to the Trends Podcast February 20th at 8:30 am on KGNU.

Read Dr. Montoya’s Letter to the CU Regents Below: