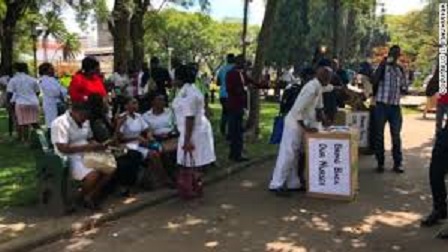 While the AIDS epidemic is in decline, the prevalence of HIV in Zimbabwe remains among the highest in the world. The US now proposes a cut in AIDS prevention. Global Fund To Fight AIDS, Tuberculosis and Malaria has made significant progress reducing the number of new cases of AIDS worldwide. We hear about programs that work and progress that has been made as we take a look at AIDS work in Zimbabwe.

Loyce Maturu of Zimbabwe and Alice Aluoch of Nairobi describe, with host, Nikki Kayser programs that are making a difference that has cut the death toll in half. Ms. Maturu has spoken around the world about the fight against TB and HIV/AIDS. She is 27 years old and was born with HIV. By age 10, she had lost both her parents and her brother. Growing up with HIV, she faced stigma and verbal abuse from some of her relatives, nearly committed suicide, missed school often due to ill health, and struggled to obtain money to get to the clinic. Loyce didn’t start receiving HIV treatment until she contracted TB when she was 12 years old. Since 2009, she has been working with AFRICaide as a volunteer peer counselor and advocacy officer on treatment, care, and support for children, adolescents and young people living with HIV.

Alice Aluoch introduces us to co-workers at RESULTS, Amanda Beals,of St. Louis and Christie Renner of Boulder, who tells us what we can do in the US to get and keep people who are HIV positive on anti-viral drugs that will keep them from getting AIDS. TB is now a greater threat than AIDS to life in Zimbabwe.