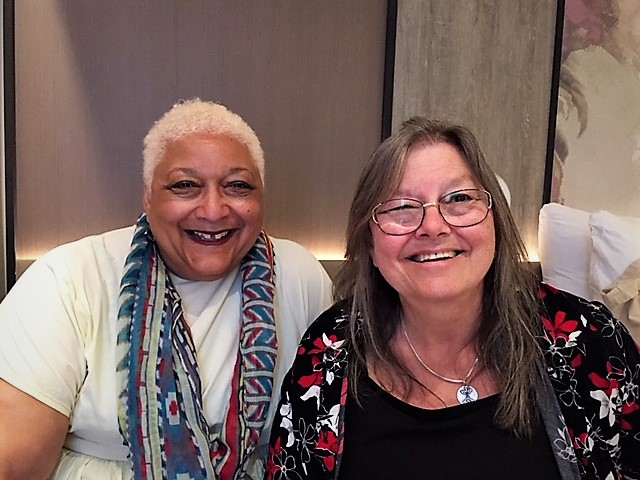 OutSources presents a special conversation with two award-winning writers who are essayists, poets, editors, lecturers, and activists. Interviewed aboard an Olivia lesbian cruise in the Caribbean, these unlikely long-time friends squeezed together on a loveseat in Dorothy’s stateroom for a humorous, wide-ranging and intimate interview.

“What I am here for is to tell you stories you may not want to hear” writes award winning author Dorothy Allison. Dorothy is a best-seller writer of short and long fiction, poetry and essays. She is an editor, visiting professor, artist in residence who has had two of her novels (Bastard Out of Carolina and Cavedweller made into movies. Bastard Out of Carolina was award winning and banned by some libraries yet lauded by critics and readers. Provocative titles include, Trash, Skin, and The Women Who Hate Me. She dubs herself a southern ex-pat who is now a born-again Californian. First born to a fifteen-year-old single waitress, she knows a few things about class and activism yet maintains a strong sense of humor.

Jewelle Gomez (Cape Verdean/Ioway/Wampanoag) is a writer of novels, essays, poetry, plays, and short fiction. She is also a literary critic, lecturer, editor of lesbian erotica and fantasy fiction. She is most known for the award winning and enduring feminist vampyr work, The Gilda Stories which has a 25-year anniversary edition and is also available as an e-book with an upcoming audio book and TV short series (by Cheryl Dunye). She has written a trilogy of plays with Waiting for Giovanni and Leaving the Blues already having premiered in NYC or San Francisco. (Leaving the Blues will premiere in July in NYC.) The Urban Bush Women performed a Gilda story through dance and music. She has been a founding member of Gay and Lesbian Alliance Against Defamation (GLAAD) and the Astreca Foundation and has been an activist since the 1970s.