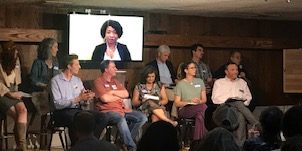 The 2019 election for Boulder City Council is still four months away. But if turnout for an event featuring potential candidates is any indication, there’s already early a lot interest in who will be the next city leaders. KGNU’s Roz Brown joined the group Boulder Progressives for the first-ever “Raucous Caucus.”

Last night the local advocacy group Boulder Progressives, decided it was time to hear from Boulderites running for Boulder City Council in November 2019. Haven’t heard who’s running?  You’re not alone. We won’t officially know until August 6 or as late as August 26 when nomination petitions are due to city hall. But as of last night, 11 people who plan to file paperwork agreed to sit on a stage at the Elks Lodge and answer questions.

Climate change action was one of the questions fielded by the participants. And they didn’t get any easier. For example: Is housing a human right? Should Boulder seek to limit employment growth? And, do you think Boulder is at its maximum population growth?

“I’m so excited about the turnout so early in the season – I think it’s great news for the fall,” said Theim.

Jonathan Hymer said he liked the rapid-fire nature of questions during the first-of-its kind caucus.

“Municipalization is really important to me, I lean toward that,” said Hymer. “I felt there wasn’t enough depth in that exchange, but I felt the housing density issue was covered well.”

After hearing from the candidates, Matt Fromer said he was optimistic.

“I tend to focus one or two ideas in city politics so I liked the broad spectrum of issues that were covered,” said Fromer. “I think it’s incredibly challenging to have to be up there and answer questions and appreciated that they were willing to work on issues they didn’t have answers for.”

Again that’s eleven so far, and why Thomas Wells came out – to put faces with names.

“I see transportation, housing and climate change as a single issue because they’re all connected and one cannot be solved without solving the others,” said Wells.

“We won’t do the Raucous Caucus again until the 2020 election, but we will have debates in September and October.” Said Moyer. “We’ll set up hard-hitting questions, no platitudes. We owe it to the community to dig into these serious topics.”

In case you’re counting, there are 19 weeks and 2 days until the 2019 Boulder City Council elections.