Dahr Jamail is an award winning investigative journalist. He’s recently written a book titled The End of Ice: Bearing Witness and Finding Meaning in the Path of Climate Disruption. The book is focused on the effect that climate change is having on communities around the globe. 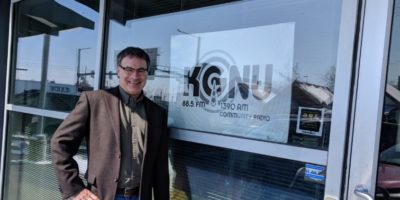 “So I went to the town of Utqiagvik (Alaska), it’s been recently re-named that from Barrow, this is obviously now it’s native name, and I went there specifically to highlight that this is happening up there, that this is a harbinger of things to come for the rest of the world. And here’s why, there’s two critical things happening. One, the permafrost upon which the entire north slope of Alaska sets upon is thawing out dramatically. I interviewed an elite scientist who’d been studying that for decades around the world, and he said at current trajectory, we’re going to see all of this permafrost reaching thaw point within roughly 30 years from now.”

This permafrost contains massive amounts of organic material, so as it begins to thaw, it’s releasing large amounts of Co2 and methane into the atmosphere. In addition to this, methane hydrate deposits are trapped within the sub-sea permafrost in the arctic ocean. Methane hydrate is a lattice of ice with methane molecules trapped inside. When warmed, it will revert back to water and methane gas. As the summer sea ice retreats dramatically, something that has been happening for decades, it exposes that sub-sea permafrost to solar radiation and warming, thus releasing more methane gas into the atmosphere. “We could actually see an abrupt catastrophic release of a massive amount of methane that is a Co2 equivalent of as much as half of the total Co2 that we’ve emitted since the industrial revolution.”