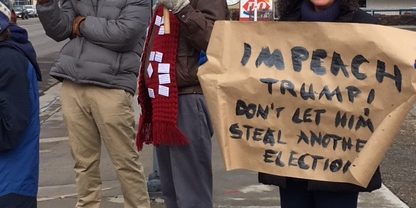 But of course, now Trump has signed a bipartisan House and Senate spending bill with way less money for a Wall than he asked for, and at the same time declared a “national emergency” on his way down to a vacation at Mara Lago.

Normally, it’s Congress who holds the purse strings. In Article 1, Section 9, Clause 7: “No Money shall be drawn from the Treasury but in Consequence of Appropriations made by Law; and a regular Statement and Account of the Receipts and Expenditures of all public Money shall be published from time to time.”
And so the lawsuits are flying, some from states like California and others from private land owners.  Since he declared an emergency simultaneously with the new compromise, Trump is making it as clear as he possibly can via the timing that the emergency decree is nothing more than a mechanism by which to seize powers that Congress refused to grant him by law. As Republicans for the rule of law have said, “It’s not an emergency, it’s a power grab.” Trump himself even said, “I didn’t need to do this.” And as Andrew Egger reports, Congress is probably going to vote on rescinding the Emergency and there are going to be majorities in both houses for it.” But they are unlikely to be veto-proof. As Ann Coulter of Fox News put it: “The goal of a national emergency is for Trump to scam the stupidest people in his base for 2 more years.”

Now,  the Trump Administration claims that The 2006 Secure Fence Act commands the executive branch to “take all actions to achieve control over the entire international land and maritime borders of the United States…,” specifically including physical barriers. 31 “national emergencies” are in force today.

When the House rescinds Trump’s National Emergency declaration, the Senate will be forced to vote on it. If you have an opinion on whether Congress should vote against Trump’s national security declaration, you can contact you congressperson and Senators.