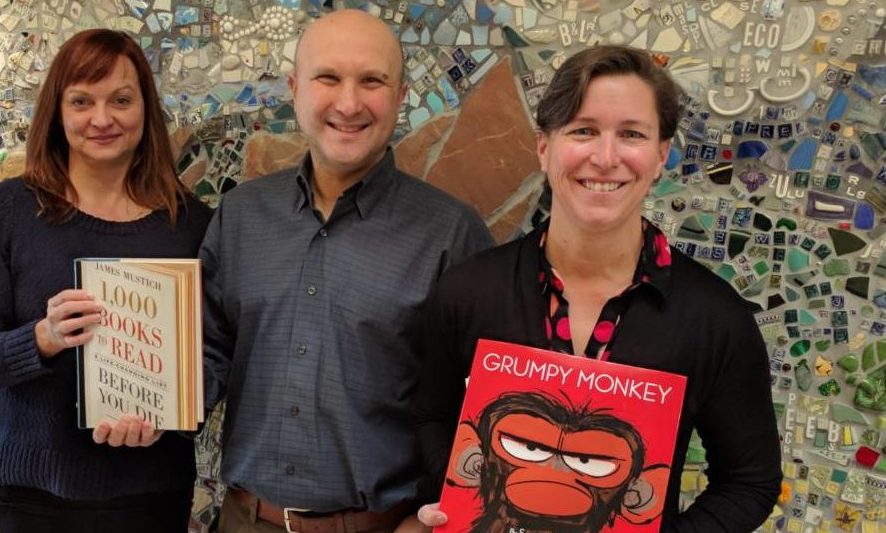 Arsen Kashkashian, head buyer, Liesl Freudenstein, head of children’s books at the Boulder Bookstore and Nicole Sullivan of the Book Bar in Denver join Maeve Conran of KGNU in the studio to share their favorite books of 2018 in our annual end of year Best Books of the year show. This show was broadcast on KGNU on Wednesday December 12 at 9am.

A Terrible Country by Keith Gessen. Andrei returns to his native Russia to take care of his ailing grandmother and discovers that there are some wonderful people in the terrible country.

Great Believers by Rebecca Makkai. The decades-long repercussions of the AIDS epidemic in Chicago are revealed in this heartbreaking, yet life-affirming novel.
Listen to Rebecca Makkai on the Radio Bookclub.

Virgil Wander by Leif Enger. Enger in wonderfully descriptive but simple language weaves a magical tale of a man and a dying Minnesota town being given a second chance.
Listen to Virgil Wander on the Radio Bookclub.

Mars Room by Rachel Kushner. Kushner presents a harrowing story of a young mother imprisoned for life after living a life with limited choices.

The New Yorker Encyclopedia of Cartoons by The New Yorker. Ten decades of cartoons are arranged into 300 thematic categories in this two-volume compendium. It’s the ultimate gift for anyone who reads the New Yorker.

1000 Books to Read Before You Die by James Mustich. Starting with Edward Abbey’s Desert Solitaire, Mustich gives us an assessment of the greatest books in history in this beautifully illustrated volume that’s a must have for bibliophiles.

Grumpy Monkey by Suzanne Lang, Max Lang. Jim the chimpanzee is in a terrible mood for no good reason. His friends can’t understand it—how can he be in a bad mood when it’s SUCH a beautiful day? They encourage him not to hunch, to smile, and to do things that make THEM happy. But Jim can’t take all the advice…and has a BIT of a meltdown. Could it be that he just needs a day to feel grumpy?

Julián Is a Mermaid by Jessica Love. While riding the subway home from the pool with his abuela one day, Julián notices three women spectacularly dressed up. Their hair billows in brilliant hues, their dresses end in fishtails, and their joy fills the train car. When Julián gets home, daydreaming of the magic he’s seen, all he can think about is dressing up just like the ladies in his own fabulous mermaid costume: a butter-yellow curtain for his tail, the fronds of a potted fern for his headdress. But what will Abuela think about the mess he makes — and even more importantly, what will she think about how Julián sees himself? Mesmerizing and full of heart, Jessica Love’s author-illustrator debut is a jubilant picture of self-love and a radiant celebration of individuality.

We Don’t Eat Our Classmates by Ryan T. Higgins. It’s the first day of school for Penelope Rex, and she can’t wait to meet her classmates. But it’s hard to make human friends when they’re so darn delicious! That is, until Penelope gets a taste of her own medicine and finds she may not be at the top of the food chain after all.

The Stuff of Stars by Marion Dane Bauer, Ekua Holmes. Before the universe was formed, before time and space existed, there was…nothing. But then…BANG! Stars caught fire and burned so long that they exploded, flinging stardust everywhere. And the ash of those stars turned into planets. Into our Earth. And into us. In a poetic text, Marion Dane Bauer takes readers from the trillionth of a second when our universe was born to the singularities that became each one of us, while vivid illustrations by Ekua Holmes capture the void before the Big Bang and the ensuing life that burst across galaxies. A seamless blend of science and art, this picture book reveals the composition of our world and beyond — and how we are all the stuff of stars.

The Mystery of the Missing Mouse Treasure by Torben Kuhlmann. A long time ago, one mouse learned to fly, another landed on the moon…what will happen in the next Mouse adventure?

The Assassination of Brangwain Spurge by M.T. Anderson, Eugene Yelchin. Uptight elfin historian Brangwain Spurge is on a mission: survive being catapulted across the mountains into goblin territory, deliver a priceless peace offering to their mysterious dark lord, and spy on the goblin kingdom — from which no elf has returned alive in more than a hundred years. Brangwain’s host, the goblin archivist Werfel, is delighted to show Brangwain around. They should be the best of friends, but a series of extraordinary double crosses, blunders, and cultural misunderstandings throws these two bumbling scholars into the middle of an international crisis that may spell death for them — and war for their nations.

Skulduggery Pleasant by Derek Land.  Meet the great Skulduggery Pleasant: wise-cracking detective, powerful magician, master of dirty tricks and burglary (in the name of the greater good, of course).  Oh yeah. And dead. Then there’s his sidekick, Stephanie. She’s… well, she’s a twelve-year-old girl. With a pair like this on the case, evil had better watch out…

Dry, Neal Shusterman, Jarrod Shusterman.  The drought—or the Tap-Out, as everyone calls it—has been going on for a while now. Everyone’s lives have become an endless list of don’ts: don’t water the lawn, don’t fill up your pool, don’t take long showers. Until the taps run dry.

The Hazel Wood, A Novel by Melissa Albert. Seventeen-year-old Alice and her mother have spent most of Alice’s life on the road, always a step ahead of the uncanny bad luck biting at their heels. But when Alice’s grandmother, the reclusive author of a cult-classic book of pitch-dark fairy tales, dies alone on her estate the Hazel Wood, Alice learns how bad her luck can really get: Her mother is stolen away—by a figure who claims to have come from the Hinterland, the cruel supernatural world where her grandmother’s stories are set. Alice’s only lead on finding her is the message she left behind: “Stay away from the Hazel Wood.”

The Boneless Mercies by April Genevieve Tucholke. Frey, Ovie, Juniper, and Runa are the Boneless Mercies—girls hired to kill quickly, quietly, and mercifully. But Frey is weary of the death trade and, having been raised on the heroic sagas of her people, dreams of a bigger life.  When she hears of an unstoppable monster ravaging a nearby town, Frey decides this is the Mercies’ one chance out. The fame and fortune of bringing down such a beast would ensure a new future for all the Mercies. In fact, her actions may change the story arc of women everywhere.

The Waiter by Matias Faldbakken.

The Witch Elm by Tana French. Irish crime writer Tana French returns with this mystery that features Toby, who is a happy-go-lucky charmer who’s dodged a scrape at work and is celebrating with friends when the night takes a turn that will change his life: he surprises two burglars who beat him and leave him for dead. Struggling to recover from his injuries, beginning to understand that he might never be the same man again, he takes refuge at his family’s ancestral home to care for his dying uncle Hugo. Then a skull is found in the trunk of an elm tree in the garden – and as detectives close in, Toby is forced to face the possibility that his past may not be what he has always believed.

Don’t Skip Out on Me by Willy Vlautin. This latest book by Vlautin, who is also a musician and front man of the Alt-Country group Richmond Fontaine, follows protagonist Horace Hopper as he tries to find himself as he leaves a sheep ranch in Nevada to reinvent himself as a boxer. Listen to Vlautin speak about Don’t Skip Out on Me on the Radio Bookclub.

Milkman by Anna Burns. This is the winner of the 2018 Booker prize from Northern Irish writer Anna Burns who writes about an unnamed city, which is interesting is dangerous. Middle sister, our protagonist, is busy attempting to keep her mother from discovering her maybe-boyfriend and to keep everyone in the dark about her encounter with Milkman. But when first brother-in-law sniffs out her struggle, and rumors start to swell, middle sister becomes ‘interesting’. The last thing she ever wanted to be. To be interesting is to be noticed and to be noticed is dangerous…

Milkman is a tale of gossip and hearsay, silence and deliberate deafness. It is the story of inaction with enormous consequences.