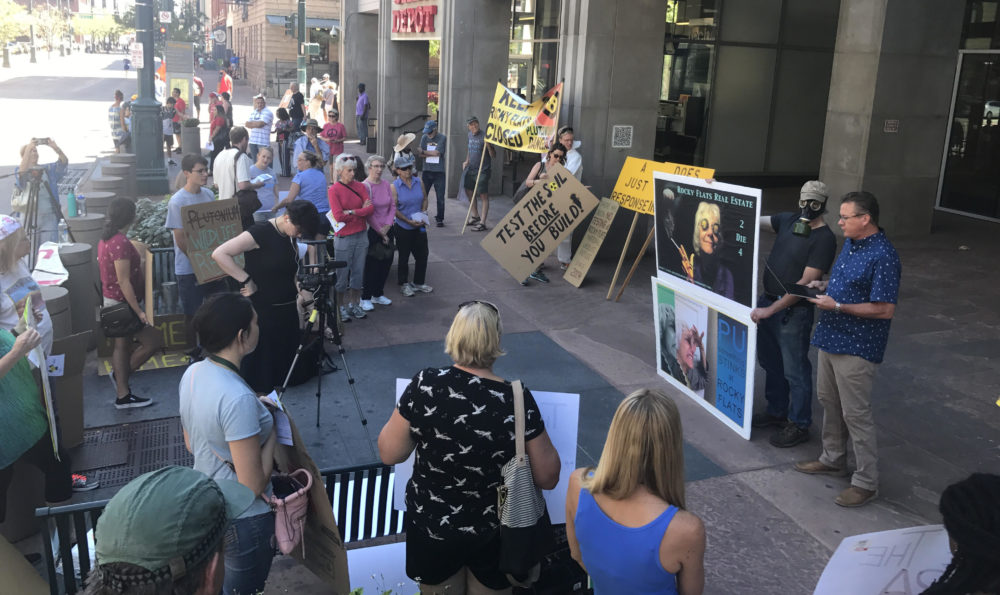 The National Wildlife Refuge at Rocky Flats opened on Saturday September 15th with some bikers and hikers accessing areas that surround restricted sites where plutonium triggers were made for nuclear weapons.

audio and photo of protest at EPA office by Paul Karolyi.

Paul Karolyi spoke with some protestors who were at the site. Ramon Gabrieloff-Parish who lives close to the area, in Superior, says that a lot of people are coming to the wildlife refuge without knowing the toxic legacy of the area.

“People have no idea what this place really is and they have no idea what really happened here. And I think it’s because it’s radioactivity and it doesn’t smell bad, it doesn’t look bad, it’s not an eye-sore – people think it’s safe, people think there’s no problem. And so really we’re out here to keep people awake to what this land is and what has happened here and what’s really happening here.”

Other protestors gathered at the EPA office in Denver’s LoDo district to voice their concerns.  Randy Stafford, a Jefferson County resident and a member of the Jefferson Parkway Advisory Committee.

Environmental groups have said that human activity at the site will stir up plutonium particles; but the EPA and the state health department have said that the refuge is safe for workers and visitors.

A coalition of groups including the Rocky Mountain Peace and Justice Center has sued to block the opening, but a judge refused to do so while the suit is still pending.

Several school districts, including Boulder, Denver and Jefferson County have banned their teachers from taking students to Rocky Flats on field trips.  We’ll have more on the opening of the Rocky Flats Refuge after headlines.