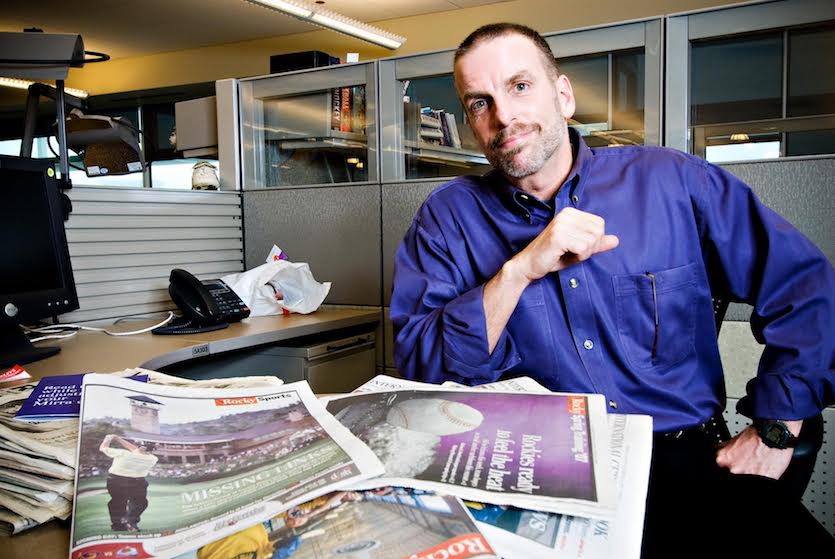 The Boulder Daily Camera editorial editor was fired last week after he self-published a piece highly critical of the New York hedge fund that owns the Camera as well as the Denver Post.  As KGNU’s Roz Brown reports, Dave Krieger had been with the Camera three-and-half years and says he’s worried the Camera won’t be around much longer.

Until last week, Krieger wrote all the editorials for the Daily Camera. He says the Camera’s current business model is forcing the paper to its knees, and the 128-year daily will not survive if its New York owner, Alden Global Capital continues to extract larger and larger profits by reducing the Camera’s staff. The editorial Krieger had penned for the Camera said Alden is endangering the paper’s future. He self-published his editorial, after the newspaper’s publisher said the Camera would not carry it. Krieger says it was the first time his content had been censored since he joined the Camera.

“This violated the basic, and really sort-of sacred norm in journalism, which is that journalists make those decisions and publishers or business people do not,” said Krieger. “That’s just rule number one, and there’s no decent journalism organization in the country that does not abide by that rule because by definition there’s a tension between the interests of the business side and interests of the editorial side. So this was the first time the business side said no, we’re going to start making these editorial decisions. And once that happens, editorial people have to stand up and say, ‘no.’”

The Camera has been Boulder’s main daily newspaper since 1890, but Krieger argues that if Alden continues to drain cash from the paper by cutting staff, then in-depth coverage of local civic issues could suffer.

“When I started on this debate, about whether we should write on this, the key point was that this is an important story for Boulder and Boulder should know about it, and the story is that it’s newspaper is on the verge of death, that it’s on a trajectory toward death,” said Krieger. “That’s what Alden policies of milking it for all of the cash it can are doing to the paper. The only end is that the paper ends up closing. My position was that Boulder needs to know about this. The only reason they don’t know is because it’s happening to the town’s “story teller.” We would tell the story about any other 128-year old Boulder institution.  If Boulder wants to save this institution, it should know it’s in dire peril and take whatever steps it wants to take. If Boulder doesn’t want to save it, that’s O.K. too, as long as it knows this is happening,” said Krieger.

Krieger wanted his editorial to run in the Camera as a follow-up to the Denver Post’s critical editorial about Alden on April 8th, following the announcement that one-third of the Post staff will be cut this year. Post editors called on Alden to sell the paper, rather than continue reducing staff and its ability to provide Front Range news coverage. Krieger says it might be time for Boulder to do the same.

“If the ownership of the Boulder Daily Camera is so corrupt, that it will not even allow itself to be used as a platform for a discussion of this important civic issue. If it is so corrupt that it will suppress any mention of this important Boulder issue, then I have to admit it might not be worth saving. If the principle is that Boulder needs a public square like the Camera to discuss Boulder’s civic issues then the question is whether Boulder needs to create a platform of its own not run by a New York hedge fund.”

As the Camera’s editor, Krieger has had supporters and critics but says his opinion pieces were always his own, and not influenced by the hedge-fund owners.

“We were accused often when we failed to support certain causes like municipalization, that we were carrying water for our corporate overlords,” said Krieger. “But nobody who said that ever called me to ask what pressure I got, and if they had I would have told them zero. I never got a call from Alden about content, I was influence-free until this, so my conclusion is that they don’t care about content at all, they care about cash, until the content is about them, and then they step in.”

Several Boulder citizens have reported sending letters to the Camera’s editorial page about Krieger’s termination, but none had been printed as of Sunday April 29th.