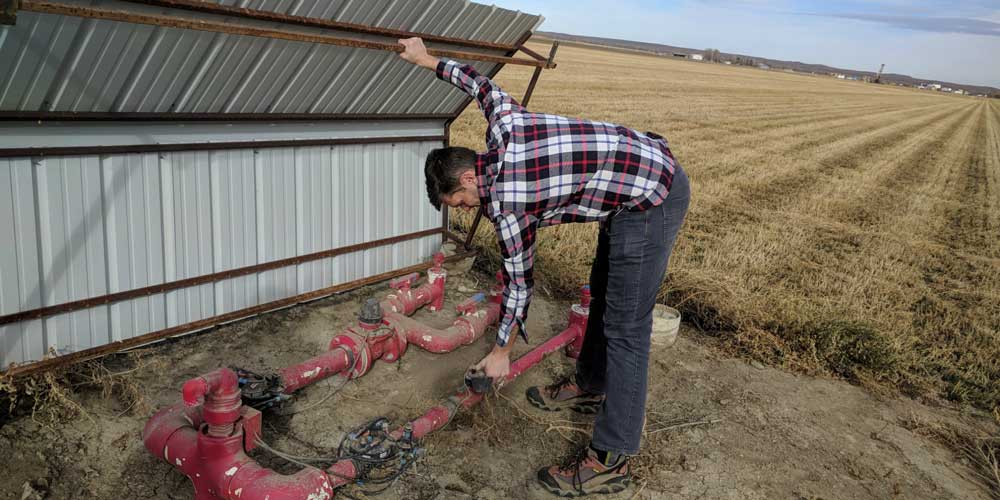 It’s one of the most often quoted parts of Colorado water law, and in some ways, the most misunderstood. Use it or lose it. That means water rights holders who don’t use all their water could have those rights diminished. And that use it or lose it mentality is often seen as a barrier to water conservation, particularly in agriculture. But recent changes to Colorado law, and research into water conservation could lead to changes in irrigation practices. For Connecting the Drops, Maeve Conran reports.

Above Image: Jason VonLembke, VP of United Water Sanitation District and Project manager for SIEP checks a pump system for the drip irrigation at the SIEP research facility.

Heading east, past Greeley and Kersey in Northern Colorado, the landscape is dotted with Alfalfa farms and oil and gas rigs. And right off Highway 34, there’s something else…to the casual observer it looks like all the other farms in this agricultural belt, but it’s home to a cutting edge research facility that could hold a solution to Colorado’s looming water woes.

Jason VonLembke is Vice President of United Water Sanitation District and project manager for this research site that has a rather fitting acronym.

“We Say seep….like it seeps out of the drip irrigator”

It’s actually SIEP, and it stands for Subsurface Irrigation Efficiency Project. Throughout this 70 acre farm, high tech drip tape is placed in rows approximately 3 feet apart, 10 inches below the ground. Drip irrigation is highly efficient with water being applied directly to the root of the plant. Compare that to more commonly used forms of irrigation like sprinklers and flood irrigation. Every drop of water on this 70 acre farm is controlled and monitored and it allows researchers like Manijeh Varzi to control how much water goes to a plant, and see what happens when less water is applied.

“Some of them are getting 30% of total crop water requirement, some get 50, some get 70 and there is one control plot that gets all the water that the plant needs.”

One of the crops they’re looking at here is Alfalfa which Varsi says has a direct relationship with the water it receives.

“That means that if you reduce 30% of the water that the crop is receiving, you’re going to see the same amount of reduction in your yield.”

As far as research goes, it’s early days, just 3 years into a project that could last 3 decades, and they plan to look at other crops with Varsi says may do much better with less water. SIEP was inspired by similar technology being used on arid land  in and around Israel, and is a collaboration between several entities including Colorado State University and United Water Sanitation District where VonLembke is vice president.

They supply municipal water and as such, have a stake in this research. That’s because growing municipalities are eyeing agriculture which uses about 80% of the state’s water.  Municipalities have bought water rights from farmers in the past, permanently drying up farmland. The Colorado Water Plan has identified alternative methods to leave some water for crops and share the rest with growing towns. What this project is really trying to show is how farms can use less water so they can lease some of their supply to municipalities.

“Perhaps the city could buy half or 60% of a senior water right and use that for their urban needs and then as part of that purchase help supplement the cost of installing subsurface drip irrigation, and purchase a junior water right.”

But installing this type of system is expensive at about $1700 an acre. A special filtration system and GPS technology are needed in addition to the high tech drip tape. But the other barrier VonLembke sees is motivation and the fear some farmers have of losing their historic water rights.

“Right now with the laws being the way they are with water rights, there isn’t really an incentive for growers to save their water. They do apply as much as they can because if they don’t it just runs down the stream.”

This gets back to the use it or lose it adage. Something John Stulp says is widely misunderstood. Stulp is former Commissioner for Agriculture in Colorado. He is now a Special Policy Advisor to the Governor for Water.

“That’s somewhat of a misnomer, unfortunately it rolls off the tongue too easy. you really have to go out of your way to intentionally abandon a water right in Colorado, to really end up with no water right. And so we’re trying to make sure that irrigators understand that, that they can participate in these programs and that their beneficial consumptive use portion of their water right is preserved and held in tact.”

Recent legislation like HB 1233 protects farmers on the quantification of their water right in the courts. So those periods of time that they’re participating in an approved conservation practice, that won’t be held against them. Stulp acknowledges the cost of drip irrigation as a factor also for farmers already operating on narrow profit margins.

Farmers are operating on very narrow profit margins. It’s very difficult for a farmer to go to his banker and want to increase his expenses to put in certain irrigation efficiencies.”

The SIEP researchers are looking to partner with farmers to see how other crops respond to less water.  In addition VonLembke hopes that municipalities will look at drip irrigation as an option for their parks and open spaces.

“So if we had a widespread adoption of that technology on the urban  side, we could ease demand on ag in general. So, you know both sides could use this technology to open up supplies for each other and satisfy some of those needs we’re going to have in the future.

A lot of discussion is happening around how to effectively share water across all users in the state. But with a growing population and projections showing less water being available, some, like VonLembke say the time to move from discussion to action is fast approaching.

“I think we’re eventually going to be pushed into a situation where we’re going to have to adopt these type of conservation techniques and wouldn’t it be nice if we already had the answers at hand?”