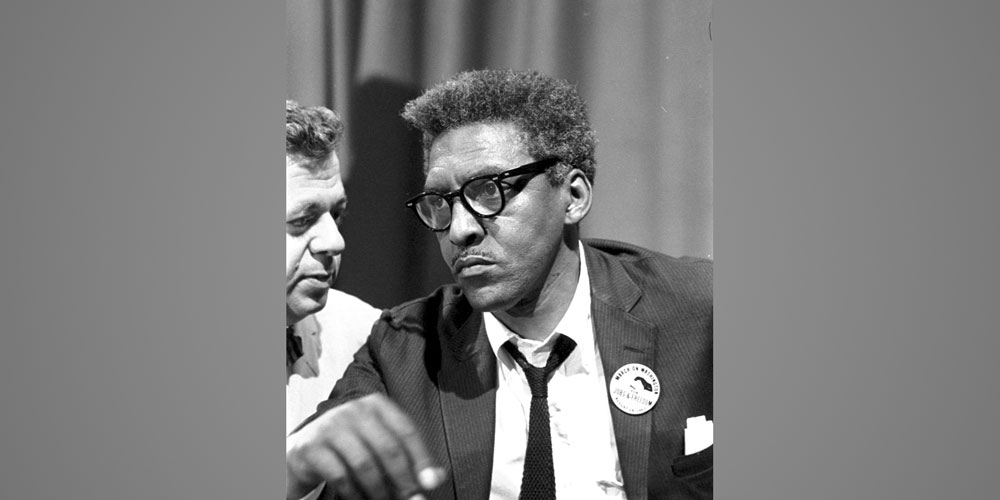 Bayard Rustin was an openly gay African American man shunned by many but considered to be one of the most brilliant strategists of civil rights in the 1960s and a lifelong activist for social justice.  He was arrested many times and imprisoned twice, once for being a conscientious objector about war and opposing segregation in the military and once for refusing to move to the back of the bus when crossing from the north to the south. (Despite the Supreme Court having already ruled it illegal.)

For the bus charge, he was put on a North Carolina chain gang and when released wrote about his experience and got them abolished. He taught Martin Luther King, Jr. about Gandhi’s active nonviolent action approach and helped found the Southern Christian Leadership Conference with MLK. In 1963 he was lead organizer of the largest march on Washington ever. Yet due to pressure about being openly gay, Bayard worked closely with but behind the scenes until well after King’s assassination.

He worked his whole life here and abroad against social injustice until his death in 1987. A multi-talented man, Bayard was a singer, actor, football player, author in addition to his civil rights word that he took world-wide.  He was awarded the Presidential Medal of Freedom posthumously by former President Obama.

Steve Milloy, composed a choral narrative about part of his life that the GLBTQSA chorus Harmony plus special guests will present. On Outsources we discuss Bayard Rustin’s life, what it can teach us, and how it applies to Black Lives Matter today. Guests include composer Steve Milloy, Harmony director Bill Loper, singer Hazel Miller, and vocalist Mark Boykins.

‘The Man Behind The Dream’ panel and choral event will be held February 3 (Denver) and 11 (Greeley).  Details can be found at www.harmonychorale.org