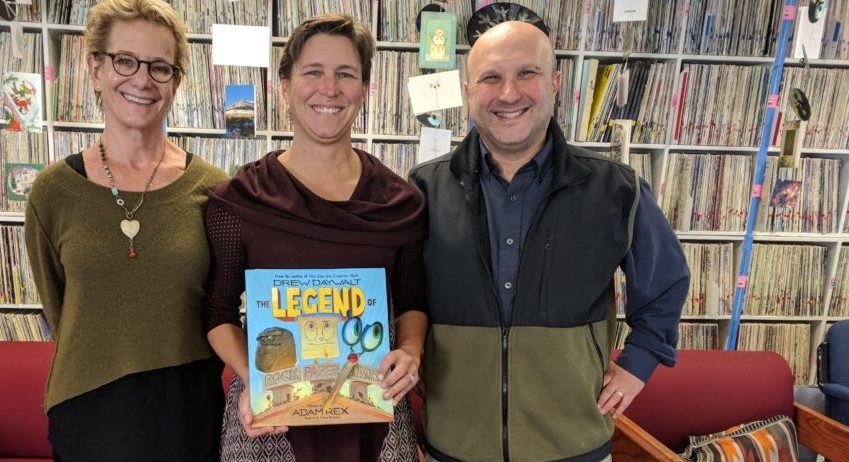 Arsen Kashkashian, head buyer of the Boulder Bookstore, Liesl Freudenstein – children’s buyer at the Boulder Bookstore and Cathy Langer, who is getting ready to retire after 4 decades as a book buyer and book seller at the Tattered Cover, join us to review the top sellers and their personal favorite books of 2017.

Blue Hour by Laura Pritchett. This novel brings together the moving stories of the residents of a fictional Colorado mountain town. Pritchett’s prose is lively and the descriptions of her rugged yet vulnerable characters ring true.

Home Fire by Kamila Shamsie. A modern retelling of Antigone the Greek tragedy. Shamsie’s classical themes play out in contemporary England where a Muslim family is trapped by its radical past and an inflexible society.

Wild Horse Country by David Philipps. The mustang is a powerful symbol of the American West. Phillips gives the history of how these beautiful wild animals came to live in the dry arroyos and wayward canyons of our region. He addresses their present challenges amidst hostile ranchers and offers some possible solutions.

Obama: An Intimate Portrait by Pete Souza. Souza had unfettered access to Obama during his Presidency as the official photography. The images present a man of great dignity and humanity. The photos are both heartbreaking and inspiring when viewed in the context of today’s political climate.

Quiet Until the Thaw by Alexandra Fuller. The author of the famed memoir Don’t Let’s Go To the Dogs gives us her first novel. Fuller’s story follows the lives of two brothers on the Pine Ridge reservation. The story is told in small, poetic sections that create a crystalline image of this world of hardship and beauty.

Sing, Unburied Sing by Jesmyn Ward. This is a dark and powerful novel about so many hard subjects: race, addition, grief, but her incredible writing makes the experience profound and rewarding. Now that it won the National Book Award it will be easier to handsell.

Exit West by Mohsid Hamid. Another slim but powerful novel. Hamid writes of refugees and migration in fable-like prose and tells the story of lovers Nadia and Saeed escaping an unnamed war country through doors that bring them across oceans and deserts in search of safely and a new place to call home.

Manhattan Beach by Jennifer Egan. New York before and during WWII is the setting for this riveting novel. We meet Anna Kerrigan when she is twelve and accompanying her father on his dodgy, mob related deliveries. A chance meeting with a nightclub owner will change the course of her life. Egan nails New York in the ’40s and weaves a riveting and beautifully written tale. Unputdownable, as they say.

Anything is Possible by Elizabeth Strout. Now on to small town America, in 9 linked stories that read like a novel, Strout compassionately explores rural poverty and the myriad of complications, disappointments, jealousies and joys of the human experience.

Newcomers by Helen Thorpe. Thorpe’s third book follows recent immigrant teens in the Newcomer class at South High in Denver. A beautifully written and in-depth look at refugees finding their we to American and through the difficult process of resettling. I learned so much from this book. It was a pleasure to read and full of joy.

7 Days of Us by Francesca Hornak. A much needed romp! The holidays are always a stressful time, but imagine being with your immediate family for a full seven days of quarantine! This is the premise of Hornak’s Seven Days of Us. To ride out the weeklong quarantine imposed due to daughter Olivia’s work treating patients of an epidemic in Liberia, the Birch family plans to spend the Christmas holiday in mother Emma’s crumbling ancestral home, Weyfield Hall, in Norfolk. On top of isolation and the lack of escape, each member of the family is dealing with their own secrets.

The Legend of Rock Paper Scissors by Drew Daywalt and Adam Rex.

After the Fall (How Humpty Dumpty Got Back Up Again) by Dan Santat.

Armstrong:The Adventurous Journey of a Mouse to the Moon by Torben Kuhlmann.

An Enchantment of Ravens by Margaret Rogerson.

Turtles All the Way Down by John Green.

Timeless: Diego and the Rangers of the Vastlantic by Armand Baltazar.

The War I Finally Won by Kimberly Brubaker Bradley.

Here We Are: Notes for Living on Planet Earth by Oliver Jeffers.