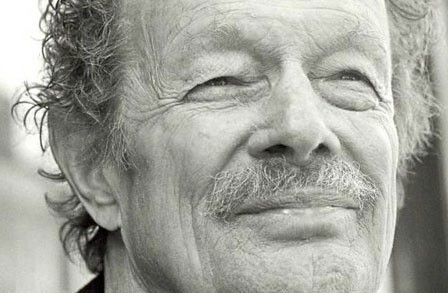 Jack Collom, a poet from Colorado, taught poetry and ecology in the Rocky Mountain region.

He wrote tirelessly about his environs, both outer and inner, since his first book of verse, Blue Heron & IBC, was published in 1972. At Naropa University, where he taught in the Jack Kerouac School of Disembodied Poetics since 1986, Collom developed eco-lit curricula as well as pedagogies for elementary and secondary schools to activate poetry and ecology simultaneously in the classroom.

Jack Collom was born John Aldridge Collom on November 8, 1931, in Chicago, Illinois. His parents were secondary school teachers who encouraged young Jack’s interest in nature. A bird-watcher from the age of 11, Jack Collom took up nonviolent outdoorsmanship. He preferred birding and trekking over hunting and trapping. In 1947, when he was 16 years old, his family moved to the small cold town of Fraser, Colorado. He graduated from high school in a class of four, going on to forestry school at what is now Colorado State University at Fort Collins.

After a stint in the Air Force in Germany and North Africa, Collom spent the late 1950s and early 1960s learning his chops at verse writing in and around New York City and other places. He began working in factories in Connecticut, moonlighting as a poet and editor. He edited the literary magazine The from 1966 to 1977.

Around 1974 he began teaching in Poetry in the Schools programs in Colorado, Wyoming, and Nebraska, and in 1980 he became a full-time poet in the public schools of New York City. His early teaching approaches are developed in his book, Moving Windows (1985). A variety of writing experiments that join charmed language with ecological study are included in Poetry Everywhere (1994). In that book, and as a first assignment for many groups, Collom asked for write a list of “Things to Save,” including both personal possessions and the wonders of our planet earth. Other forms Collom was  wont to assign include “Compost-based Poems,” “ìPlace Poems,” “Recipes” (how to make a horse, a planet, for example), and “Talking to Animals.”

Collom researched animals nose to tail, and he had a penchant for small vertebrates. Animals of particular interest to Collom are mice, fox, passenger pigeons, the blue heron, as well as migratory songbirds.

In addition to his  books of poetry, Collom wrote essays on eco-poetics in which he explains his unique and creative approach to impending ecological collapse. He wrote in his 1994 essay, “On, at, around Active Eco-Lit,” ìPerhaps some poetry, in its eco-response, can reach forward in time, and humanize or enchant scientific prophecy.”

Like many poets, he was annoyed by pure science’s tendency to quantify all things. In the same essay, he advised, “Out there is the sense of an endless supply, & endlessness equals unpredictability. Once things can be counted, they’re almost gone.”

Jack Collom is survived by his wife Jennifer Heath, his sons Nat, Chris and Franz from Edeltraud (1st wife), daughter Sierra from Mara (2nd wife), and his grandson Joshua.