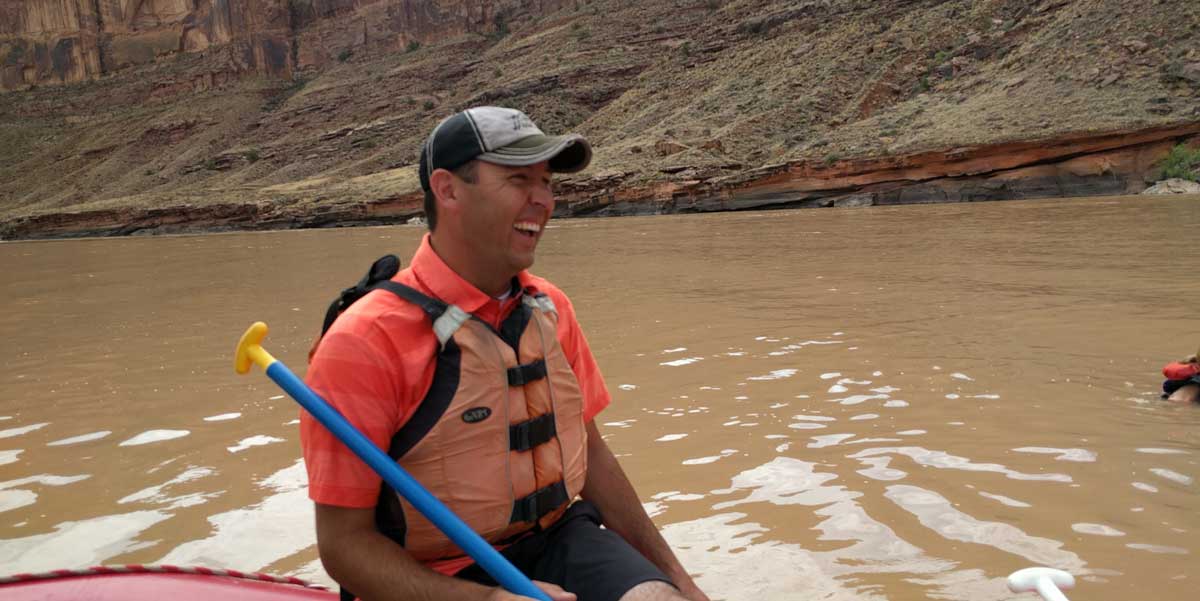 “We’re trying to recreate something man-made that was originally part of nature.”

The Colorado River flows out of the state of Colorado into Utah, our neighbor to the west.  Here in Moab the water is an economic giant for the town, with thousands of rafters floating downstream every year.

But the river along this stretch is experiencing problems. Changes in how the water flows due to dams upstream are impacting native fish, however efforts are underway to help mitigate the damage done to the river, to restore the wetlands and ultimately the native fish population.

Ryan Jolley (image above) is a wetlands engineer with Jones and DeMille Engineering. He’s working with the Upper Colorado River Endangered FishRecovery Implementation Program, a collaboration between the Utah Division of Wildlife Resources and other agencies, to restore the wetlands along the Colorado River as it runs through Moab.

Jolley says that the dams on the Upper Colorado River Basin, as well as the Flaming Gorge Dam on the Green River in Northern Utah, have fundamentally impacted the river. This is due to changes in how the water flows through the river because of the controlled releases of water from the dams.

“As we did our study for the engineering on the wetland project, one of the things we noticed is that the hydrology changed significantly in the ‘50s. In the ‘50s you had a lot of significant spikes and low flows that were very visible.” In the later years, those spikes were leveled off due to controlled water released from the reservoirs “so you didn’t have the extreme high flows or the extreme low flows.”

The native fish species evolved to take advantage of those flows. “The fish, when they spawned, they would spawn when the hydrograph, or the water flows were increasing on the river. The fish, the younger the year fish would then hatch and then migrate into these wetland areas to be protected from the main river system and the larger fish and that’s where they grew up. And then the next year as they matured when it flooded again, then they would migrate back down into the river system with those floods.”

Since the floods were removed from the river system with the construction of the dams, the fish don’t have that annual cycle, “so the younger the year (fish) are all being eaten (by larger fish) or they’re not maturing, not being able to grow up.”

That’s the key to the project on the Matheson Wetland which Jolley says uses man-made structures to make the environment more hospitable for the native fish.  “Excavating out a portion of the wetland, creating a pond system that’s lower, that’s more connected to the river, and then because it’s connected we put in control gates that allow water in and we can hold it in and then we have to allow that water to go out afterwards. It’s all about man control now. We’re trying to recreate something man-made that was originally part of nature.”

KGNU News Director Maeve Conran is on the Colorado River this week with the Institute for Journalism and Natural Resources, meeting people impacted by changes in water flows due to water diversions to the Front Range and climate change. We’re featuring these stories in this series Dispatches From The River.