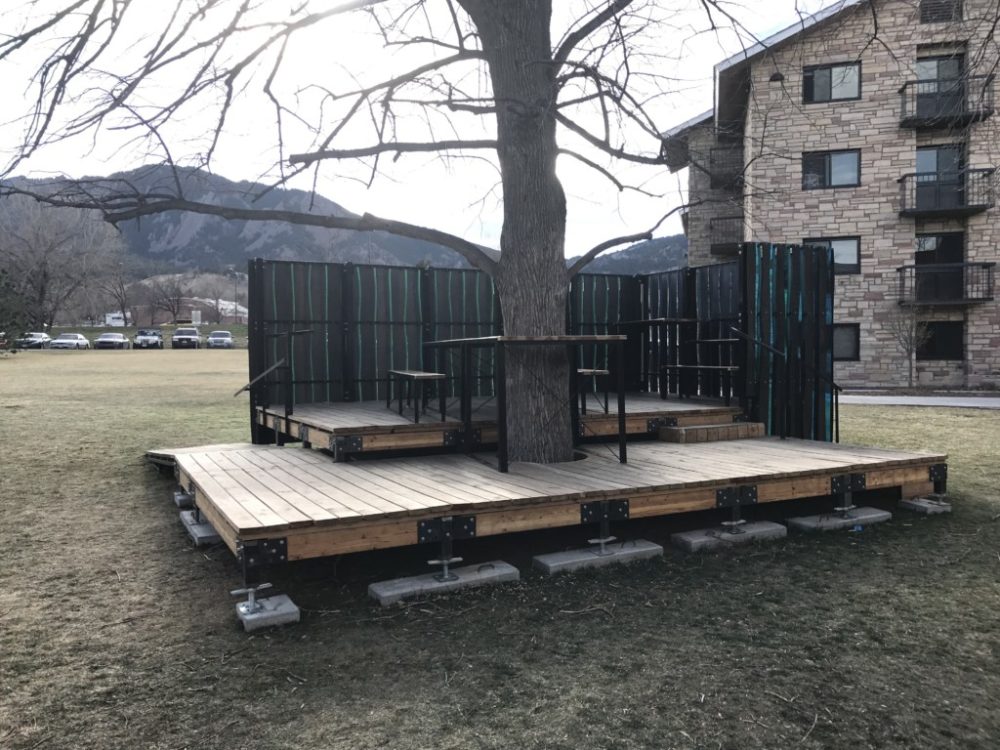 CU Boulder has a new place to study and relax. Sitting in the Kittredge Complex on Main Campus, it’s not what you might expect of an office…KGNU’s Julia Caulfield reports on how architecture meets environment to create a new kind of workspace.

If you drive past CU Boulder, you might see a shimmering wall encompassing a tree on the southern end of campus. That’s the TREExOFFICE. It’s a new art installation, work space hybrid created by students in the CU Program of Environmental Design.

Inspired by artist Natalie Jeremijenko, TREExOFFICEs have sprung up in London, New York, and Berlin. They are collective workspaces that intend to bring awareness to things like the rights of nature, and the natural systems around us.

Marcel de Lange, is a senior instructor in the Program of Environmental Design at CU Boulder. Last year, he taught a class where students could take all they’d learned in the classroom and put it to work. In collaboration with EcoArts Connections and BMoCA, de Lange’s students designed and built their own TREExOFFICE.

The TREExOFFICE is a two level platform, with tables, and benches. There’s individual workspace, and a long table for group meetings. On two sides is a glistening wall that helps to block out some of the sun and wind…in addition to being it’s own art sculpture. And in the middle of it all is a sturdy Linden tree–the focus and inspiration of the project.

“This particular project has no foundation in a traditional sense because it was a very important concept, but the tree had to be completely respected; it could not be attached to, which is a challenge, because when you build a treehouse you start banging nails into the tree. In this particular case we needed to build around the tree, the roots could not be compressed upon too much, so we cannot dig holes.”

But before the TREExOFFICE was a reality, it existed as a collection of models, and computer files in a fabrication studio off campus. The studio feels like a big warehouse, there is a woo dshop, a metal working studio, and multiple computer controlled lasers and drills. 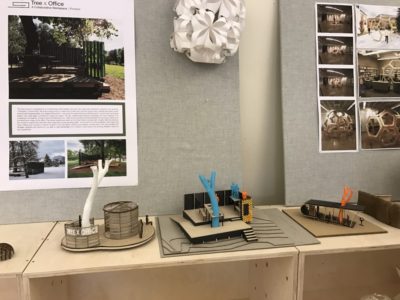 Using models and computer programs, the students created digital files that could direct the machines to cut wood and metal into the shapes they needed to build the project.

“This is really the quickest way to make lots of process models, so we can really iterate through ideas quickly…so these are just little laser beds, and you can cut out pretty much any shapes or forms, you just pop a piece of material in there, run your file, and it cuts it out.”

That’s Daniel Kelso, a student in the Program of Environmental Design, and one of the students involved in designing and building the TREExOFFICE. He says they designed the structure so that once the pieces were fabricated, the construction would be relatively simple.

“Once everything was fabricated, it’s like, you know, it’s like giant legos for adult architecture students. And it’s pretty intuitive too, you know, you’re just bolting beams together. So with the proper kit of parts and a set instructions it could be replicated at any city park.”

According to Drew Landis, another student involved in the project, developing the structure in this way, using basic components, was intentional.

“The idea of being able to design something like this, that is so modular, it’s one of the things we really focused on for our design, was making it modular, so that other communities, could potentially, in an ideal world there’s a company that fabricates all this stuff, so a community can build a tree office outside their school, their library…and it allows them to utilize what we did here in Boulder.” 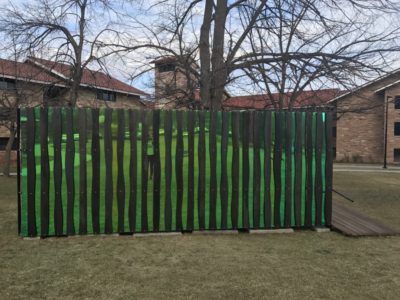 Both Kelso and Landis say they like the idea that other communities could have their own TREExOFFICE to serve as a gathering place.

Before landing at CU, their TREExOFFICE was at BMoCA for three months. While there, it was the site of several panel discussions about topics from homelessness to refugees.

Back on campus, de Lange says he hopes that type of event continues, and the space will allow the community to come together, and actively engage with each other.

“That would be my hope, that people use it just to work, to sit, to hang out, to read a book on, to do homework, but also once every month or every couple weeks there will be an event, and activity, something that speaks to the general population of Boulder to come out and want to come out and converse and address an issue.”

On Thursday March 16th at 5:30pm, there will be a opening celebration of the TREExOFFICE on the CU Boulder campus. It’s currently open to the public, and starting on April 15th, people will be able to make reservations for tables.

Businesses and city groups can conduct meetings, and groups and individuals can use the space to perform. To reserve a desk, conference table or the entire TxO, visit CU Boulder’s Community Engagement, Design and Research Center’s (CEDaR) website.