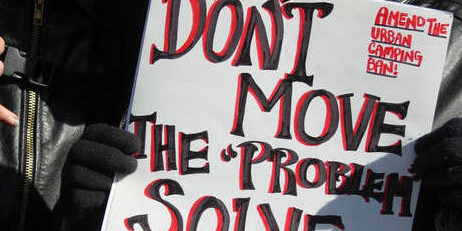 “It makes homelessness less visible in our community but it doesn’t do anything to solve any of the underlying problems.”

On Tuesday March 7th, Fort Collins’ City Council will be consider a proposal to make it a crime, punishable by up to six months in jail and a $2650 fine, to sit, lie, or kneel in large portions of downtown. The proposal also calls for criminalizing having more “attended property” than a person can carry, like a cart filled with personal belongings, or heavy luggage.

Lynn Thompson with the Fort Collins Homeless Coalition says that the ordinance targets homeless people as it  takes aim at sitting, kneeling, or lying that is completely out of the flow of traffic, but that offends the sensibilities of some. In other words, this ordinance is simply about people who don’t want to see others sitting or lying on the sideway, or possessing personal belongings. “Laws like this, laws that restrict harmless acts like sitting or having stuff in public are enforced almost entirely against people who are homeless or who are experiencing homelessness here in Fort Collins. We know that from looking at how these laws are enforced in other places and we also know that from looking at how similar laws are being enforced right now in our town.”  Fort Collins has a camping ban similar to Boulder and Denver. Thompson says that Fort Collins has a high rate of enforcement of that law. “We gave out 257 camping tickets under one ordinance alone last year. We enforce our camping ordinance quite a bit here in Fort Collins, I think second only to Boulder in the state.”

Thompson says that individuals and organizations throughout Fort Collins have spoken out against this proposal. She says homelessness is becoming more visible in Fort Collins. “It’s not really a sheer numbers question so much as people are encountering the sight of people who are experiencing homelessness which is kind of a visible form of extreme poverty right here in our community. And you know communities don’t always adapt well to that and I think there are people who are uncomfortable seeing that and who maybe out of a misguided sense of compassion even are concerned, but voice those concerns in a “I don’t want to see this in my community,” and so this kind of measure, a measure against sitting downtown, acts to push people out of downtown areas. It makes homelessness less visible in our community but it doesn’t do anything to solve any of the underlying problems.”

The ACLU of Colorado called an earlier version of this proposal: “one of the most outrageous, cruel and absurd examples that we have seen yet of a proposed ordinance clearly targeting unhoused persons.”