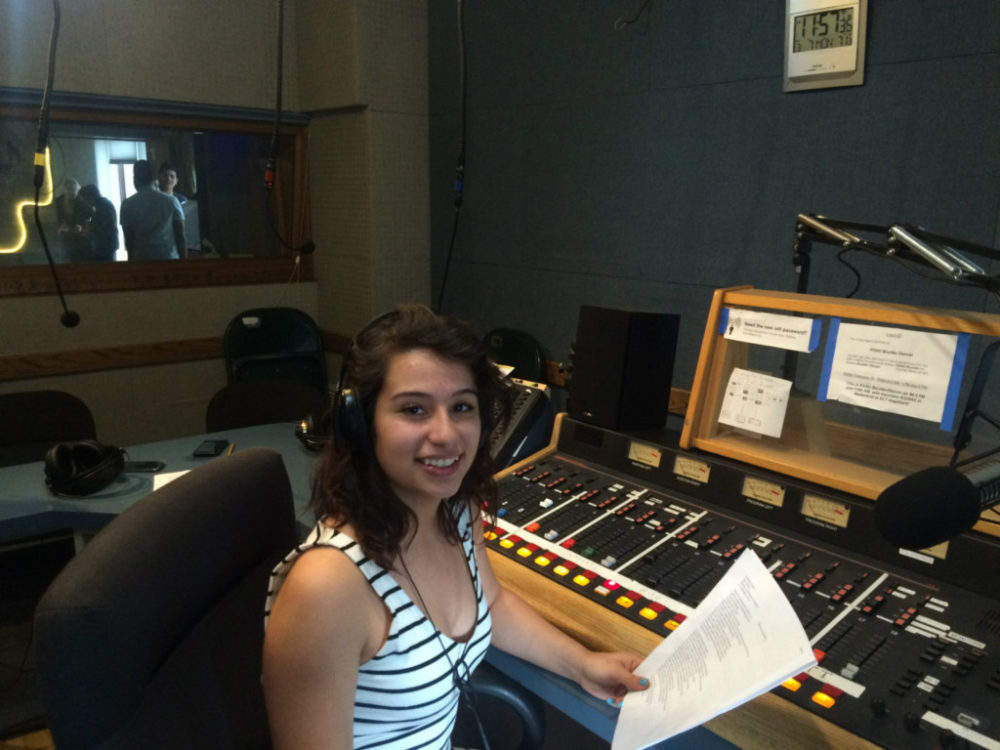 It’s That Time of the Month

Students from Manual High School in Denver visited KGNU recently to record some of their poetry. In their 10th grade American Literature class, the students have been writing, discussing, and reading about “The American Dream”. They’ve been inspired to write their own poetry on this theme.

It’s That Time of the Month
By: AniSurei Vazquez

I came from
“you don’t need to play basketball, you can play dress up instead”
from
“put that drill down and let your cousin Richard fix it”
from
“the pink lipstick and curly hair looks best on a girl like you”
from
“Oh ignore her, it’s just mood swings”
from
“Scream if a stranger approaches you, it’s impossible to overpower”
from
“Because Dad said so, you know the man of the house makes the rules”

I came from being stressed of my appearance
being told over and over to make sure I keep myself flawless because that’s what matters.
what matters is how a girl looks waking up and going to bed at night,
how I act matters as a woman,
if I show I can do what a man can do it is such an outrageous thing to do
it is as crazy as seeing me go bull riding
but that alone is questioned, because ladies can only ride horses,
while holding onto the waist of a man.
I came from being thought less of because being a female,
it’s god forbidden to get my hands dirty
As a female it is frowned upon for me to work as a construction worker
As a female it is questioned for me to become a sports coach
As a female it is never to be considered for me to get the promotion at the company I work with

I came from
growing up watching what I wear
the feeling of judgment wrapping my head
while I choose an outfit for the day
After being whistled and hollered at like I am some animal needing attention
I am to be blamed for, as if my clothes were asking for it.

I came from having to wait in the car while my dad goes into the store
because he tells me “boys haven’t learned see females as human beings, not a sexual object”
Instead of changing how women
What isn’t fair is that I am interrupted in class for my shoulders showing
because the boys get distracted, I am responsible to make sure I change my appearance
I came from
being taught to fear older men, because they can easily snatch me.
instead of teaching me self-defense, I am told to ask if they know the password
I came from
being taught there is no hope if I get snatched,
never being taught to fight for my life because it’s worth it.
Being taught that men are always stronger than you
never being taught that women have just as much power

Going into the workforce
An upper class male has a better chance than a female to get an impressive interview
It must be our appearance that throws off the leadership characteristics we hold
With a pay higher than us for the same work
I become afraid to see the day I work the way my mother works
just to earn seventy-five cents for your every dollar.
All those missing quarters add up like the hornets population in a hornets nest

I came from not being taken seriously when I am mad
because when I hear something unacceptable,
I act to defend myself by giving a response.
Except my words mean nothing because their response is
“Is it your time of the month?”
As a female
I came from having my anger misinterpreted as mood swings,
as if it is impossible for a females’ anger to be a natural human reaction.
As a female
I came from being ignored because my anger is assumed to be mood swings,
while I am later expected to apologize.
A female’s anger seems to be either “unacceptable” or normal because females are “bitchy”
while males can be angry and females are shown to be able to “take it”
or better not talk back.

As a female
You can play varsity basketball, if you give it your all
You don’t need to have a man in your life to feel worthy
You can work any job as long as you work it to your best ability
you don’t need to wear makeup to look appealing to anyone else but yourself
you can verbally defend yourself without being a bitch
you don’t need to believe that women are weaker than men in any way

As a female I am defined by the words delicacy and prettiness
I came from enforcing that definition on myself
But those words don’t need to mean helpless and sorry
As a human I can do anything any other human can.