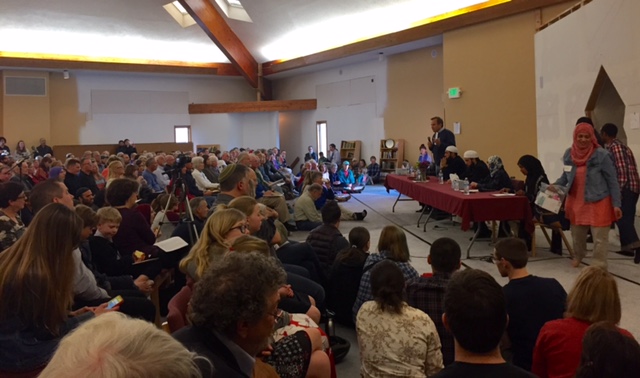 Boulder showed its solidarity with Muslim Americans on Sunday, February 19 when hundreds of people turned out for an open house sponsored by Boulder’s Islamic Center. The Center decided to open its doors after receiving an outpouring of support from local residents following the Trump administration’s ban on immigrants from seven mostly Muslim countries earlier in the month.

The invitation for the open house at the Islamic Center read, Meet Your Muslim Neighbors. Ann Wirth is the administrative director at another Boulder church and she told KGNU’s Roz Brown that her congregants wanted more information about what the Islam religion is about and that’s why she attended.

“In the nature of inclusiveness and understanding our community we as a group came over today to support and show our love for our neighbors,” said Wirth.

Heraa Hasmi was one of the organizers of the event. She said it made sense to offer local residents more information about the Islamic Center now because the mainstream media often portrays her religion in a negative light.

“We need to be part of our own conversation and with so many people reaching out to us an open house made sense to show that you can come and get to know us, we’re not scary – you got out alive – and develop friendships and strong bonds and learn from one another and be really kind to each other. “

Kindness was also on the mind of Ayuba Mensah who helps lead prayers at the Islamic Center. He said the open house was a big sign that neighbors love and support Muslims and they see that the United States is about justice.

The Islamic Open House fell on the anniversary of the 75th anniversary of the day when a presidential executive order was signed that lead to the incarceration of more than 100,000 people of Japanese descent following the attack on Pearl Harbor during World War II. Rhonda Akin wanted to attend because three generations of her own family were interned during that time.

“My family members were city leaders in San Jose, California,” said Akin. “And it’s clear Muslim community members are now being considered the dangerous “other” much like the Japanese were then. I could cry right now thinking about the refugees
who are in distress because this fear has been precipitated again.”

Boulder County District Attorney Stan Garnett, one of the speakers at the open house came to reassure the Islamic Community that local law enforcement officers will be vigilant – especially in light of a recent bomb threat at Boulder’s Jewish Community Center.

“We’ve done a lot with Boulder’s faith communities to make sure everyone knows that they will be protected regardless of ethnicity, religious background, nationality or immigrant status,” said Garnett. “The Islamic Center is important to Boulder and we want them to know they should not be quiet. If they see something they should call my office or the police especially because last week we had an uptick in incidents against the Latin American immigrant community. We’re doing what we can with events like today to build confidence and seek justice for people when a crime has been committed.”

Boulder’s Islamic Center was founded in the 1970s but many in attendance were first time visitors who wanted to show solidarity.

Boulder County law enforcement reminds residents that if they witness or hear about any hate crime incidents in the community, they should call, 303-447-3700.