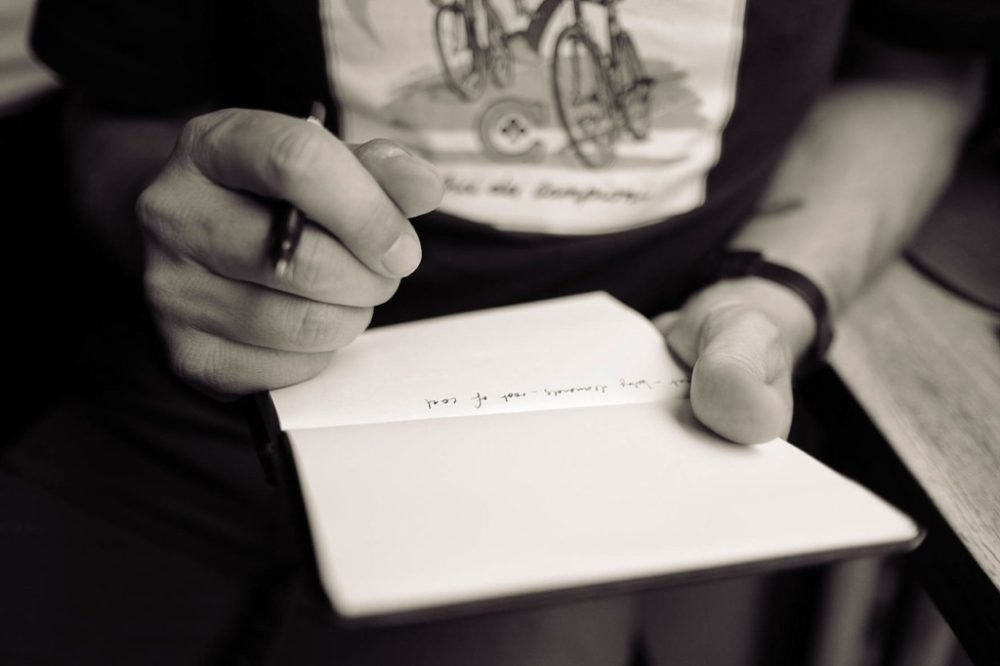 “It’s hard for them to wrap their heads around something like this, particularly the fact that we just elected a bully, elected a misogynist, elected someone who is clearly an Islamaphobe to the highest office in the land.”

Nabil Echchaibi is chair and associate professor of media studies and associate director of the Center for Media, Religion at the University of Colorado. He is the director of their Muslims in the Mountain West Project and is currently writing his book, “Unmosquing Islam: Muslim Media and Alternative Modernity.”

The day after the 2016 election he was faced with explaining to his two sons how America could elect an Islamophobic, sexist, racist bully to be the next President.

“It’s hard for them to wrap their heads around something like this, particularly the fact that we just elected a bully, elected a misogynist, elected someone who is clearly an Islamaphobe to the highest office in the land.”

Echchaibi wrote a letter to his younger son who is 12 years old that was published in Yes! magazine. The letter was to acknowledge his anxieties but also to inspire hope. “We need to also allow our children to express those fears but we also need to reassure them that this is a land of laws, this is a land where lots of things have happened, impossible things have happened and we  need to continue with that message and I think that’s what he wanted to hear at that very moment.”

Nabil Echchaibi’s letter to his 12 year old son on the election of Donald Trump. This was published in Yes! magazine.

Last week we discovered a merchant of fear has barreled into the White House, and, on Sunday, he reiterated his threat to deport millions of people. Because I am Arab and Muslim, that nightmare keeps my 12-year-old son awake at night. He has questions that I’m now trying to answer.

Will Trump deport you because you are Arab and Muslim?

No, son. He can’t just kick people out of the country because he pleases. There is a rule of law, and I have faith in millions of Americans to defend my right to be here. This is not a dictatorship where the leader acts in complete disregard of the constitution. He did trump the logic of politics, but he cannot trump the law.

So why are your eyes so teary? Are you afraid?

I’m not afraid. I’m just terribly sad because I came here more than two decades ago, and this is the first time I feel vulnerable. I feel like I’ve been robbed of something fundamental: a belief in human decency, in respect of people different from you, in social justice for the poor, the weak, the defenseless, in treating women with dignity, and in a country that would prevent racist and misogynist bullies from becoming president.

I came here because I believed in the idea of America.

Remember when I told you and your brother that I am Moroccan by birth and nationality, Arab by love and inculcation, European by force and fascination, and American by adoption and hope? I’ve lived in a lot of countries, and I didn’t come to America just to study or to make money. I came here because I believed in the idea of America, in the hope that this place represents for millions of immigrants. A place where a refugee who faces treacherous seas to flee from war and persecution can live freely and thrive with their family. A place where a poor immigrant with big aspirations can find renewal.

My eyes are tearing up because millions of Americans are giving up on the hope that transported me across the ocean and sustained me over some tumultuous years, even after the horror of 9/11. Those who insulted us then and questioned our love and loyalty for this country were mostly marginal groups without much power. They called for the building of walls, for extreme vetting, for deportation, and for a vicious cultural withdrawal. I am sad today because that drumbeat of hate has reached the White House.

Why did so many people allow this to happen? Are they all racist?

I don’t think so. Of course, some are, just like in every society. People are often fearful of what they don’t know. There are some who may not be bigots but perhaps voted on one issue and overlooked the rest. Sometimes people rationalize their choices by refusing to see the dangerous implications of their votes. This is a lesson for you when you will be old enough to vote. Voting is a huge responsibility, particularly in this country. An American vote will affect people’s lives here as well as people’s lives around the world.

We can’t wallow in our sadness.

I grew up in a country where voting was a futile exercise in an imaginary democracy. I didn’t vote then because my voice counted as much as a murmur in a crowded market. Here, your vote is a loudspeaker that can allow you to change things for the better. Never assume your vote has no consequence.

People talk about going to Canada. Are we going to move again?

No, son. I didn’t come so far, leaving my loved ones behind, to give up easily.

So what do we do now?

We can’t wallow in our sadness. If Trump’s vision of America is a world of fractures, walls, bullies, and exceptionalism, then we need to strike back by offering another vision, of openings and respect, celebrating differences and love. This is how we get our country back.

Remember the story I told you about that Syrian pianist who took his piano in front of the ruins of bombed buildings in his hometown and started playing beautiful music? He could have become bitter in the face of tragedy, but he didn’t because he knew that love can trump hate. That resolve is what we need more of today, and I count on you to keep the hope alive. Always remember that—optimism is a responsibility.

Hope is a weapon of defiance against the violent ideas of racism, sexism, Islamophobia, homophobia, and paranoia. It will inspire us to act.