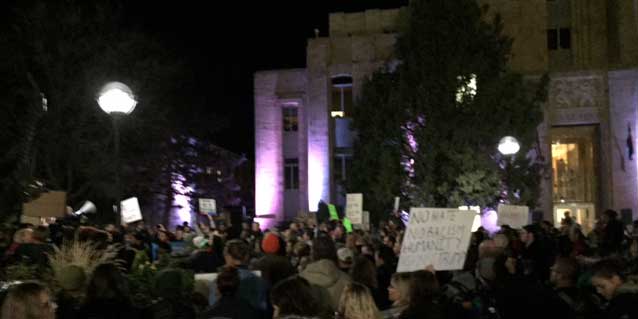 Colorado joined many other states across the country on Thursday November 10th,  as voters unhappy with the choice of Donald Trump as the next president of the United States took to the streets in Boulder and Denver. Denver protesters caused a partial closure of I-25 for a short time after gathering on the steps of the State Capitol last night and then marching to the 16th Street Mall.  It was the second night in a row protesters filled Denver’s Streets.

In Boulder, the crowd grew steadily at the Boulder County Courthouse until about 1,000 protesters made their way along the Pearl Street Mall and marched up Broadway toward the University of Colorado at various times blocking traffic and closing U.S. 36 for a short time.  ” Love Trumps Hate” was the theme of the protest but as the evening wore on many speakers expressed their outrage over the bigoted comments Trump made during the election and his efforts to pit one group of Americans against another. The protests followed walk-outs on Wednesday at several local high schools.  KGNU was at the Boulder Courthouse and shares some of the voices from the protest.

On Sunday November 13th in Lafayette, a youth organized event brought people together. Richard Garcia, a Boulder Valley School District board member addressed the crowd and said we must stand in solidarity with those who are most directly impacted.  He invited people to take a pledge that they won’t tolerate any type of bigotry or racism or negative comments towards anyone in the schools. “I pledge to stand up against hate and violence, to stand unified with this community in love and to fight for what I believe is right through love and not hate.”

Boulder County residents will gather at an emergency meeting on Monday November 14th at 6 pm at the UMC Fountains on the CU Boulder campus, to collectively strategize next steps the Boulder community will take to successfully organize their communities under a Trump presidency.

Even organizer Michaela Mujica-Steiner, the Colorado Statewide Organizer with 350 Action, says the event is opening with a rally and vigil and will feature community leaders speaking about both the despair they feel, as well as the hope and opportunity this political moment presents. Further direct action that communities will be taking will be discussed and action plans set into motion. This event is looking to be a seed in the continuation of community resilience and direct action against the hate and bigotry a Trump presidency represents.

On Monday November 14th, Lee Shainis of Intercambio and Mardi Moore of Out Boulder spoke on KGNU about the impact of the elections on local immigrant communities and the LGBTQ community.