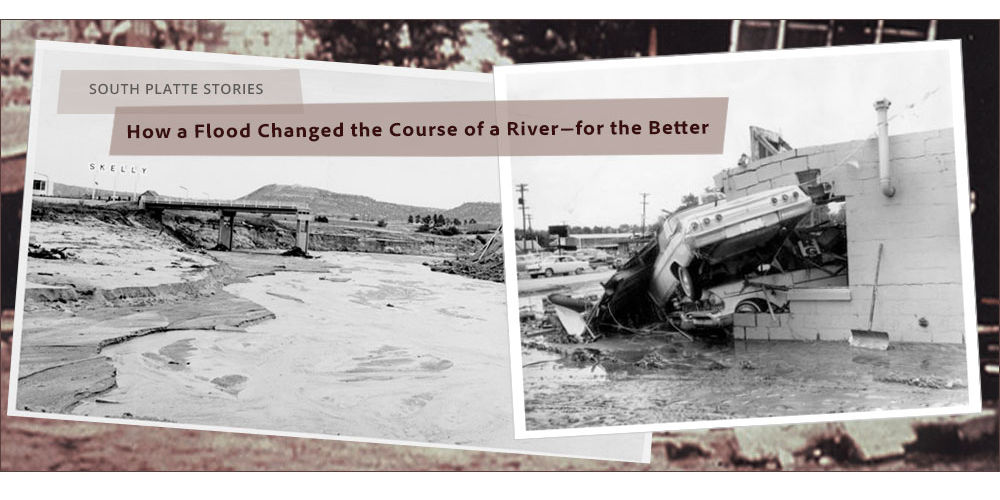 “In 50 years, it is a complete 180 degree change.” -Jeff Shoemaker, Executive Director of The Greenway Foundation

In 1965, the South Platte River was a disgusting bit of water running through Denver. It was a place where people would just dump their garbage. The idea of it being a nice place to hang out or enjoy like Denver residents do today was unthinkable. Then came the flood.

“That sent a twenty foot wall of water carrying propane tanks, cars, tires, telephone poles, livestock, entire mobile homes, just about anything it could scoop up in its path to carve destruction and chaos.”-Jamie Sudler, Executive Producer of H2O Radio.

On June 16th, 1965, a wall of water rushed into the city and devastated Denver. The city lost thousands of homes and businesses in the flood, destroyed city infrastructure, and caused the deaths of 21 people. It was a disaster of epic proportions from a forgotten river.

“It’s almost as if, in June of 1965, the river said, “Enough is enough,” and let loose a fury no one could have imagined.”-Frani Halperin, Executive Producer of H2O Radio.

The South Platte River was a polluted place that only factories and poor people would build near. It was a repository for refuse and sewage. After the flood, the city was forced to deal with the river. That meant building a dam in order to stop any more floods, which led to trying to resurrect the river as a viable ecosystem.

“Even as the South Platte was on its way to being tamed, it was still ecologically dead. It was said you could hear the flow, but not see the water through all the trash.”-Frani Halperin.

“There’s no done. What was polluted for hundreds of years is just finally getting back to where it can be and it should be.” -Jeff Shoemaker.

This story is from Frani Halperin and Jamie Sudler of H2O Radio where you can find many more stories about water and the environment.