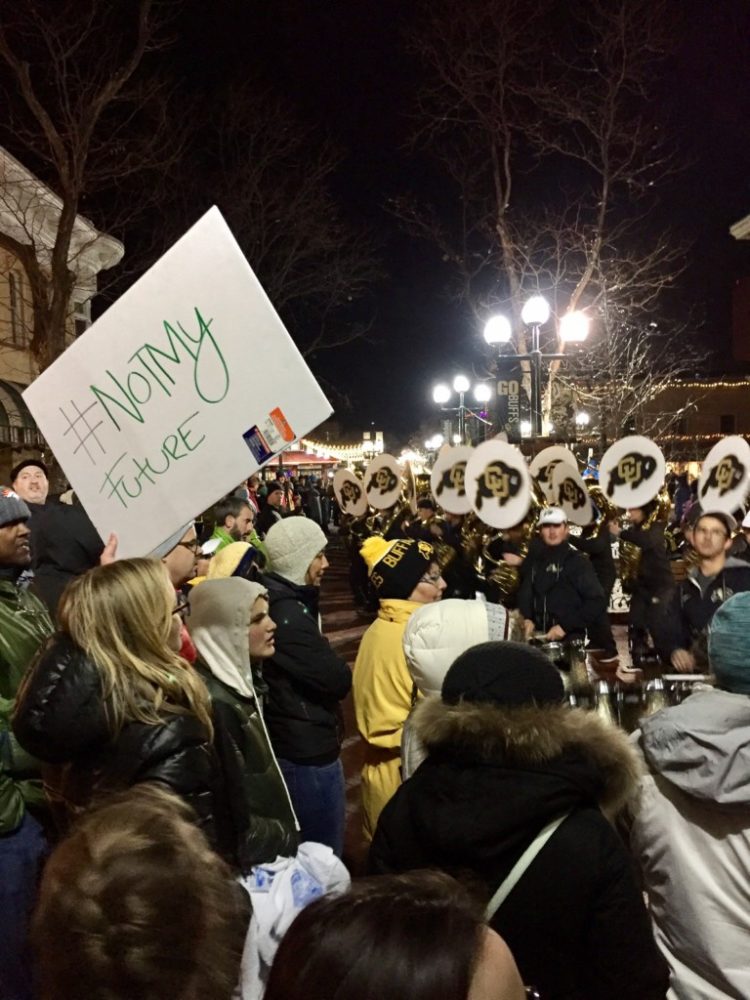 KGNU’s Kaley LaQuea reports that the protest, organized by the Colorado chapter of Direct Action Everywhere, brought together individuals in the community angered and motivated by the election of Donald Trump on Nov. 9. Aidan Cook is a CU student and organizer with Direct Action Everywhere, a group that has been working within the community to connect groups with others who want to become involved.

“Basically DXE is a group that seeks to build communities and renormalize protest and direct action as methods of political discourse toward the goal of achieving both human and animal
liberation. Because of that we’re not really experts on any of these issues that have been brought to the fore by last week’s election. Some really poignant examples of course would be immigration, immigrant rights, a lot of implications of religious discrimination and the status of Muslims and Muslim immigrants in our country, of course reproductive rights, and the list goes on. So we’ve been reaching out to a lot of different organizations to try to say we’re in a possibly a unique position to mobilize a lot of the energy that’s come up as a result of the last election, and how can we use that energy and how can we direct that energy to help your cause and to advance the work you’ve already been doing. That conversation takes a lot more than one week to start”

Cook gave participants the opportunity to address the crowd on various issues. Robert Cooper, a Longmont resident, implored white citizens to take action within the community to speak out against racism.

“We must show up. We must. If we don’t, this isn’t gonna work…I just encourage you to take up the conversation. Have the tough conversations. You wanna be an ally? Then quit being silent. silence is violence.” 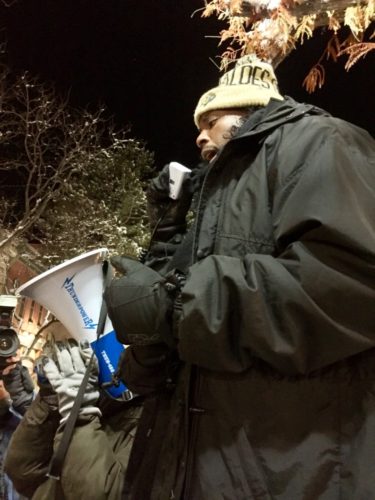 CU alum and Black Student Alliance member Conrad Obi felt positive about steps toward progress and racial understanding as a result of the protest and activist outreach.

“I think it’s very inclusive. The thing about CO is there’s not a lot of black people here in general, compared to the white population so I think it’s very inclusive, people are very welcoming.
I’m here because I wanna make sure that the people in Boulder county, the people you know around Colorado have the info they need going forward, because what’s going on with a lot of the miseducation, and also having trump being elected, a lot of people are confused, they don’t know how it happened, they’re not – they don’t understand you know, so I’m here to spread the word, to be visible, to be seen with my brothers and sisters out here.”

But there is a tension between many minorities and people of color and others in the activist
community. Attendees of color, like Laura Gonzalez expressed general frustration toward activist movements in Boulder.

“I don’t think they’re unintentionally inclusive. They do try to include people of color; unintentionally they don’t because they don’t realize their privilege. I think boulder is not. We live in a bubble here in boulder and I am at fault as well. I have forgotten how big this bubble is. I think the first step for people to include other minorities is to honestly realize your privilege and accept it and admit it.. and to know how much history you go back and you had a headstart a
long time ago compared to minorities. I think once you admit that, right, then your second step
should be to talk to other white folks that don’t realize it, because they don’t do it on purpose. I think they don’t wanna sit down, they get offended. When I have talked to a lot of people about it, they get very defensive. Does that make me be inclusive? No not at all.”

Annie Lo has lived in Boulder for four years, but has never really felt a part of the community.

“It’s just very painful living here. It’s more painful living other places, because boulder is very privileged city, but it’s still painful because of that. I’ve known how I feel about boulder as a city in terms of race for a while, most of the time I’ve put that to the side though just to go about my daily life. But then when the election happened, immediately, I felt in danger, and immediately I was scared for my family and my friends. There’s just that sense of I knew which took some people a while to realize, and some people still don’t realize, that like this WWII happening in America was imminent. I knew that situation and I felt it and I tapped into that collective conscious of people everywhere and was like alright I have to give up that daily life now and I have to work to fight this because there’s no other option. As a person of color I feel like even more deep because my entire life I’ve known racism and I know how bad it can get. With this kind of thing happening it was just like, I saw the depth of what was gonna happen immediately.

Lo has been active with the Black Lives Matter movement in Boulder for the past few
years and attended Friday’s protest, but remained dismayed.

“I think it was good he had people come speak at the beginning, that was a good opportunity to hear different voices. I didn’t really feel welcomed. It just felt like oh this is another protest with white liberals, I’m not really interested to be here, that’s how I felt. Boulder was created to be a city for white upper class people. I don’t know if that’s something that I can dismantle. The whole of it is created to oppress and exclude people of color, working class people, I mean, that’s what the systems of boulder are about. In terms of activism, it just shows up there too. You’re just marginalized in the activist comm. as much as you are in daily life, as a person of color being in Boulder.”