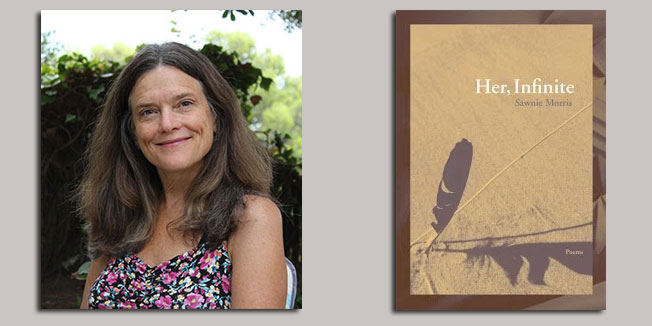 Her, Infinite is a newly released, award winning, full-length collection of poems by Sawnie Morris of Taos, New Mexico. She explores “The Story within the Story: Unleashing the Poem at the Center of Our Lives.” Harvard Review describes her collection as “refusing the fatalistic disharmony between humans and nature…recovering us back to our spiritual significance.” Morris’ themes are easy to relate to. The poems enact a healing, with the poet as note-taker and celebrant. She chats with host Nikki Kayser on Metro Arts.

Sawnie Morris reads from Her, Infinite at the Boulder Bookstore November 1st at 7:30 on 1107 Pearl St.

Morris won the 2015 New Issues Poetry Prize (judge: Major Jackson) for Her, Infinite, published by New Issues Press in the spring of 2016. Her work is forthcoming in Best American Experimental Writing, 2016 (Wesleyan University Press), online edition and sh is winner of the 2016 Ruth Stone Poetry Prize (judge: Lee Upton). Poets & Writers Magazine is doing a feature on Sawnie in their November/December issue. Sawnie has also been honored with a Poetry Society of America George Bogin Award and has been a co-winner of the New Mexico Book Award for her chapbook in The Sound a Raven Makes, published by Tres Chicas Books. Her writing about poetry and poets has appeared in the Boston Review, Kenyon Review, and Contemporary Literary Criticism.

Sawnie Morris is also a co-founder and past executive director of Amigos Bravos: Because Water Matters, a highly accomplished non-profit advocacy organization for the waters of New Mexico. Although she has lived in New Mexico for several decades, she says her life as a poet and activist took root in the Boulder community. She is a graduate of the University of Colorado, Boulder, and was actively involved in the movement to stop nuclear weapons production at Rocky Flats.