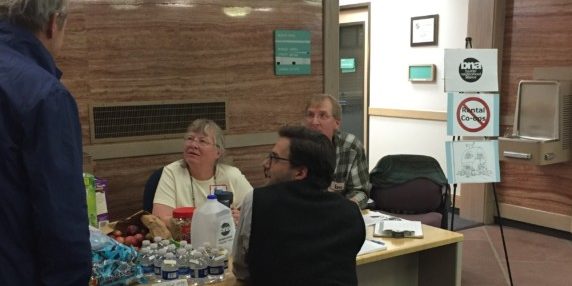 On Tuesday October 4th, more than 100 people signed up to tell Boulder City Council how they feel about expanding the number and location of city housing co-ops.  Boulder residents for and against a newly revised ordinance that’s being considered, packed city council chambers.

Boulder’s ordinance would allow around 15 new licensed housing co-ops per year. A minimum of 6 people and a maximum of 12 people could live there.  Neighbors would be need to be notified if a single family home was converting to a co-op.

Steve Winter leads a group that supports expanding the number and location of housing co-ops. He told KGNU’s Roz Brown that co-ops can help strengthen neighborhoods.

“Can’t we have a spirit of community and positivity from the neighborhood level to the city council and can’t we all figure out how we can live together both regular or normal families and cooperative families on the same block.”

Many long-term residents in Boulder neighborhoods testified at the meeting to say that they have not had any luck in getting the city to enforce current regulations on existing co-ops.  That’s a concern of Boulder resident June Crenshaw.

“The policing is not going to happen unless we do it as neighbors and I don’t think I should have that responsibility.”

“My main concern is that I don’t think it’s been tested and I don’t think we know it can be successful.  And I think if there are rental co-ops they should be in high density areas and see how they work there. And if they’re successful then come on let’s talk about it more.”

Dan Hunter has lived in Boulder since the early 1970’s and says the co-op issue is indicative of a bigger  problem in housing in the city.

“In part it seems to me like I guess it’s the City Council encourages businesses like Google to come in, which seems like a wonderful situation on the surface, but here’s 1500 people – one, where they’re locating, the traffic right now is horrendous, and it’ going to be much worse when they’re coming and going to work, it’s going to put a lot of pressure on housing. But there’s no forethought, or it seems like there’s no forethought, on where are these people going to live and who they’re going to force out.”

Hunter says that more consideration needs to be given to long term residents who are being impacted by the growth happening in the city.  “It doesn’t help the homeowners that have been here for many years.”

A third hearing on the ordinance will be held in December.