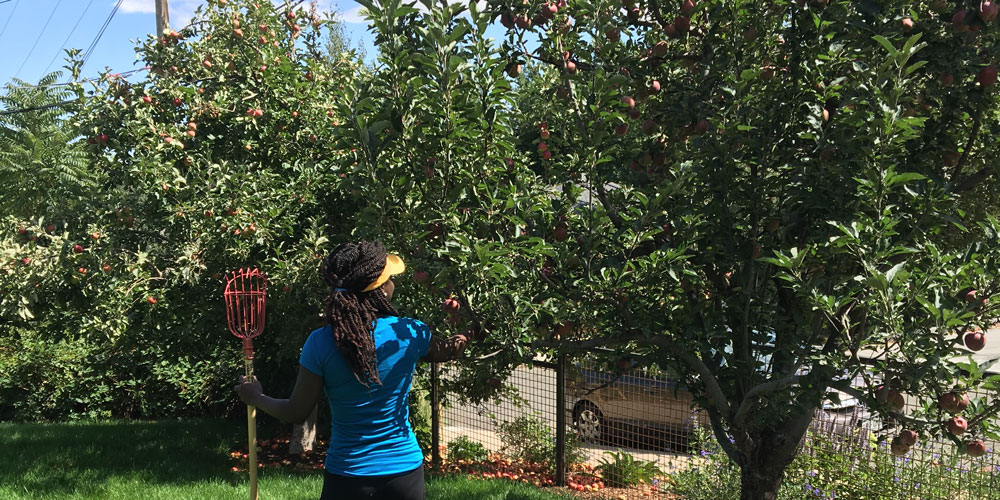 Boulder is an urban orchard with tons of fruit that grows on trees and bushes, and often falls and becomes a bear goldmine. Community Fruit Rescue began in 2014 and aims to reduce fruit waste, better coexist with neighboring wildlife and increase equitable access to healthy, local food by coordinating harvests around the city. Saturday, KGNU Reporter Claire Woodcock harvested apples in South Boulder with the group on a sunny, breezy Saturday.

With gardening tools at the ready, volunteers disperse to start picking apples. Bridgette Spewn had never had an apple until she came to America. She now loves them, and is very passionate about sharing them.

Spewn didn’t know she was moving to a city where apples are bountiful. She and her son came here two years ago and she says it was shocking to discover the amount of apples rotting on the ground. Apple picking soon became an ritualistic activity for when she went on walks with her son.

“When I see it actually being wasted, I’m like, “Oh, there are a lot of people in Africa hearing about apple but haven’t had it before.’”

That was two years ago. Today, Spewn is sharing her passion for reducing food waste with others by volunteering with Community Fruit Rescue. This is a newer nonprofit that organizes harvests throughout the city.

“I’m glad that I can help and I can give it to a good cause and it’s not wasted.” 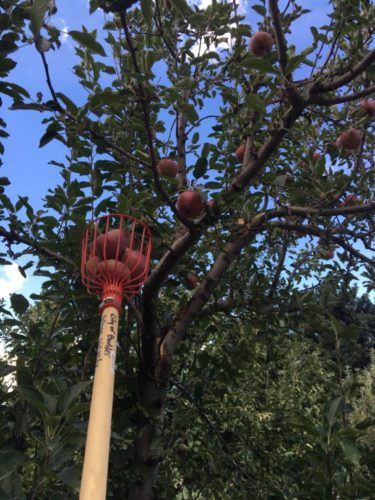 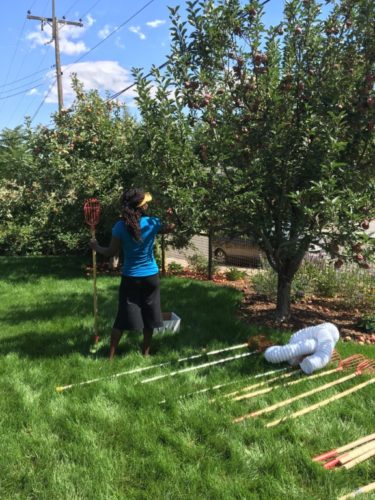 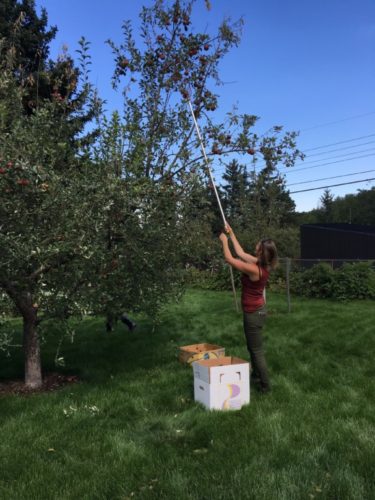 Volunteers congregate to gather fruit from tree owners who register their arbors online with the group. They wait until the fruit grows, and then Community Fruit Rescue shows up, picks up then donates the fruit.

“It’s super terrific to have all of these dear volunteers

Today we’re picking the apple trees in Susan Osbourne’s front yard. Osbourne, a retired city planner, mayor and council person is out here with us. She says she’s been cultivating a mini apple orchard in her yard for nearly 27 years.

“This part of town, west of 9th up to the mountains, especially west of 6th, was once an apple orchard, owned by a guy named Marinus Smith around the turn of the century.”

That was before she knew about the bears. Osbourne says that in recent years, she would spot 3 maybe 4 bears in her yard looking for apples. But she says she hasn’t had any run ins with bears yet this year. Val Matheson, the city’s Urban Wildlife Conservation Coordinator confirms that no bears have been euthanized for coming into the city this year, a decrease from past years.

Spewn says she’s scared of bear but her fear isn’t some kind of phobia somewhere out of the ordinary. Boulder is a city that’s really close to the mountains; so naturally, the region is full of wildlife. Black bears included. And fruit that hangs off trees for long periods of time or is left on the ground throughout large pockets of the city. Bears sense that.

“I would do anything to make sure that they stay in the wildlife happy there so that they don’t come in the neighborhood. So if it’s picking it up and going to give it to them in the wildlife, yeah, I’m for it.”

Hannah Tirrell-Wysocki is the Program Coordinator for Community Fruit Rescue. She says that their goal is as much an effort to keep bears out of the city as it is to protect them.

“What we’re doing is really an effort to keep them away from the city so that we’re limiting those negative interactions and hopefully kind of creating a better relationship between humans and bears.”

Tirrell-Wysaki says that her organization’s current focus revolves around harvesting the city’s excess apples. But not all of those apples are fit for human consumption. The bad apples actually go to the Wildlife Sanctuary in Keensburg, where they are frozen and are given back to the bears that want them.

“When they come into town, they’re coming into town for food. And if they come into town and they get rewarded by finding fruit trees, or unsecured trash, then they become used to being in town. And that’s a problem because they’re a large animal and if there’s conflict with people, the people in the neighborhood don’t want that bear in the tree.”

That was Brenda Lee. She is the founder of Boulder Bear Coalition, a nonprofit partnering with Community Fruit Rescue to find more proactive ways to keep bears from coming into the city. Because when a straggler comes back, she says that the chances of that bear being euthanized are pretty serious.

Community Fruit Rescue is actually an offshoot of Boulder Food Rescue. The two groups just sort of came together to promote both the local food movement and carbon emission reductions. But the other part of it, besides the bears, Tirrell-Wysaki says, is that the group aims to eliminate the price barriers that prevent everyone from enjoying fresh fruit.

“Having these volunteers come out and interact with the tree owners can be a really fun time and I think it really strengthens our communities in Boulder.”

One-third of the pickings will go to local homeless shelters, food banks and soon the Boulder Valley School District. The other shares are divided amongst the to volunteers and the tree owner. If you’re interested in registering a fruit tree or volunteering, go to www.fruitrescue.org.

Because you know what they say: An apple a day keeps the bears away.