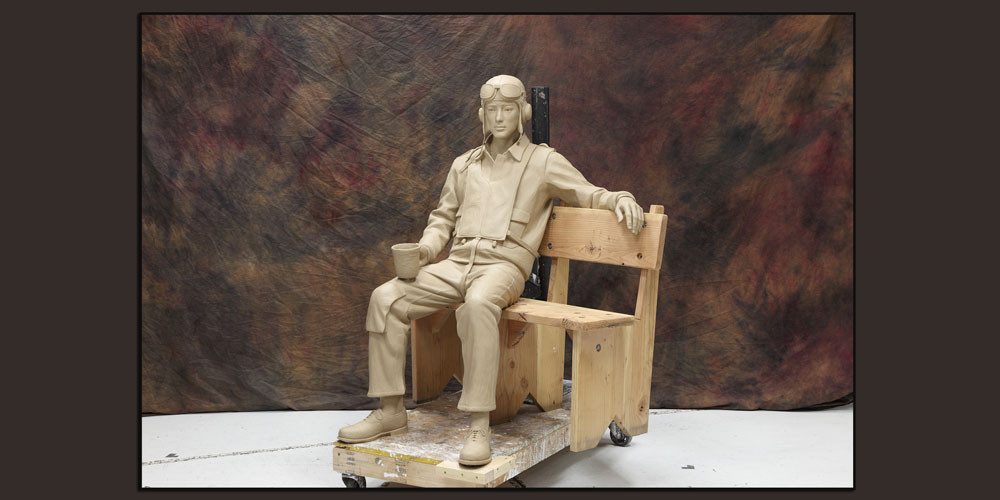 “I feel I’ve done what I promised to do.”

93 year old Frederic Arnold, a sculptor who lives in Longmont, is the sole survivor of a group of fighter pilots who served together in Europe in World War II. 12 out of 14 pilots in his squadron were killed during the war. Major Arnold has dedicated himself to honoring those who were killed in the war.

For the past 5 years, he has worked on creating a fitting memorial to his 12 comrades that were killed during the war.

Arnold, a renowned artist has finished a clay sculpture “Lest We Forget: The Mission” featuring 12 life sized clay figures of the 12 fallen pilots that will ultimately be cast in bronze.

Arnold says he feels he has fulfilled his promise to memorialize his comrades “I feel I’ve done what I promised to do but there’s still a little edge on it, I have to see it, see it in the museum.”

When completed the sculpture will be loaned to The National WWII Museum in New Orleans where it will be displayed on the Museum’s six-acre campus. The plan is to have the sculpture completed and on display by next year to pay tribute not just to Arnold’s 12 fallen comrades, but to honor the 88,000 fallen American aviators who lost their lives in WWII.

Update: On August 6th , 2016,  the statues were unveiled at the Wings over the Rockies Air and Space Museum.

To learn about the project, see images of the finished clay figures and learn how you can help, visit LestWeForgetSculpture.org.  (All photos courtesy of Jafe Parsons.)