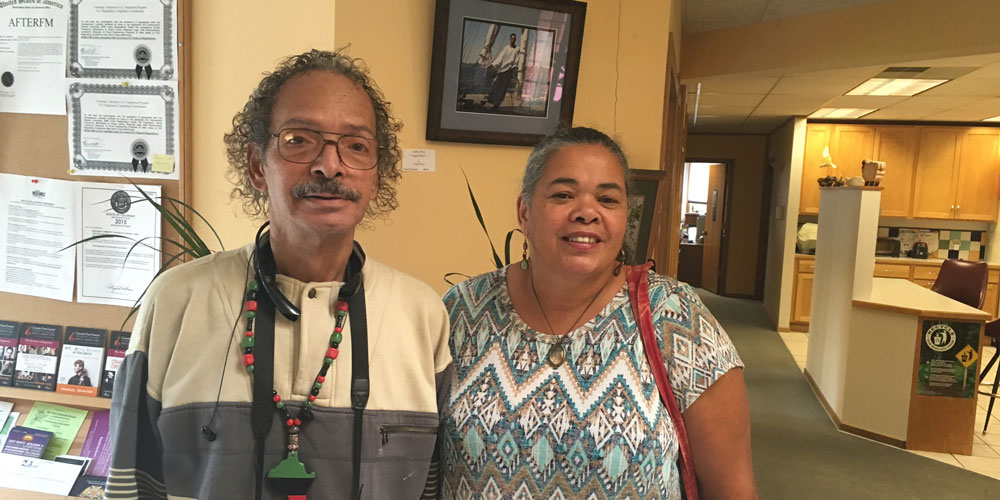 “To me mass incarceration and the failure to release people within the proper time frame is genocide.”

Sekou Kambui spent more than 40 years incarcerated in Alabama State prisons for the murder of two white men in Alabama that he always maintained he never committed.

Kambui ( William Turk) was granted parole on June 18, 2014 after years of work on the part of supporters who said that he was being punished for his civil rights activism in the 1960’s turbulent South. He first became involved in the civil rights movement in the 1950’s and soon became a member of the Black Panthers.

While incarcerated, Kambui educated himself in law and provided legal advice for other prisoners. This he said made him very unpopular with the prison authorities, prompting them to move him from prison to prison.

“I chose to work, and what kind of work did I know how to do? The only thing I knew how to do because I had been brought up in the civil rights movement, was to organize, to function as a community organizer. To function as an agitator against the brutal violence that was being perpetrated and perpetuated against incarcerated people.”

Kambui has criticized the Alabama prison system for not releasing prisoners after they have served their sentence. He is also critical of prisoners not receiving appropriate medical care. Shortly after his release, Kambui was diagnosed with colon cancer, something that was never addressed while he was in prison. “The serious indifference, the callous indifference shown to medical needs of incarcerated people. Plenty of individuals have died from that callous indifference to their serious medical need, merely because the state didn’t want to pay the money for their medical treatment.”

Since his release, The Free Alabama Movement has continued the work of raising awareness about the plight of prisoners. Kambui says he doesn’t consider himself free just yet, given the amount of work he feels has has to do in raising awareness of the issue of mass incarceration.

“To me mass incarceration and the failure to release people within the proper time frame is genocide.”

Audri Scott Williams, author of Awakening the Heart of the Beloved Community, has been working since 2000 in organizing peace walks around the country. “We’ve gone into areas where there has been a lot of violence and do a walk through the community with the community and later get reports about how crime has gone down.”

Scott Williams says their goals are to raise awareness, educate, empower and be in service. “Walking through the community and planting a pole opened up the community so the kids could go back outside and play, the parents could be out with the children and it was no longer a place where the drug dealers and those that were committing violence could control.”

The Red Flame for Freedom movement makes connections between childhood poverty, mass incarceration and human trafficking “all of them prey upon the most vulnerable in our populations.”

Scott Williams says it is urgent that we address this issue given that there are 15 million children living in poverty in the US.

“When you look at children in poverty, you look at the vulnerabilities that get created, the cradle to prison pipeline… we’re finding more and more food scarcity issues, food deserts, you’re talking about educational systems that have basically collapsed within some of our inner cities and rural areas as well as reservations. You’re talking about high incidents of mental issues, it’s dealing with some say post-traumatic stress syndrome – I think it’s right here…current stress…it’s the stress of living in that type of environment.”

On Saturday, July 23rd the World Peace Walkers and Partners in The Red Flame for Freedom movement will be coming to Boulder to raise awareness about the proliferation of modern day slavery experienced through sex trafficking, human trafficking, mass incarceration, and children in poverty. Modern day slavery is not simply a foreign issue, it is also an American issue and alive and well in Colorado.

Sekou Kambui joins Audri Scott Williams and Karen Hunter from the Red Flame For Freedom Tour, and local experts on the issues of childhood poverty and human trafficking. The panel will be followed by a potluck dinner and an opportunity for further conversation about how we can get more actively involved in working on these critical issues.

The Red Flame For Freedom event will be held in Plymouth Hall at the First Congregational Church, 1128 Pine Street, in Boulder. Find out more at TheRedFlameForFreedom.com or email Freedomwalks.stf@gmail.com