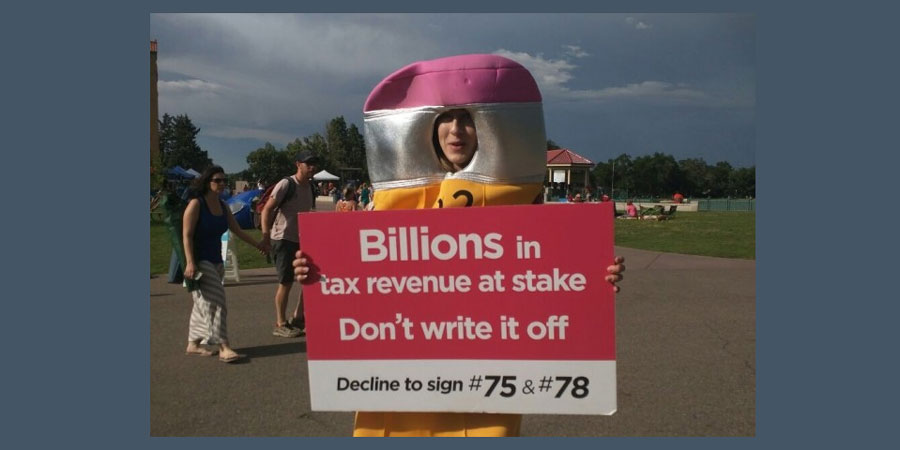 “What we’re seeing is people who are angry, swearing at us, clear up from trying to prevent other people from signing.”

The Yes for Health and Safety Over Fracking campaign behind initiatives 75 and 78 is reporting harassment of petitioner signature gatherers. The campaign says there have been at least ten separate incidents in several Colorado cities including Denver and Boulder, where local volunteers and paid circulators collecting signatures  have reported being followed, yelled at, and physically threatened by unidentified people repeating oil and gas industry talking points.

Ballot initiatives 75 and 78 would respectively permit Colorado communities to pass restrictions on fracking near their neighborhoods and require that fracking wells are set back at least 2500′ from homes and schools.  The campaign reports one case where an aggressive man lectured people who had already signed a petition, forcing them to cross their names out. Other canvassers reported being followed, yelled at, and threatened throughout the day by a man in a vehicle. There have been social media threats of violence, demeaning language used in public places, and, in one case, an 84-year old canvasser was followed, repeatedly called “crazy,” and physically taunted while trying to walk away. Such acts of intimidation represent a violation of Coloradans’ civil and constitutional rights.

Karen Dike of the Yes for Health and Safety of Fracking campaign says they have seen an escalation in the number of incidents of aggression towards signature gatherers “now what we’re seeing is people who are angry, swearing at us, clear up from trying to prevent other people from signing.”

Dike says one group of young men who were harassing a signature collector told her they were being paid to do it, although they did not identify who was paying them.

The Colorado Independent reports a media campaign urging people not to sign the petitions for initiatives 75 and 78.  The Decline to Sign 30 second TV ads predict economic catastrophe following any restrictions on oil and gas development.  The ads voiceover says that “Your signature is incredibly valuable, don’t just give it away to some petitioner on the street.”

Documents obtained by The Colorado Independent show that the “decline to sign” campaign is part of an orchestrated, multi-year effort by both Colorado-based and national energy giants. One of their front groups is Protect Colorado, which funded the TV ad and is actively seeking to thwart citizens from qualifying the two measures for the ballot.